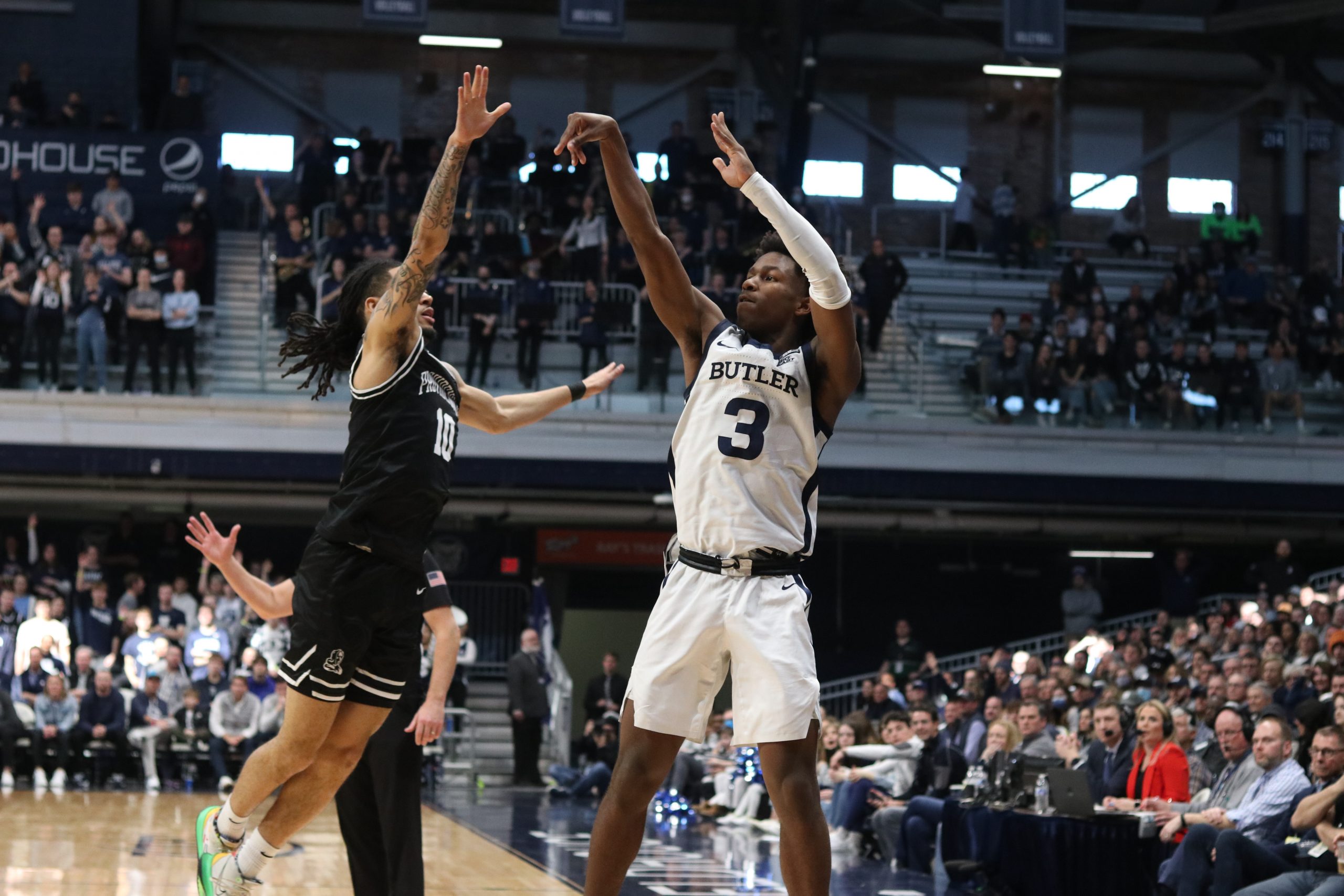 Chuck Harris raises up for a 3-pointer against Providence on Feb. 20. Harris leads the team in scoring with 10.8 points per game. Photo by Francie Wilson.

The Butler men’s basketball team once again were unable to find success in a close game, losing on the road to Seton Hall 66-60. The Bulldogs stayed even with the Pirates in the first half, going into the break tied at 34. Butler wasn’t able to keep up in the second half, however, and a late comeback attempt fell just short.

Bo Hodges led the Bulldogs with 25 points and seven rebounds. Bryce Nze also had double figures, logging in a double-double with 12 points and 10 rebounds. Chuck Harris, Bryce Golden and Simas Lukosius each scored seven points. On the Seton Hall side, four players scored in double figures. Jared Rhoden led the way for the Pirates with 17 points. Tyrese Samuel had 15 points to go with his two blocks and two steals. Alexis Yetna notched in his seventh double-double of the season with 10 points and 10 rebounds. Jamir Harris also scored 10 points for Seton Hall.

An abundance of scoring droughts

It seems as if every game Butler plays, there is bound to be a period of time when they will go several minutes without scoring. A reason for this may be that they cannot consistently make shots — Butler’s average field goal percentage of 42% is 10th in the Big East. Because of this, Butler averages 63.5 points per game, ranking them 328th in NCAA Division I. More times than not, this has resulted in losses for the Bulldogs.

A prime example of this occurred in the second half of this game. Butler started the half off even with Seton Hall for the first few minutes. After Butler took a two-point lead to make the game 38-36, it would take them almost six minutes to score a point and over nine minutes before they would make a field goal. In the span between made field goals, Butler went 0-8 from the field while Seton Hall went on a 20-2 run and shot 8-15 from the field.

Some credit has to be given to the Bulldogs for how they responded after, as it would have been easy to call the game over when they were down 56-40 with 6:15 left to play. Instead, the Bulldogs went on a 13-0 run of their own to cut the lead to three with 3:30 remaining. Having to come from behind like that is never easy though, and putting themselves in that position is what lost Butler the game.

Will there be a postseason for the Dawgs?

At a quick glance, most people would say no. Out of the six, potentially seven teams in the conference that are in the NCAA tournament conversation, Butler is not one of them. However, after what the Georgetown Hoyas did last season, it seems as if the Bulldogs still have a slim chance.

At the end of the 2020-21 regular season, the Georgetown Hoyas sat 9-12 and at the bottom of the Big East. It seemed like they were a lock to get bounced out of the Big East tournament early and go home. Instead, the Hoyas would make one of the most improbable runs in Big East history. After beating Marquette, they would take down Villanova and Seton Hall to advance to the championship game, where they dominated Creighton and took the Big East crown. Not only because of the wins they had but also the way in which they played them was what earned them a spot as a 12-seed in the tournament.

Will this happen to Butler? Probably not. But the window is ever so slightly cracked for the Bulldogs to follow the Hoyas’ gameplan. It certainly wouldn’t hurt Butler’s case if they were able to pull out a win in their last two games either.

Butler will play Marquette in Wisconsin on Feb. 26, then they’ll travel back to Indy for senior night against No. 8 Villanova on March 5.