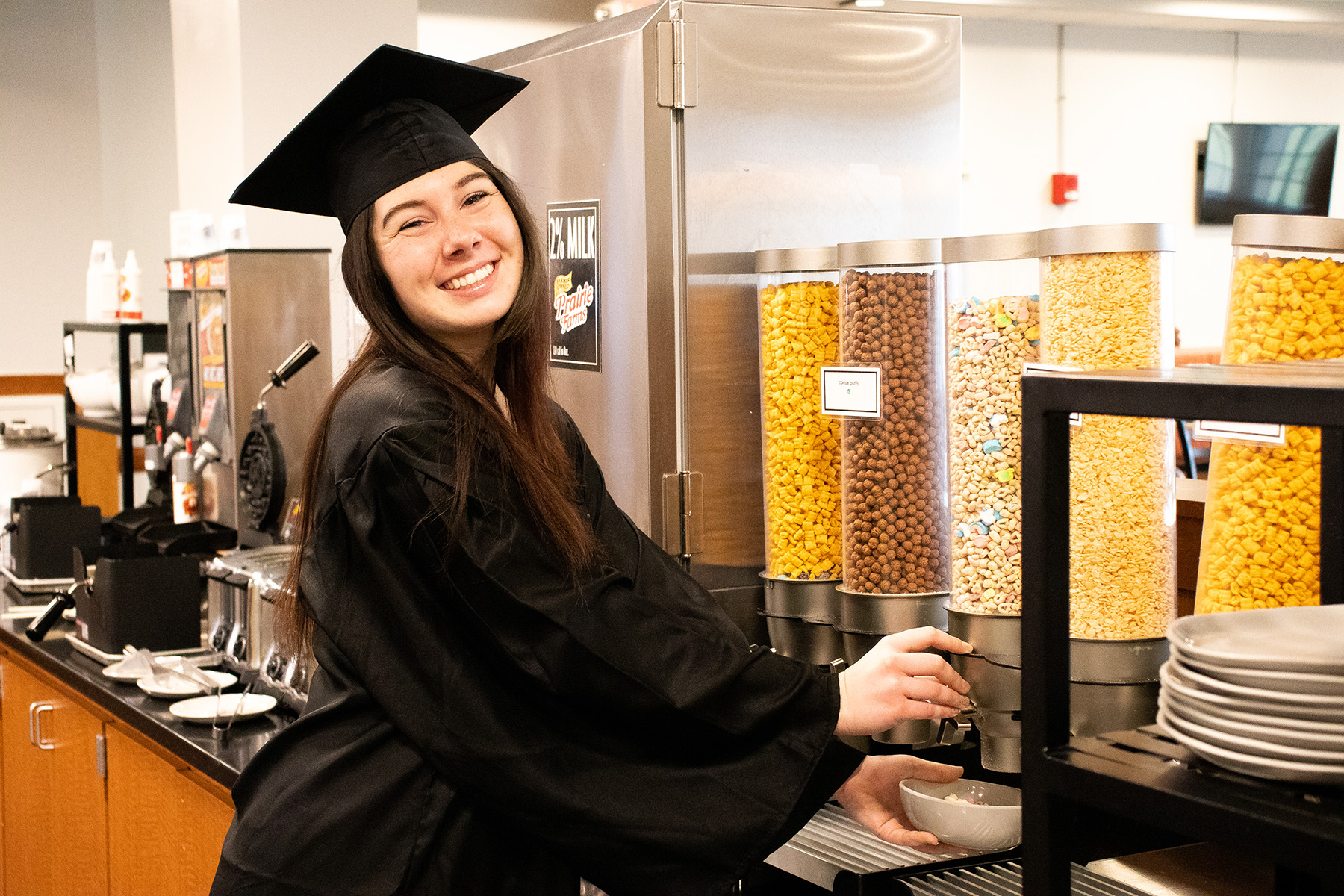 Co-opinion editor Katie Freeman celebrates never having to eat in this establishment again as she smiles through the pain of cereal being one of maybe three stomachable dishes in the Atherton Union dining hall. Photo by Ben Caylor.

If you step outside on a sunny day during the late spring at Butler University, you’ll likely see a few seniors loitering around the BU sign with a cap, gown and bottle of champagne. The experience of graduating from college usually includes photos to commemorate the accomplishment. After all, pics or it didn’t happen, right?

Seemingly every graduate has the same idea for photo locations: the Atherton bulldog, literally any sign that says “Butler University,” the Bell Tower steps, etc. Anything that screams “I went to Butler!” is fair game. I suppose that makes sense, but hear me out: these spots are boring, unoriginal and overdone.

I feel that a graduation photo should represent the collegiate experience in full and not just resemble an ad for a school that already hypnotized our bulldog-loving brains. To limit yourself to the basics is to discredit your own adventures throughout the less glamorous but frequently attended areas of campus. I don’t know about everyone else, but I spend a whole lot more time inside Jordan Hall than I do smiling and standing by the statue of Blue.

As a soon-to-be Butler grad myself, I took the liberty of providing some new, unique locations that make for the perfect photo op while still encapsulating the special kind of collegiate experience that is attending Butler University. Heed my advice, and in 30 years, you’ll be grateful to remember what your college years were actually like.

Freeman enjoys a bowl of Lucky Charms while also enjoying being mostly done with her degree. Photo by Ben Caylor.

This is a quintessential part of the college experience, especially at Butler. Despite attempts by the university to improve campus dining, the lamentation of eating at A-Town can be heard year after year. In fact, while the page has since been removed — a travesty, really — Butler earned a spot on the Princeton Review’s “Is it food?” list in its 2019 rankings.

I would reckon we’ve all spent our fair share of time in the dining hall, though it was more out of sheer necessity rather than a hankering for some overcooked — or undercooked! — chicken. In fact, nothing defined my first year on campus more than an anxiety-filled lap around the dining hall in a frantic attempt to find a place to sit during the height of the lunch rush.

As a chronic complainer, I hope to be able to tell my future children “Back in my day…” if they make a fuss about being served broccoli or any other seemingly offensive vegetable. “At least it doesn’t have bugs in it!” I’ll say. And because of my grad photos and extensive knowledge of the Collegian archives, I’ll have proof.

In your advisor’s office

A Hershey’s bar, which is graciously provided by Freeman’s advisor Scott Bridge, makes for both a delectable midday snack and a tasty commencement treat. Photo by Ben Caylor.

Whether you have the bestest most perfect advisor in the world — see above photo, for example — or someone who makes you want to rip your hair out, a trip to their office must be made when class registration rolls around.

Ah, classes. School. Learning. That’s what we go to college for — to get more knowledge.

What says to mom and dad, “Hey guys, I learned stuff and all the money you spent on my tuition was totally worth it!” better than a photo in the cramped office of the person who guided you into obtaining your degree?

I understand that the average student likely doesn’t step into their advisor’s office an average of three times a week, as I do. But if your advisor is as cool as mine — or yours is also mine — they might have a bag of chocolate on deck for you whenever you stop by for some pics. If not, maybe spare yourself the trip and skip this one.

Make the most of your tuition dollars by milking every last one of Butler’s unnecessary amenities — even if just for a graduation pic. Photos by Ben Caylor.

Another element that defines the Butler experience is the incessant construction: the ear-busting clanging of hammers and drills. The first building to actually be completed during my four years here was the Lacy School of Business, which I guess is now called Dugan Hall for donation-related reasons.

Speaking of money — that is all that LSB appears to consist of. The building is a flex in and of itself, designed for aesthetics rather than practicality. It is the architectural equivalent of shooting money guns loaded with tuition dollars into the air and shouting, “Woo, capitalism!” Its accommodations are somewhat absurd in comparison to those of other buildings on campus. What other building offers showers? Do business majors work so hard they cannot even walk back to their housing to bathe themselves?

Personally, I don’t spend a lot of time in LSB. However, I will say that the birth of the Butler Beyond program has shaped my college experience — even if just through the aforementioned construction noises — and LSB is the perfect signifier of the flamboyant spending across campus, which seems to ignore pressing structural issues in favor of ensuring the buildings are #Instagrammable.

Thus, a grad photo in the LSB showers truly encapsulates the capitalism-fueled greed of Butler; the ever-heightening cost of tuition, the overpriced everything, all in exchange for silly little things like showers by the classroom.

The yellow bucket in Jordan Hall adds the perfect pop of color to the dreary backdrop of the Jordan Hall stairs. Photos by Ben Caylor.

During Welcome Week, I was informed by my student orientation guide that no matter how in shape you are, you will always be winded after climbing up the stairs to the third floor of Jordan Hall. As someone who lives a generally sedentary lifestyle after abandoning all attempts of athleticism in high school, this certainly rings true.

Luckily, I am not alone in struggling to accomplish this Herculean feat. Students of all ages and levels of athletic prowess seem to suffer in their attempts to scale the stairs. As a student body, we find solidarity in huffing and puffing on our way to third-floor classrooms.

Anything vital enough to be mentioned during a Welcome Week tour deserves some recognition upon graduation as well. Some kind of honorary award should be given to graduates to commemorate the achievement of completing this task for four years. Perhaps a participation trophy in the shape of a staircase would work. “Congrats, grads! You will never have to do that again in your entire life.”

In lieu of that, though, a graduation photo will have to do. To encapsulate the decrepit vibes of the building, make sure you pose next to one of those buckets that catch the ever-present ceiling leaks.

Forever recall the silly little swab that determined your on-campus eligibility for two years with a grad pic in the COVID-19 testing center. Make sure to sanitize your hands first, though. Photo by Ben Caylor.

I recently was reminded by my Snapchat memories of the two-year anniversary of getting kicked off of campus due to the arrival of COVID-19. Or, as I like to call it, the worst day of my life.

Maybe that’s an exaggeration, but damn, that day sucked. It was during spring break of my sophomore year, and what was meant to be a break from the stress of schoolwork ended up marking the end of my on-campus experience for the semester.

I have a tendency to be a little dramatic, but I think I’ll always be bitter that an itty bitty microbe of a virus cut my deserved, normal four years on campus in half. Since 2020, a good chunk of my collegiate experience has been bound to the parameters of masks and tests and social distancing. Of course, these things were necessary for everyone’s wellbeing, but nobody really wants a pandemic to hit when they’d rather be frolicking on the Knoll.

For this reason, a graduation photo in the COVID-19 testing center seems appropriate. Perhaps in the future when I look at this one, I’ll be able to remember my four-day staycation in Ross Hall, or how I took a GHS as a second-semester senior instead of enjoying a nice glass of wine while studying abroad in Italy.

I am confident that there are so many other inventive spots just begging to be photographed. Please, spice up my Instagram feed come May 7, 2022. Otherwise, have fun in the line by the BU sign when April rolls around. I’m sure your pics will look great, just like literally everyone else’s will.