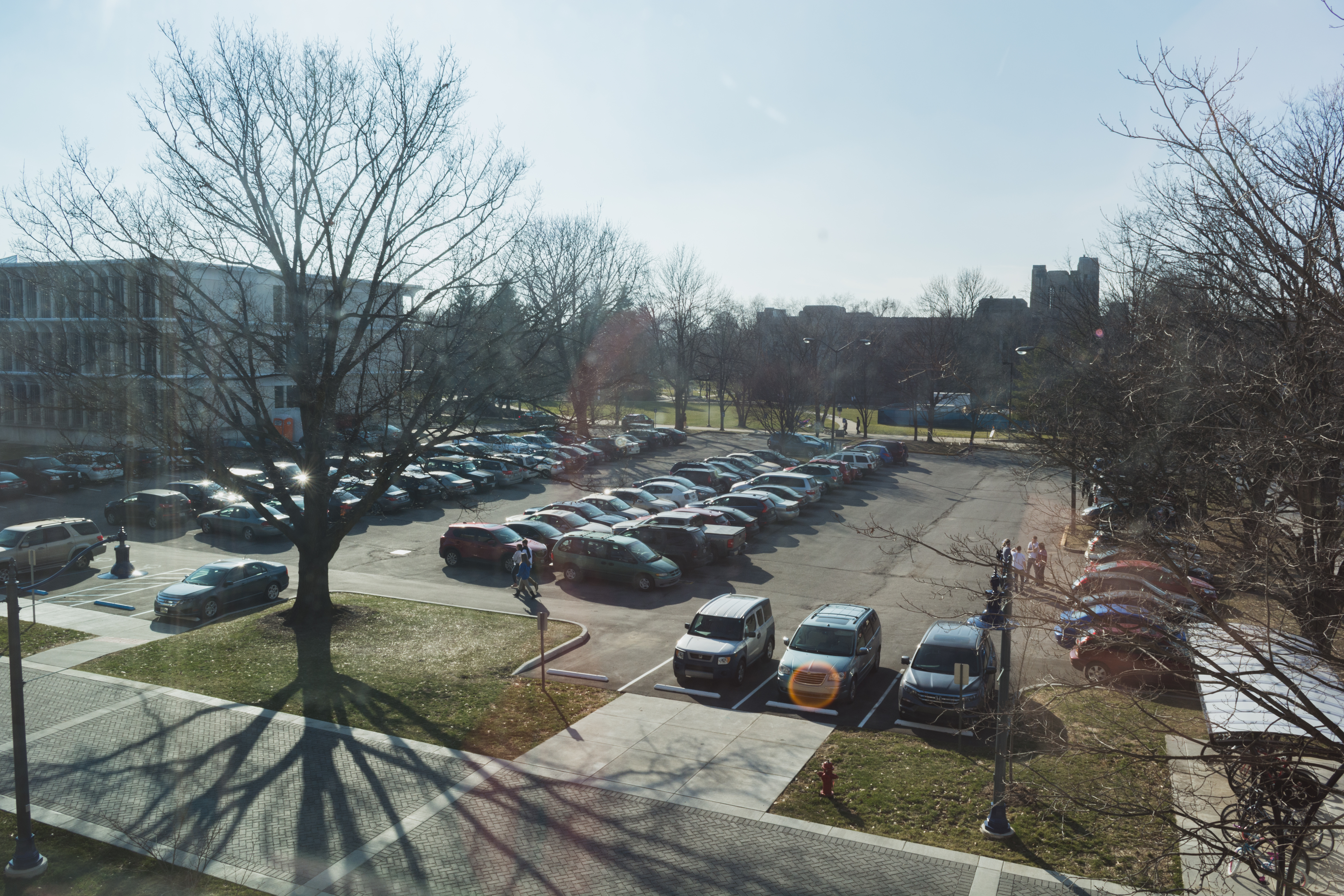 Photo of the future location of the Lacy School of Business by Adam Cvik.

Construction will begin this summer for the new Lacy School of Business building next to Irwin Library, behind Fairview where a faculty/staff parking, or A, lot is. Construction of the new Schwitzer Hall will cut a B parking lot in half. B permit holders live in ResCo, Fairview or Ross Hall. The electric substation near Jordan Hall will move to a Greek, or G, parking lot by Alpha Phi.

Jeremy Moore, associate director of parking and transportation, said he has been working closely with facilities because much of the upcoming construction ties into parking concerns. Rich Michal, executive director of facilities, said the new building will be able to hold the growing business college along with the Internship and Career Services office.

Moore said the A parking lot is frequently utilized by faculty and staff during the day because of its convenient location. He said he thinks it might be one of the first things that fills up on campus.

“For students, it’s also a convenience thing because… they use it in the evenings when they need to drop [something] off, or particularly on weekends when they want their vehicle to be close or they plan on going somewhere over the weekend.”

In talks of parking concerns, Michal quoted his predecessor, Mike Gardner, who was Butler’s  vice president for operations until 2011.

“He was famous for saying, ‘we don’t have a parking problem; we have a walking problem,’” Michal said. “Meaning that there is space and there will be space on campus, especially for faculty and staff to park in, it’s just you may have to walk a little further to get there.”

Moore said, “Some of that convenience will go away, but staff will still have a parking space on campus.”

After construction of the business college, Moore said the university anticipates more staff/faculty will move to the parking garage. He said there is around 1,500 staff/faculty parking on campus. Surface parking for A decals, Moore said, is around 700 spaces; at least half of them park in the garage.

The Collegian counted roughly 130 spots in the A parking lot next to Irwin.

Parking services was not able to provide official documentation to verify numbers of spots in the past, present and future.

Music professor David Murray is on the parking committee. The group is made up of various members of campus — including faculty, the Butler University Police Department and  from the Student Government Association representatives— and a Butler-Tarkington Neighborhood Association member. In Murray’s two years on the committee, he said all perspectives are seen when it comes to parking issues.

“Everyone has a finger in the pie,” he said. “There’s not just somebody who says, ‘This is the way it is so live with it.’”

Stephen Standifird, Lacy School of Business dean, said one of the early discussions of the move concerned the deduction of parking spaces.

“It takes a fair amount of parking away,” he said. “That is part of the reason from the very beginning I have been one of the biggest fans of the parking garage.”

Standifird said the parking garage is underutilized and will serve as a more efficient way of parking.

“There will be times when that new building is built, I will find myself parking in the garage especially in the winter time because that’ll spare you having to unbury your vehicle,” he said. “Even on hot, summer days parking under the shade of a covered garage is a lot more pleasant than walking out.”

Standifird said parking lots are a horrible way to do parking.

“It’s not like we can throw another parking lot on campus,” he said. “The central parts of campus were getting filled up… That’s why we built the parking garage before starting [Fairview].”

At the beginning of this school year, Moore said the university opened the fifth floor of the parking garage in anticipation for the elimination of B spots behind Schwitzer Hall. When deconstruction of the old dorm began, workers blocked off the majority of that parking lot. Now, there are 184 spaces on the fifth floor.

To mitigate loss of parking for all parties, Moore said some lots near Fairbanks and Schwitzer were combined B/G, A/B or A/G.

“When we heard faculty were losing A spaces by Fairbanks,” Murray said, “we asked, ‘Why can’t we make it an A-slash-whatever? Why does it have to be one or the other?’”

Murray said he believes parking has balanced out due to such combinations and the opening of another floor of the garage. He acknowledged convenience factors may be lost for some faculty.

“I play a huge instrument — I play the bass — so it’s convenient for me in cold weather and hot weather as well,” he said.  “So, I imagine people who work in Fairbanks who may have 30 pounds of something to carry, just to put that under their arm and walk over is a little bit of schlep.”

The dorm replacing Schwitzer should be completed by July 2018, and the business college building at the beginning of the 2019-20 academic year, but more construction is underway.

Moore said the university will lose roughly 20 Greek spots in the substation move. This semester, G parking spaces were sold out but Moore said he did not include this parking lot in the sold out spots.

A substation essentially generates and distributes electricity at a reduced voltage usable for consumers.

Michal said this is the last phase of a process that has been going on for a few years. He said the university chose to build a new substation that would be more reliable and reduce outages. If there is an outage, he said they will be able to isolate problem and reduce the number of buildings impacted.

On March 3 the university will block off the entire parking lot by Alpha Phi to begin construction. After completion of the substation — sometime in the summer —roughly 30 of the more than 50 spots will return.

“We believe that at this point, just taking that lot right now, just bringing those spaces offline, there are enough Greek spots to move to,” Moore said.

He said his job will be to monitor these spots.

“If we have an issue with people who purchase decals having difficulty finding a spot, we don’t want that,” Moore said. “And that will be my job to try and resolve where they can find a space so that they can reasonably park somewhere on the near south side, rather than the north end or the I lot. We don’t want people to have to do that, especially if they’ve paid for the $225 permit.”

With more construction on the table and parking alterations on the plate, Moore said he believes we are not losing or gaining parking. Rather, it will remain about the same.

Murray said he believes parking is balanced out because of the parking garage, but the parking committee is always open to hear more suggestions.

“It’s not a closed group,” Murray said. “We don’t live in some ivory tower. So, we are always open to hear people’s concerns.”

The parking committee meets the second Tuesday of every month in Atherton Union 201. These meetings are typically from 4-5 p.m. and open to the public.