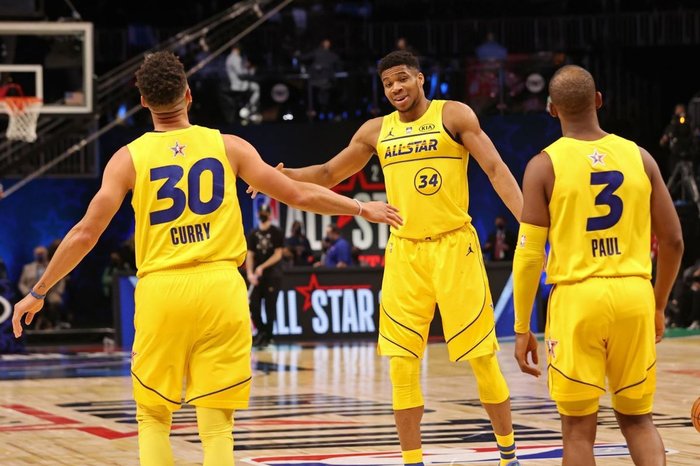 All-Star Games exist to reward players and to be a treat for fans. It serves as a break for fans from the monotony of the regular season with matchups that fans would not normally see. They allow the fans to see superstar players playing on the same team and competing at a high level.

The NBA is unique and exceeds the other leagues in allowing the fans to have the strongest voice in who they want to see play in the game. This amount of power appears to be more than the fans can handle on their own based on the voting results.

Fans have had the ability to vote for NBA All-Star starters since the 1974-75 season and were the sole voters until the 2016-17 season. The current players and members of the media were finally added in an attempt for some voting reform.

However, under the current voting system, the fans hold 50% of the vote with the players and media splitting the remaining 50%. The NBA All-Star Game is for the fans, so it makes sense that they would have an opportunity to vote for and select the players they would like to see in the game.

This does not seem so bad until you look at the fan voting results for this season. Klay Thompson finished fourth in Western Conference guard voting after only playing in nine games this year. In comparison, Dejounte Murray has played in 36 more games and is nearly averaging a triple-double this year, leading the league in steals per game and still received 1.4 million fewer votes than Thompson.

Malik Monk is having a strong season and shooting a career-best percentage from 3-point range, but is not close to the caliber of a player that Murray is — yet crazed fans voted for Monk over Murray. The lack of respect for statistically strong seasons leaves more deserving players on the outside of the bubble before the players and media have the opportunity to vote and make up the difference.

However, the most controversial selection this year is Golden State Warriors small forward Andrew Wiggins starting in the All-Star Game. Although Wiggins is playing well, he has not performed to the level that Utah Jazz center Rudy Gobert has. Gobert is leading the league in rebounds per game and is sixth in player efficiency rating, but has to wait to see if he will be selected when he should already be a starter.

The case can also be made for fellow Warriors forward Draymond Green. His all-around ability to impact the game on offense and his elite defense has directly led to the Warriors winning games. The Warriors record with Draymond playing is 28-6 and without him is 10-7. Draymond being on or off the court is the difference between the Warriors being an elite team and a team that barely stays afloat.

A major reason for the Wiggins push and his selection is thanks to a K-Pop star’s tweet. The tweet by Bam Bam received 37,000 retweets and each retweet was counted as a vote for Wiggins. The replies and sharing of the tweet made up a strong portion of his vote count, so Wiggins can thank Bam Bam for helping him reach his first All-Star game.

Social media sites have changed voting significantly and counting votes on Twitter has become the NBA’s reality and will continue to be. It goes back to 2017 and what some fans call the ‘Zaza Rule.’Warriors center Zaza Pachulia got the third most fan votes out of the Western Conference frontcourt spots and nearly became a starter despite only averaging 6 points in 18 minutes per game.

Fans continue to argue that they should have the final say in the voting, but being a starter in the All-Star Game is important to many players and to their legacy. For example, Dirk Nowitzki was never selected to start an All-Star Game by the fans. He was a late injury replacement starter for Yao Ming in 2007. This does not affect his legacy as he is already one of the best players in NBA history, but this could end up affecting more guys in the future. Another issue that fans do not realize is the possibility of a performance bonus being in a player’s contract. If a player is selected to the All-Star Game, the player is paid more money by that team as long as the agreed-upon bonus still keeps the team under the salary cap.

Until last year, Mike Conley had never made an All-Star Game. He was named by Adam Silver as a replacement for the injured Devin Booker. He is the epitome of an underrated player that was stuck behind other big names and on a small market Utah team. Fan voting kept him off an All-Star team for years and he most likely never would have made it until the injury to Booker happened.

Some other current players that fit this mold are Trail Blazers shooting guard CJ McCollum and Pacers point guard Malcolm Brogdon. They are criminally underappreciated and have yet to be rewarded. Brogdon even became one of the only members in NBA history to join the 50-40-90 club in 2018-19. Yet, they are once again going to miss out this year with both players having missed games due to various injuries. Brogdon and McCollum are not big-name stars, so they would have been in an uphill climb to be voted in anyway.

The solution is that the NBA needs to adjust the fan voting to not account for as much. If the fan voting percentage was 25% along with the media being 25%, that would leave the players having the remaining 50%. This still allows for fans to have an opinion, but leaves the players who truly know who should be their representatives in the All-Star Game.

Players can be biased towards their own teammates obviously, but they will not have the same issues as fans voting for undeserving players. The players voted for Draymond Green at the third frontcourt spot, so they can clearly be trusted to uphold the voting mantle. The current voting system will probably remain in place, but the same conversations will be recycled every year about someone being left out due to fan voting and fans will be unhappy until a change occurs.