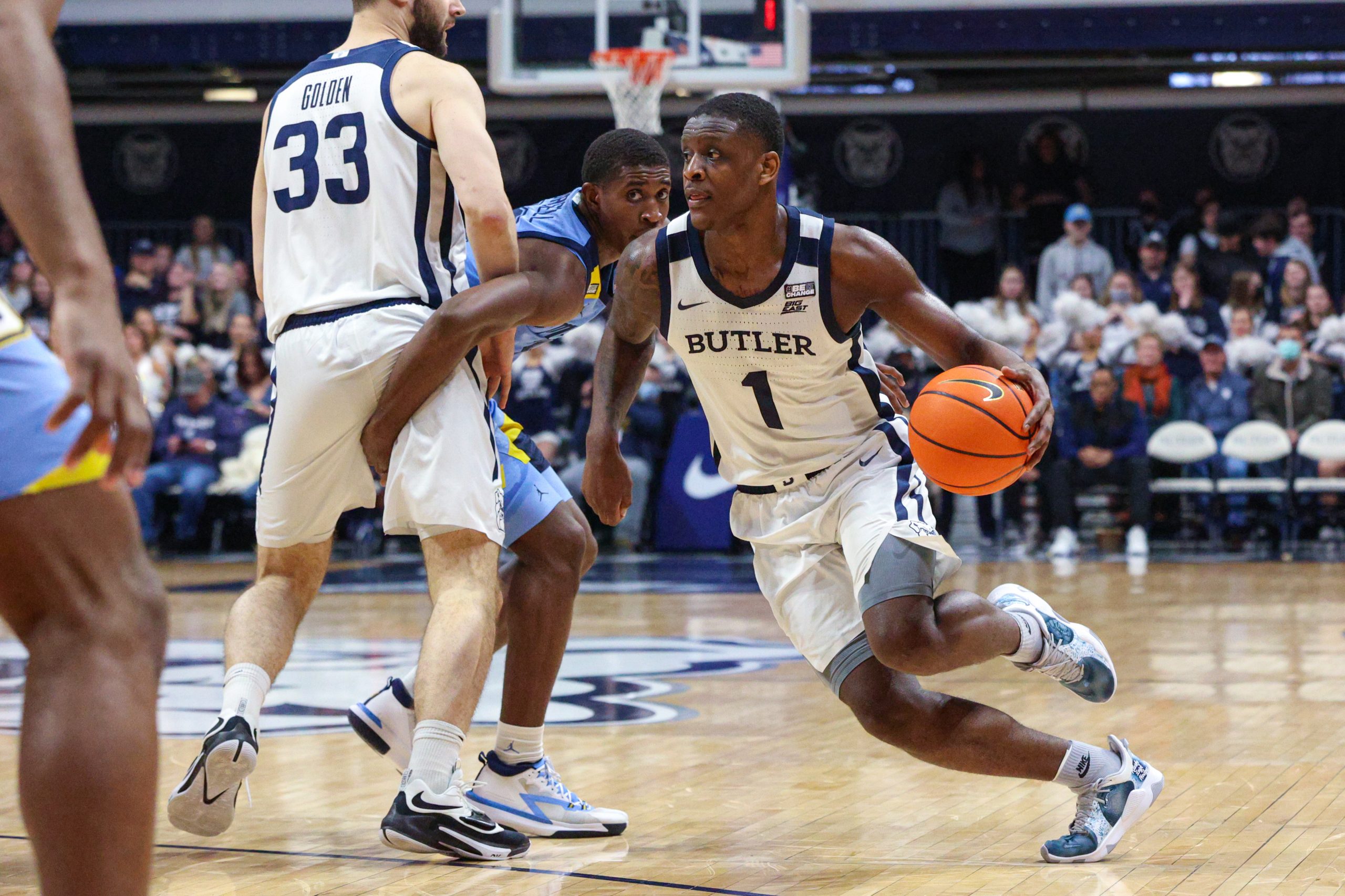 Bryce Golden sets a screen for Bo Hodges as Hodges drives into the paint in Butler’s win over Marquette on Feb. 12. Hodges is listed as a gametime decision for today’s contest against St. John’s. Photo by Claire Runkel.

Following two consecutive wins over Marquette and DePaul, the Bulldogs are back in action today to take on St. John’s in New York. This game was originally scheduled for Dec. 23 but had to be moved because of COVID-19 issues in the Red Storm program.

St. John’s won the first matchup in Hinkle Fieldhouse on Feb. 5, 75-72. Butler held a lead for 27 minutes in the first matchup but could not keep the Red Storm off of the free throw line which ultimately led to the Bulldogs’ demise. Chuck Harris had a chance to tie the game in the final seconds but missed a 3-pointer, and St. John’s escaped Hinkle with a win.

St. John’s, Butler and Seton Hall are all within a half-game of one another in the Big East standings, with Butler having played one more game. A Butler win over St. John’s would vault the Bulldogs ahead of both teams and into seventh in the Big East. A loss would likely mean Butler would hold the nine-seed heading into the tournament.

Here’s what you need to know ahead of the matchup with large implications in the Big East standings.

A little over an hour before Tuesday’s contest versus DePaul, both Hodges and Nze were declared out with a muscle strain and a knee injury, respectively. Both players are listed as gametime decisions for today’s game against St. John’s.

Hodges and Nze are Butler’s top two leading rebounders, on a team that is last — by a long shot — in the Big East in rebounding. Despite this clear advantage for DePaul, the Bulldogs still outrebounded the Blue Demons in the first half while featuring a starting lineup of four guards — Aaron Thompson, Chuck Harris, Jayden Taylor and Simas Lukosius — alongside Bryce Golden, who played limited minutes in the first half because of two early fouls.

However, the Bulldogs were dominated in the second half on the boards, and if it wasn’t for late-game heroics by Lukosius, Butler would have left Chicago with a loss.

While the small ball lineup did work at times for Butler, the impact of not having Nze or Hodges was felt. Along with being the best rebounders, the pair are also the best interior defenders on the team and are the top two Bulldogs in blocks per game.

Head coach LaVall Jordan’s strategy of playing just seven or eight players also goes out the window without the two starters. It puts a lot of pressure on Bryce Golden to not pick up fouls, and nearly every coach in the country would know to attack Golden in this scenario to get him into foul trouble and force Jordan to reach deeper into the bench.

Ty Groce, John-Michael Mulloy and D.J. Hughes all played well against DePaul with Golden playing limited minutes, but lack the offensive upside of the frontcourt starters, putting more pressure on the backcourt to hit big shots.

If Hodges and Nze both remain out for Butler’s trip to New York, winning the game becomes that much more difficult.

In February, St. John’s has taken care of business against the three unranked teams they have played and lost tight games to their three ranked opponents. The Red Storm are 3-0 on the road and 0-3 at home in that stretch.

St. John’s beat Butler, Georgetown and previously ranked Xavier, all on the road, by a combined 29 points. The team also lost by four points to current No. 8 Providence, by six to current No. 10 Villanova and by three to current No. 24 UConn, all at home. The Red Storm are just 2-4 at home in Big East play, with both wins coming against the bottom two teams in the conference, Georgetown and DePaul.

St. John’s has time going against them too. The team played Xavier in Cincinnati on Wednesday night, having just over a day to prepare for the Bulldogs to come to town. The Red Storm also had just one day in between games when they traveled to Hinkle, and while they started off slow, they ultimately came away with a win.

While both teams have a lot to play for, St. John’s may have a bit more on the line. An at-large bid to the NCAA Tournament is almost certainly out of the question for Butler, but a strong finish to the regular season and a couple wins in the Big East tournament could be enough for St. John’s to sneak in. A loss at home to Butler would not only have the Red Storm drop to ninth in the standings, but also kill any hope to make the NCAA Tournament without stealing the Big East crown in Madison Square Garden.

Led by the Big East leader in scoring, Julian Champagnie, St. John’s will be a tough task for Butler. However, in the first matchup Butler laid out the strategy for beating the Red Storm for most of the game, but fouled far too much in the second half and gave St. John’s free points instead of forcing them to hit tough shots. If Butler can play with the same defensive intensity without excessive fouling, the Bulldogs have a good chance of jumping to seventh in the Big East standings by the end of the night.