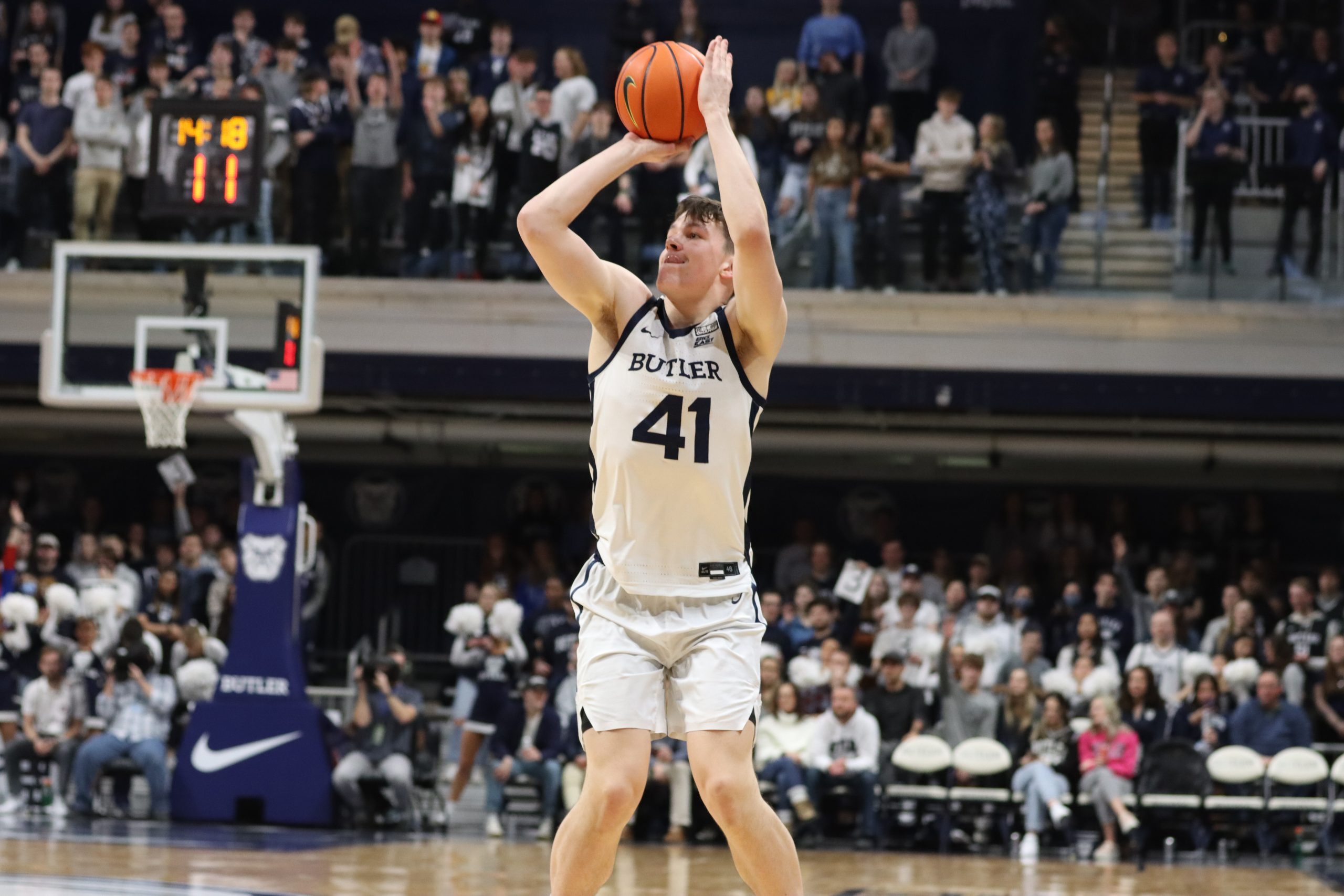 Simas Lukosius pulls up from deep against Marquette on Feb. 12. Lukosius scored a career-high 19 points in Butler’s 73-71 win versus DePaul on Feb. 15. Photo by Francie Wilson.

The Butler men’s basketball team, propelled by late-game heroics, was able to pull away late from DePaul in a 73-71 win in Chicago. This win came without two of the most important players on the team, as starters Bo Hodges and Bryce Nze were unavailable for the game. Freshmen Simas Lukosius and Jayden Taylor were given the nod to start, as Butler would boast a smaller lineup than normal.

Simas Lukosius led the Bulldogs with a career-high 19 points. Chuck Harris was right behind him with 18 points and five rebounds. Jayden Taylor had 12 points, struggling from the field but going 6-6 from the free throw line and also bringing down five rebounds. Aaron Thompson rounded out a balanced scoring attack for the Dawgs with 11 points and three assists.

The first half of the game was close throughout, featuring three ties and 11 lead changes. Butler was aggressive on the boards, outrebounding DePaul 19-15 without their two best rebounders. However, the Bulldogs had eight turnovers — including three travel calls — which gifted 12 points off turnovers to the Blue Demons and allowed them to keep the game tied at the end of the first.

In the second half, DePaul began to turn things around. They came out of halftime with more intensity than Butler, dominating them 12-3 on rebounds in the first few minutes. The Blue Demons would lead for most of the second half as the Bulldogs went nearly five whole minutes without scoring a field goal. Lukosius hit a 3-pointer at the 9:02 mark to end the drought and make it 56-50 in favor of DePaul. After some more back-and-forth action down the stretch, the game was tied at 69 with 35 seconds left.

With six seconds left, Lukosius made arguably the shot of the year for the Bulldogs as he would bank in a contested 3-pointer. He would follow that up with a clutch rebound off of a missed free throw to ice the game in the closing seconds.

Let’s go beyond the box score on a game where Butler revealed how much fight they have in them.

Comparing Lukosius to Luka Dončić is something that you can’t hide from anymore when talking about the 6-foot-6-inch guard from Lithuania. Whether it’s the flashy passes, the clutch shots he makes down the stretch or the skillful ball-handling, there’s no question that the talent is there for Lukosius.

In the past two games, he has scored 33 points on 13-21 shooting. In the win against DePaul, Lukosius scored 15 of his 19 points in the final 10 minutes of the game. He has improved tremendously as the season has gone on, limiting his turnovers and becoming a reliable option on offense down the stretch.

Lukosius has already won two Big East Freshman of the Week awards this season. There may be an opportunity for him to be on the All-Big East Freshman Team — Chuck Harris was on the team last season — as well if he continues to make an impact on the court.

For only the fifth time this season, the Bulldogs shot the ball at a clip of 50% or better from the field. It is also the ninth time they have shot at least 80% from the free throw line. For a team that usually allows their opponents to shoot better than them from the field, Butler has been able to turn it around as of late.

One wouldn’t match a good offensive night with only having four total assists as a team, but it worked well enough for the Bulldogs in this contest. There are a couple of flaws offensively that the Dawgs do need to work on, however. Going long periods without a field goal and settling for late-in-the-shot-clock 3-pointers are things Butler needs to cut down on. Those problems will be addressed much better when Nze and Hodges return.

In the last eight games Butler has played, seven of them have been decided by seven points or fewer. The Bulldogs have gone 4-4 in that stretch, but it has been evident that there was growth within every game. Following the win against Marquette, Golden Eagles head coach Shaka Smart described it in a perfect way, “They’re right there and their emphasis is to play a few possessions better.”

It’s hard to emulate a first half like the Bulldogs had in their win against Marquette every game, but that game was a huge confidence booster going forward. It reiterated to the team that when they play “The Butler Way,” they can compete with high-level talent.

The Bulldogs’ next contest will be on the road in Queens as they take on St. John’s for the second time this season. Tip-off will be Feb. 18 at 5 p.m.