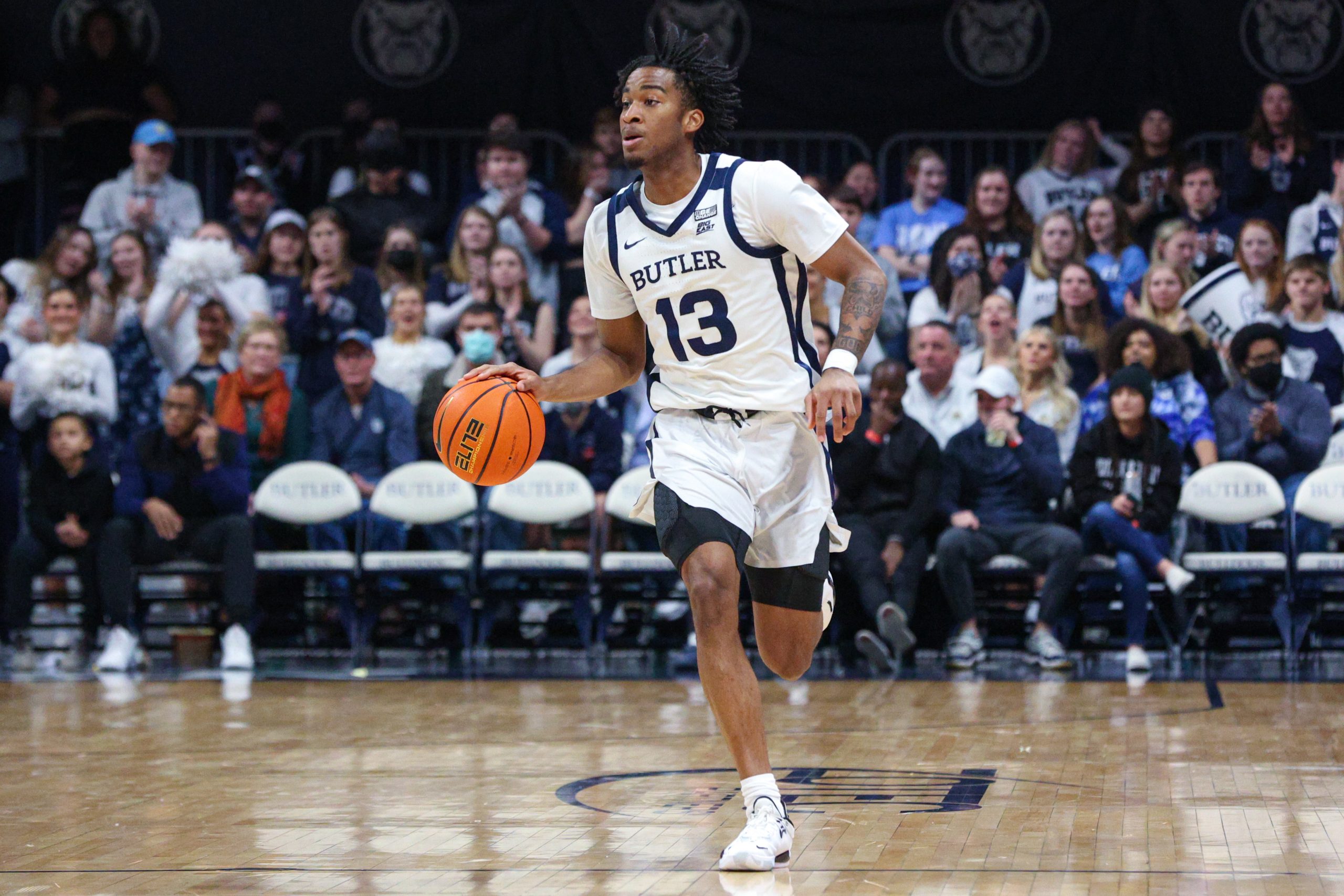 Freshman Jayden Taylor led the Dawgs in scoring with 19 points in their 91-57 loss to St. John’s on Feb. 20. Photo by Claire Runkel.

The Butler men’s basketball team will have what is likely to be a jam-packed Hinkle Fieldhouse coming to watch them play the eighth-ranked team in the country, the Providence Friars. In their first meeting this season on Jan. 23, the Friars held off the Dawgs in a close 69-62 game. Butler kept it close all game, but late-game heroics from Nate Watson helped Providence pull away late.

Nearly a month later, both teams have gone in differing directions in their recent play. While Butler has continued — for the most part — to keep games close since Jan. 23, they have gone 4-4 in the stretch. Their point differential was a combined seven points in three of their losses, but a beatdown by St. John’s raised it up all the way to 41 points.

Providence, on the other hand, has continued to ascend. Since playing Butler, they have only played six games but have won five of them. Two of those wins came against ranked opponents at the time in Xavier and Marquette. The one loss was to Villanova, where they had a chance to win before Colin Gillespie said ‘enough of this.’ As of right now, they are ranked No. 8, but that will likely change as Nova will move up with their win against the Friars.

Regardless of where Providence is or will be ranked, they are more than good enough to give Butler another loss like St. John’s just did. The Bulldogs will need to be on their A-game if they want to keep this game close and find a way to defend their home court.

Here’s what you need to know ahead of the Bulldogs’ second matchup of the season with the Friars.

Who: Butler vs. No. 8 Providence

This is by far the most important question that Bulldog fans will be asking themselves today. After going down suffering a muscle strain in the win against Marquette on Feb. 12, Hodges has been sidelined for the last two games. It is unclear how serious the injury is, or if a week of rest will be enough time to recover from it. If he is unable to go, then it will be a big hit to Butler’s chance to keep up with Providence.

Hodges’ first game and first start of the season came against the Friars back on Jan. 23. He was everywhere in that game, logging 17 points, eight rebounds and two steals. His ability to take the ball pressure off of the other guards, push the pace, and defend multiple positions is what made the game so close. Without him, the offense is far more likely to stagnate at times like it usually does. The Bulldogs’ rebounding and defense will take a hit too, as he elevates the team greatly in both of those areas.

There’s a reason that Providence is currently ranked No. 8 in the country and first in the Big East — there aren’t a lot of areas in which they aren’t proficient in. As a team, they rank fifth in field goal percentage, fourth in free throw percentage and third in scoring defense within the Big East.

Individually, they have players excelling in multiple areas. Noah Horchler is second in the conference in rebounds per game with 8.4. Nate Watson is first in field goal percentage at 55.8%. Lastly, Al Durham is shooting 84.7% from the charity stripe, ranking third in the Big East.

Butler will have a tall task keeping all of these players at bay. If they can get back to the form they were playing at before the St. John’s game, Butler can keep it close and give themselves a chance late.