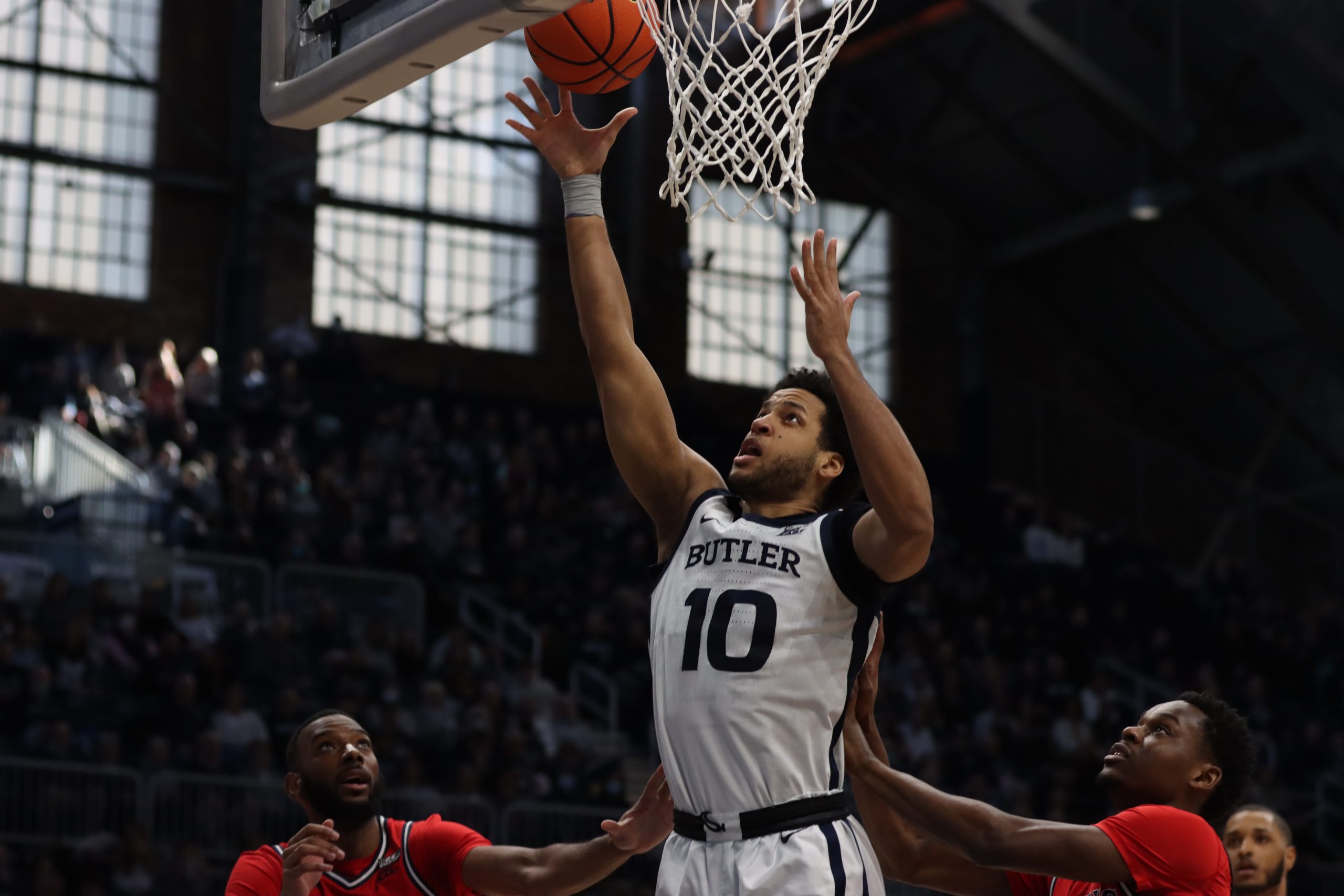 Forward Bryce Nze makes a layup against St.John’s in a matchup on Feb.5 at Hinkle Fieldhouse. The men’s basketball team has lost their last three games by just one possession. Photo by Francie Wilson.

The men’s basketball team fell just short of a comeback, losing to No. 21 Xavier 68-66 in the final seconds.

With six minutes to play, Butler trailed by 14 points but cut the lead to four with just under a minute left. Jayden Taylor grabbed an offensive rebound with 15 seconds left, but Chuck Harris missed an open floater which would have cut the lead to two with eight seconds left. Xavier then went to the line after a foul and sank two free throws putting the game out of reach with not enough time remaining.

Taylor and Harris finished with 18 points each, while Xavier’s Zach Freemantle scored 23 for the Musketeers.

The men’s and women’s track team had a successful trip to South Bend, Indiana this weekend as the team set multiple personal bests and a pair of school records at the Meyo Invitational.

Graduate student Simon Bedard finished second in the Meyo Mile with a time of 3:58.34, ranking his time the third fastest in the Big East this season and breaking a program record that stood since 2010.

On the women’s side, Niki Ezeh established a new program record with a jump of 5.59 meters. In the 3000 meter race, Morgan Werner, Maddie McLain and Laure Bertrand all posted personal bests.

The women’s basketball team’s matchup against the UConn Huskies was canceled due winter weather issues that hit the Northeast and Midwest this past week. It is unknown whether the game will be rescheduled for a future date.

For the second consecutive game, the Butler men’s basketball team fell just short of a win, losing to St. John’s 75-72 in the final seconds. The Bulldogs had a chance to tie the game at the buzzer, but Chuck Harris air-balled a contested three and St. John’s left Hinkle with a win.

Butler men’s golf left Big East match play winless, after dropping every close match in Palm Beach, Florida. Butler started off the tournament by dropping the team’s opening match in a 4-0-2 decision to UConn. Nick Williams and Raymond Sullivan pulled out ties to each pick up a half-point.

In the second matchup, the Dawgs lost a tight 3-2-1 decision to St. John’s. The two points for Butler came from Williams and Weston Guili. Williams picked up a 4&3 win over Doug Beney, while Guili beat Ryan Rittberger 3&2. Sullivan and Tyler Gerbavsits of St. John’s played to a draw.

In their final matchup, Butler fell to Sacred Heart 3-1-2. Williams earned the Bulldogs a point in his match with Jason Pelley, with Williams winning the match one-up.

Guili was matched up against Jonah Camarillo, while Sullivan was paired against Marcus Lim. Guili and senior Sullivan halved their respective matches.

Women’s Tennis lose a close one at Dayton

The Butler women’s tennis team were outdone by the Dayton Flyers, 3-4, in a competitive matchup in Miamisburg, Ohio. Butler lost at No. 1 doubles, but Sara Linn and Logan White claimed the win for No. 2 doubles. Dayton got the edge in doubles by beating out Norah Balthazor and Veronika Bruetting in the No. 3 spot.

The Butler men’s tennis team was victorious over the Illinois State Redbirds, 5-2, at the Butler Tennis Bubble.

The Bulldogs won doubles with wins by duos Thomas Brennan and Alvaro Huete Vadillo at No. 1 and Patrick Joss and Zach Trimpe at No. 3.

Brennan also picked up a point for Butler with a straight sets victory over Pol Botifoll Rius at No. 1 singles 6-1, 6-1. Michael Dickson, Borja Miralles and Michael Karr all won matches at Nos. 3, 4 and 6 singles to seal the victory for the Dawgs.

Women’s Lacrosse vs UIndy
The women’s lacrosse team hosted an intercity exhibition matchup against the University of Indianapolis. Their season opener will be on Feb. 12 at Kent State.

The women’s basketball team fell to Seton Hall 72-56 at Hinkle in a rather competitive matchup. Butler led 42-41 in the third quarter, and only trailed 55-48 by the end of the third quarter. However, Seton Hall outscored Butler 17-8 in the fourth, allowing them to pull away and get the win.

Tenley Dowell led the way for Butler with a career-high 17 points, while shooting 5-11 from the field and hitting three 3-pointers. Andra Espinoza-Hunter led Seton Hall in scoring with 21 and the Pirates had five different players score in double figures.

The Butler men’s tennis team fell in an intercity matchup to the University of Indianapolis 1-6.

The Bulldogs picked up the doubles point with wins by the duo of Thomas Brennan and Alvaro Huete Vadillo in the No.1 spot, and Zach Trimpe and Patrick Joss at No. 3 doubles.

Brennan took a set from UIndy’s Tom Zeuch, but lost in a decision, 6-2.

The men’s basketball team — yet again — fell 52-54 on the road in Omaha against Creighton. The Bulldogs got a stop against Creighotn in the closing minute but couldn’t secure the rebound, allowing for Creighton to take a 54-52 lead in the final seconds.

Jayden Talyor led the way for the Dawgs with 13 points, followed by Bo Hodges who notched 10 points and nine rebounds. Arthur Kaluma and Ryan Hawkins stole the show for the Bluejays with 16 and 15 points, respectively.