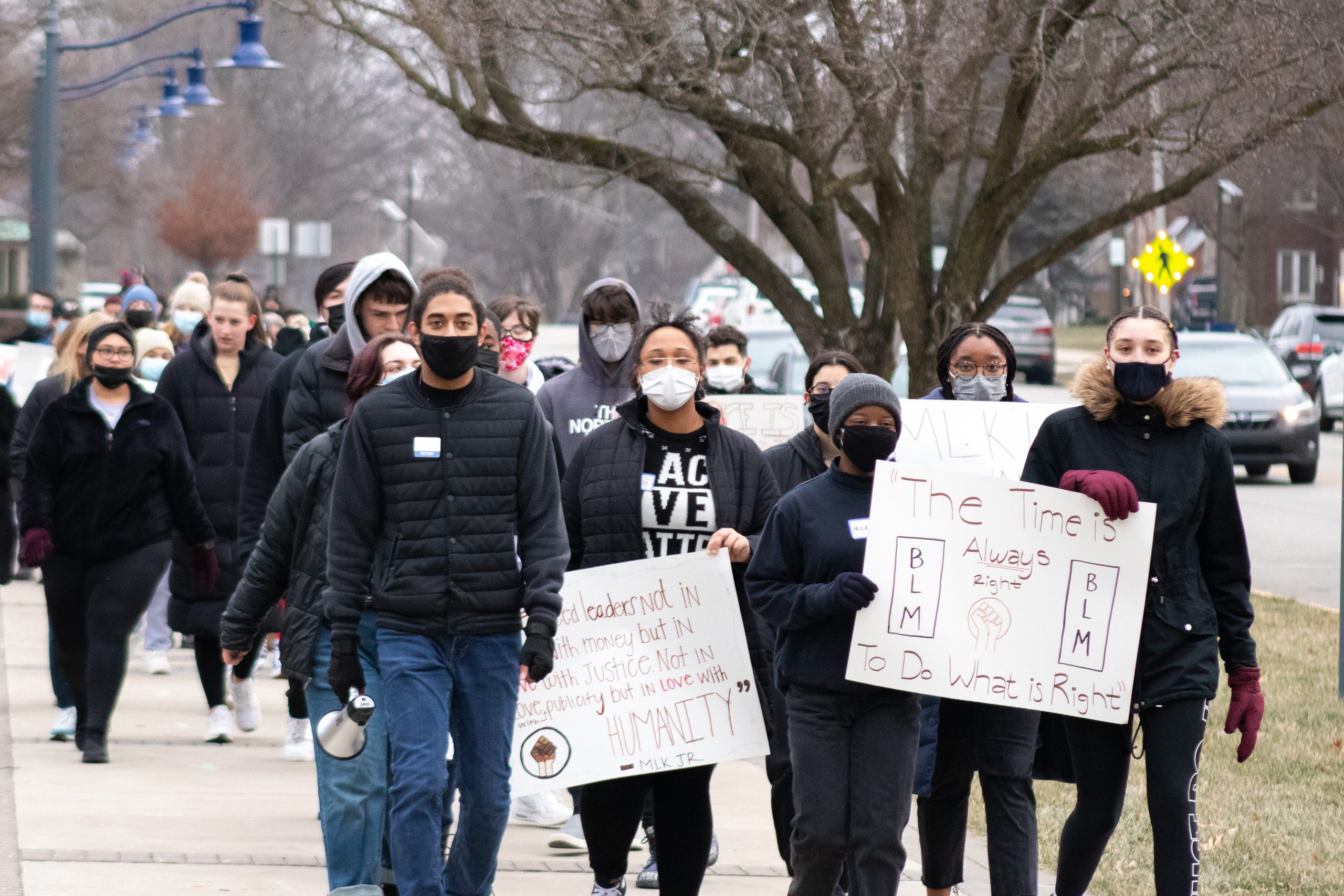 On Monday, Jan. 17, student-led campus movement Bust the B.U.B.B.L.E. — shortened as BTB — held its seventh annual MLK Love Walk after a year-long hiatus. Originally existing as a student collective for Black justice at Butler University, the group has grown in the past seven years and has more plans to come.

According to the Bust the B.U.B.B.L.E. Instagram account, the group is a “student-led campus movement at Butler University that works to promote Black and Brown student perspectives through action-oriented activism while breaking down the barriers that hinder those perspectives.”

Inspired by the police killings of Black men, Bust the B.U.B.B.L.E. formed in 2015 as a split from the long-standing Black Student Union student organization.

Aisha Bah, 2021 Butler alumna and former BTB director of communications, joined the movement her sophomore year. She got involved via her mentor who was one of the original co-founders.

“[Bust the B.U.B.B.L.E.] was more like a unit of Black students who really just wanted to make change on campus and see better opportunities and better treatment for Black students — and students of color really — on Butler’s campus,” Bah said. “The Black students that started it, they saw a vision for Butler, they wanted change, specific change … And they just kept fighting for that change throughout my four years at Butler, and [the fight] continued on even after they left.”

“B.U.B.B.L.E.” originally stood for “Believe / Understand the Butler Bubble Limits Everyone.” Ja’Sia Ward, junior biology major and initiatives organizer of BTB, explained how the meaning of the “bubble” has evolved.

“The ‘bubble’ is something that is keeping [students of color] in, something that confines us and does not let us succeed or prosper,” Ward said. “So our mission is to bust the bubble and fight back on — push back, at least — on those things that are trying to confine us and prevent us from prospering.”

In comparison to other Black or racial justice-centered groups on campus such as Black Student Union and Diversity Program Council, Bust the B.U.B.B.L.E. is explicitly advocacy-focused and action-oriented. Paul Ford, sophomore business major and the movement’s current lead organizer, hopes for the group to fill that activism niche in the Butler community.

“A lot of entities on campus engage in programming, and because of that, we try to expand on the initiatives that these entities kind of engage in,” Ford said. “We kind of see ourselves as more of a task force instead of necessarily just like a group with a membership … While other entities on campus can focus on being a community [for Black and Brown students], we can work on fighting for those communities.”

In addition, BTB is not officially affiliated with the university. While this restricts access to resources such as funding and Butler branding that official student organizations are allowed, it also safeguards the movement against censorship.

Through the years, Ward said the group has experienced “ups and downs,” and it was inactive through the 2020-21 school year, in part because of the COVID-19 pandemic.

On Martin Luther King Jr. Day on Jan. 17, Bust the B.U.B.B.L.E. emerged from its hiatus with the seventh annual MLK Love Walk, which it has hosted every year since its founding — with the exception of the previous school year due to COVID-19 and internal structure changes. This year, the Hub for Black Affairs and Community Engagement, the Desmond Tutu Peace Lab and the Diversity Program Council co-sponsored the event.

From 3 to 4 p.m., attendees made posters in the Efroymson Diversity Center sporting messages of racial justice. The walk itself started at 4 p.m. outside of Atherton Union, beginning with an introduction by Bust the B.U.B.B.L.E ‘s organizers and a brief speech by Ford. Attendees then made a walk around Butler’s campus with posters in hand. Recordings of MLK Jr.’s speeches played during the walk.

Martine Cardichon, sophomore electrical engineering and music double major, attended the event. She was impressed with the turnout and the outreach BTB was able to accomplish.

“It’s nice seeing a lot of people that aren’t in the [Diversity Center often] coming to this event,” Cardichon said. “Turnout was — for my expectations — way beyond my expectation. I didn’t really count, but I would say at least a good 100 people, maybe more, [came to the event].”

“It was nice to see that sense of community on campus and coming together for unity, and I think that MLK would’ve — that’s exactly what he wanted,” Brown said.

Austin also believes that the event served as an excellent comeback for the group.

“Especially for Bust the B.U.B.B.L.E., I feel like this is a really good push for us,” Austin said. “We now feel like we really can start doing things, and we have support around campus and the community, and that’s great.”

While the event commemorated the legacy of Martin Luther King Jr. and his Black activism Ford said, the event served a greater purpose in building solidarity.

“There are a lot of people who say that they don’t feel like the Black and Brown communities are necessarily unified on campus,” Ford said. “So [via] the MLK Love Walk … we’re also bringing ourselves together so that we can recognize our power and the change that we can make on campus.”

In the past, Bust the B.U.B.B.L.E. has collaborated with and worked to empower students throughout Indianapolis: at Butler, other universities and youth at the MLK Center. The movement has also advised the Butler administration, including in 2017 demanding the creation of the Hub for Black Affairs — which ultimately came to fruition in the fall 2020 semester.

Beyond the MLK Love Walk, Bust the B.U.B.B.L.E. aims to focus this semester on educating students on the power of activism and developing racial collective consciousness — the concept in which individuals feel connected to a greater group via shared values and solidarity. In regards to collective consciousness, Ford believes it is integral to beginning the journey of activism.

“[Black activist] Assata Shakur once said that ‘The less that you think about your oppression, the more tolerance you have for it, and after a while, you just think it’s the normal thing. So to become free, you have to be aware that you’re a slave,’” Ford said. “And so making sure that students of color on this campus understand and know the barriers that hinder them, as well as fighting against them.”

Part of that plan in creating collective consciousness includes revamping and modernizing BTB’s Double Consciousness blog. Founded during the early days of BTB, it takes its namesake from the concept of “double consciousness” in “The Souls of Black Folk” by Black activist W.E.B. Du Bois, who serves as a major inspiration for BTB.

“Double consciousness” describes the condition in which Black Americans and other marginalized groups experience life: both as their marginalized group and as an American oppressed in a society dominated by whiteness or other privileged class.

“We want to adjust [the blog] in a way to where students don’t necessarily have to come to us, but we’re coming to them to where double consciousness can meet them where they’re at because that could be another barrier that keeps them from engaging with it,” Ford said.

As a part of the solidarity in collective consciousness, Bust the B.U.B.B.L.E. — which originated as a Black-focused movement and draws its roots from Black activism — has since expanded to include all students of color in the shared unity of the collective white against white supremacy.

What the past gave and what the future holds

Since its creation, Bust the B.U.B.B.L.E. has engaged in discussions with Butler administration in ways to better the experiences of Black and Brown students: with the aim that future students would not have to endure what they have endured. Bah said when she was a student, she felt administration was very willing to engage in these conversations.

However, this did not necessarily translate into strong initiative or willingness to take real action.

“[Butler says] a lot about diversity, equity, inclusion being one of the founding themes for Butler as a university,” Bah said. “Interestingly enough, I don’t think those themes have really carried the same amount of significance that they should have carried from the outset through Butler’s history … It’s not at the fault of anyone in particular, one specific person. It’s more like systems and structures in place [making it] hard to really talk about or even kind of point out physically, unless you do sit down in spaces … and try to weed them out and figure out what is it exactly that makes our experiences different than our white peers.”

Ward hopes that all students in the Butler community will not only engage in what Bust the B.U.B.B.L.E. has to say but also to actively work to “bust the bubble” in their own lives — regardless of their affiliation with the movement.

“Don’t settle anymore,” Ward said. “You can always step up and say something … I think that a lot of times, a lot of Butler students kind of turn a blind eye. Look at where we are, you know. You go a couple blocks down the street, and Butler students are scared to go to these places … I feel like a lot of the time, they can see it, but they don’t acknowledge it.”

For Cardichon, she is hopeful that Bust the B.U.B.B.L.E. will serve as one of the catalysts to bring awareness to the everyday trauma that students of color experience that others have the privilege to ignore.

“A lot of the things that our communities go through are traumatizing, but they have to be said in order to bring awareness so that they can stop,” Cardichon said. “So it’s uncomfortable for us, but we have to talk about it, and hopefully those communities that don’t really experience what we experience or to the extent that we experience them can learn and understand in order to make the world a better place.”

One day in the far future, if Bust the B.U.B.B.L.E. feels that the collective has fulfilled its mission, Bah said she would feel at ease if the movement dissolved with the natural flow of society.

But that day has yet to come, and Bust the B.U.B.B.L.E. will power on.