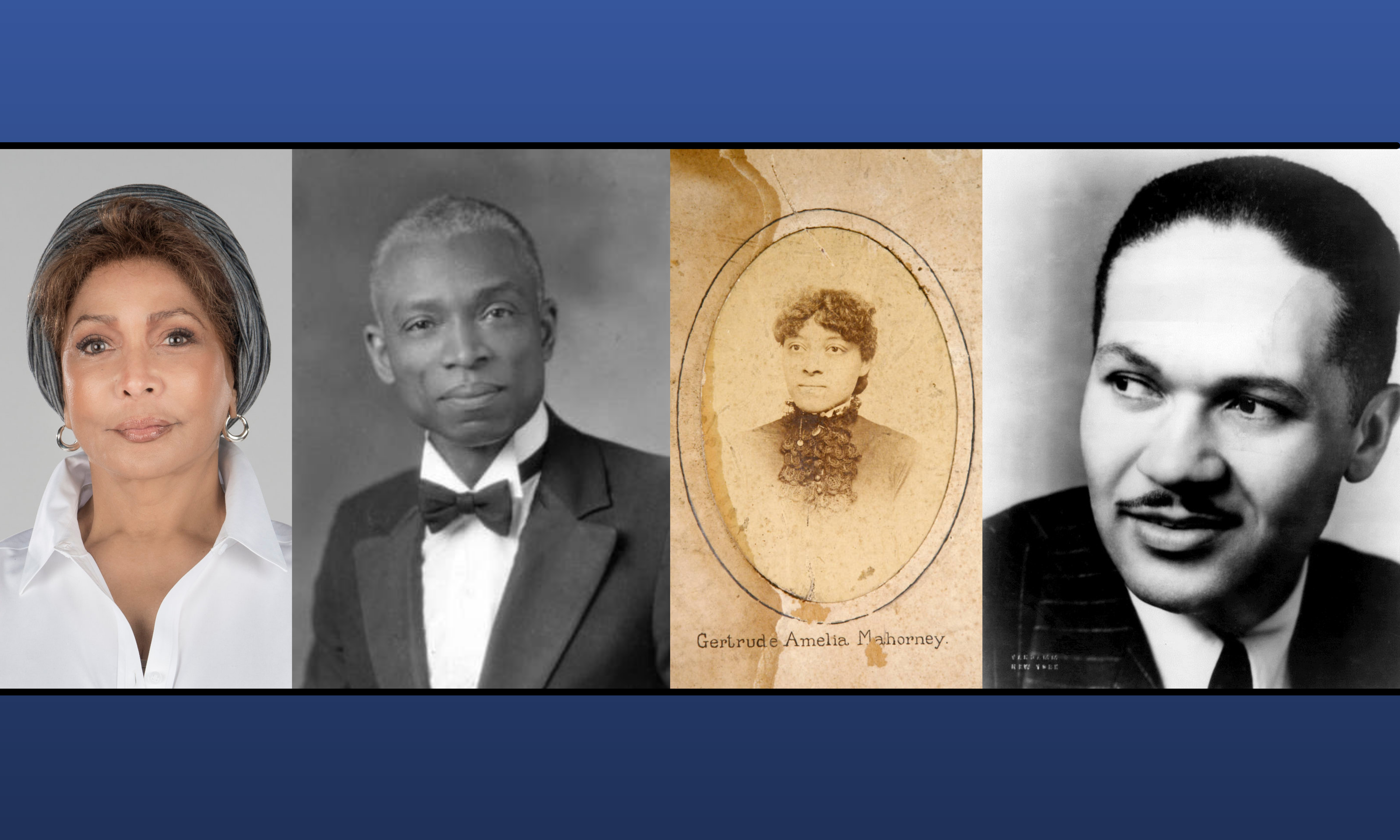 Over the years, colleges and universities in the United States have been known for highlighting the achievements and legacies of white individuals, often leaving out the important stories of Black Americans. To help combat this issue, President Gerald Ford decreed Black History Month a national observance in 1976.

Since then, the month of February has been a time where Americans can celebrate and reflect on the Black individuals and organizations that have made our country better.

It is important to recognize the profound contributions of all Black Americans, and Butler University students do not have to look far to find inspiring stories. There have been numerous Black alumni who have gone on to do incredible work in the fields of journalism, law, theater, civil rights and more.

Inspired by those who came before them, Butler also has many current Black students who are looking to make a difference on campus and in their communities.

Here are four Black Butler alumni and four current students you should know.

Gertrude Amelia Mahorney is the first documented African American woman to graduate from any Indiana college or university.

Mahorney graduated from Butler with a bachelor’s degree in 1887 and was awarded a master’s degree in 1889. She spent many years as a public school teacher in the Indianapolis Public Schools. Mahorney was fluent in German, so she translated stories that appeared in the local newspaper.

While the public record does not have information on Mahorney post-1929, Butler celebrated her legacy during Founder’s Week in 2016 when they displayed her restored graduation photo.

Todd Duncan graduated from Butler in 1925. He then went on to receive a master’s degree from Columbia University.

Duncan was a member of the music faculty at Howard University. The Washington Post described him as “an important force in the desegregation of American opera.”

Arguably, his most well-known role was as the first Porgy in “Porgy and Bess.” George Gershwin interviewed over 100 Black singers before offering Duncan the role.

In addition to being a respected singer and teacher, Duncan is known for his role in demanding equal rights for people of all races.

When “Porgy and Bess” performed at the National Theater in Washington D.C., Duncan refused to perform unless seating was desegregated. Management tried to compromise, but Duncan stood his ground. Eventually, management agreed to integrate seating for the performance.

Janet Langhart Cohen grew up in a segregated housing project in Indianapolis. She attended Butler from 1960 to 1962.

Her first role in the public eye was as a model for the Ebony Fashion Fair. She then moved to Chicago, where she met Martin Luther King Jr. On her website, she says, “I’m still learning from Martin to this day. He continues to enlighten, to teach.”

That was only the beginning. Cohen is a respected journalist, author, playwright and social activist. Some of her broadcasting roles include hosting “Good Morning,” later called “Good Day,” a 90-minute show in Boston. When the program went national, she was the first Black host of a nationally-syndicated program.

Cohen has worked on a variety of programs for ABC, NBC, Entertainment Tonight, BET and the Armed Forces Network. She also wrote for the Boston Herald. As a journalist, she interviewed prominent figures like Rosa Parks, Bill Clinton, Jimmy Carter, Oprah Winfrey and Margaret Thatcher.

In addition to her work as a journalist, Cohen wrote a one-act play titled “Anne & Emmett,” which centers around a fictional conversation between Anne Frank and Emmett Till. Both teens were killed by a society that failed to accept them. Joe Biden, who at the time the Vice President of the United States, was in the audience when the play debuted in Washington D.C.

Cohen is also an accomplished author. Her memoir, “From Rage to Reason: My Life in Two Americas” discusses race in America based on her experiences.

Cohen continues to work on highlighting the issues of race and reconciliation in our country.

He was enrolled at Lincoln College, but his education was interrupted when he joined the U.S. Army. He fought in the Philippines from 1911 to 1914. After being honorably discharged, he went back to Lincoln College, where he met his wife, Pauline. Morton-Finney put on his uniform again during WWI, serving in the American Expeditionary Force in France.

Morton-Finney was a respected teacher, lawyer and civil rights activist. He spent 47 years as an Indianapolis Public School teacher and later as head of the foreign language department at Crispus Attucks High School. He taught his students about the importance of a quality education.

Morton-Finney practiced what he preached. He earned a total of 11 academic degrees, five of which were in law. His last degree was from Butler in 1965.

In 1972, Morton-Finney was admitted to practice before the U.S. Supreme Court. In 1991, he was inducted into the National Bar Association Hall of Fame before retiring in 1996 at the age of 107. He is believed to have been the oldest practicing attorney in the United States.

One of Morton-Finney’s most famous quotes was “I never stop studying. There’s always lots to learn. When you stop learning, that’s about the end of you.”

His legacy lives on in the Butler community through the Dr. John Morton-Finney Diversity Scholar Program. This scholarship is awarded to Butler students “who have taken a leadership role promoting diversity, equity, and inclusion in their schools or communities.”

These Butler alums paved the way for students, like the four featured below, to forge their own paths and make history.

Aisha Bah is a senior strategic communication and philosophy double major. During her time at Butler, Bah has been involved with numerous organizations within the university and the broader Indianapolis community.

Bah is a co-leader of Bust the B.U.B.B.L.E., a student-led initiative focused on promoting the perspectives of students of color at predominantly-white institutions, or PWI’s. Bust the B.U.B.B.L.E. is an independent organization and is therefore not sanctioned by Butler. The group does work in Butler’s surrounding communities and tries to focus on social justice initiatives that are important to its members.

On campus, Bah is a Writer’s Studio peer tutor, where she enjoys being able to connect with and assist her peers. She is also a Dr. John Morton-Finney scholar, which has been an influential part of her college experience.

“[The scholarship] introduced me to the Diversity Center and student leaders that were already making waves on campus, so I definitely cherished having the scholarship so early on in my college career,” Bah said.

Morton-Finney scholars are encouraged to address systemic issues through volunteerism and advocacy. Before the pandemic, Bah volunteered at food banks and food pantries across Indianapolis.

“We have such a serious food insecurity problem that doesn’t get a lot of attention in the media,” Bah said. “The fact that it’s not being reported on makes it harder for people to realize that this is a serious problem going on within their own communities. It’s not only a third-world problem. It’s happening across the street from you.”

After graduation, Bah hopes to take a gap year before attending law school. She wants to continue her work with public policy and teaching people about the liberation efforts going on around the country.

LaTrese Robinson, a senior international business major, is a part of several organizations on Butler’s campus. Currently, she serves as vice president of programming for the Black Student Union, senate appropriations commissioner for SGA and as an international diversity ambassador.

In her role as VP of programming for BSU, Robinson’s goal is to plan events that students want to attend and participate in. Some events are geared towards social interaction, while others are focused on educating people through real-world experiences rather than from a book.

Robinson is also a Morton-Finney scholar. She said that learning about Morton-Finney’s life and legacy has inspired her during her time at Butler.

“I got to learn more about him and the way that he just kept going,” Robinson said. “He kept learning. The learning process does not stop after we get our diplomas. You can continue to learn and help people even if you’re not around to see it.”

Melísenda Dixon, a sophomore management information systems major, is president of the Black Student Union and on the Dean’s Diversity, Equity and Inclusion Board for the Lacy School of Business. On the board, Dixon helps plan events aimed at recruiting a more diverse population to campus.

Dixon is another Morton-Finney scholar. She said that her cohort of scholars is like a family full of talented and respectful individuals.

“I think that being part of his scholarship has definitely shown me that leadership and diversity can be a wide range of things,” Dixon said. “When I got my scholarship, I thought of diversity as ethnic and racial diversity. I didn’t think about it as the LGBTQ community, people with disabilities and different things like that, and that’s definitely what it can mean.”

Dixon is planning on graduation in December 2021 at the age of 20. This summer, she will be working for a consulting firm in Seattle. Her goal is to one day work as a healthcare consultant selling equipment and other services to hospitals around the country.

Paul Ford is a first-year entrepreneurship and innovation major who is already making a name for himself on campus. He is a first-year chair for BSU, treasurer for the LGBTQ+ Alliance and a member of the SGA student senate.

Ford enjoys organizing and is particularly interested in the startup management industry. He said he believes that the strong alumni network at Butler, along with the legacy of those who came before him, will improve his chances of being successful in the future.

“I think it’s important for us to honor our heroes,” Ford said. “They inspire the next generation of leaders and it’s so important to have people like that to look up to. I can’t wait to see the people in this generation that turn out to be those types of leaders.”