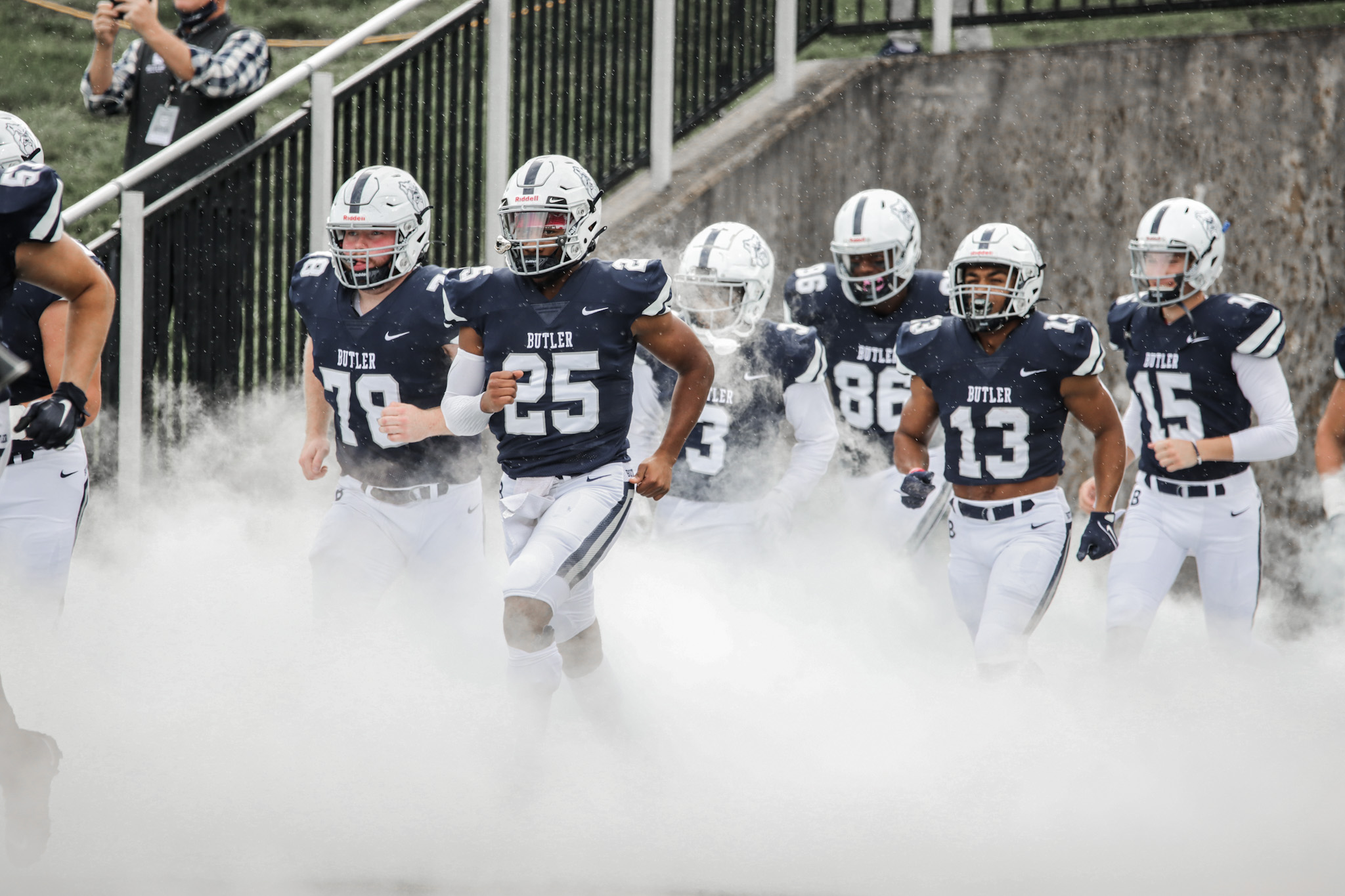 The Butler football team running out their tunnel and into the Sellick Bowl prior to their matchup against Davidson on Oct. 30. The program finished the 2021 season with a record of 3-8. Photo by Grace Denckhoff.

On Monday, Nov. 29, Butler football head coach Jeff Voris announced his resignation from the team after 16 seasons with the program.

In Voris’ resignation letter, he expresses his gratitude towards Butler.

“For 16 years I was blessed to be surrounded by a football staff of outstanding coaches, teachers and mentors,” Voris said in his letter. “Their work ethic and commitment to our players was exceptional, and I learned something every day being around them. Finally, and most importantly, the players. It has truly been an honor to have been your coach. Your investment and attitude on a daily basis were inspiring and what made coming to Hinkle every day so memorable and enjoyable.”

Redshirt junior defensive lineman Mike Butler reflected on his time in the program under Coach Voris and the chance he provided to hundreds of young men throughout his career.

“I can speak on behalf of all my teammates in congratulating Coach Voris on his illustrious career as the head coach of Butler football,” Butler said. “He gave me and many others the opportunity to live out our dream of playing Division I college football. He is one of the finest men to have ever coached this game.”

Defensive coordinator Joe Cheshire was named interim head coach as Butler begins their search for the new head coach. He has been a part of the program since 2004 and has held multiple roles such as assistant head coach and recruitment coordinator.

Cheshire was part of the Butler coaching staff during one of the best runs in Butler football history. In 2013, he helped guide the Bulldogs to a Pioneer Football League Championship while also appearing in their first NCAA Division I FCS Championship.

“I think having done a lot of those jobs, [it] helps you operationally know what everyone is going through,” Cheshire said. “When you delegate responsibilities you have an idea of the time commitment and what it takes and can always lend a hand or give advice.”

With his previous experience in different coaching positions, Cheshire is ready to take on this opportunity with an open mind and a new outlook.

“The unknown is a little bit scary, but I believe in this place and I love this university,” Cheshire said. “I believe in what this university stands for, and we have a lot of guys that care about football and are committed to turning our program around and making a difference.”

With the Bulldogs coming off of a 3-8 season with one conference win — Cheshire is ready to come in as interim head coach and show stability to the team.

“The biggest thing is to try and get some consistency and stability for the guys that we have in the program right now,” Cheshire said. “With the uncertainty and timing of everything, we don’t get to spend a lot of time with the guys with break coming up. But we are trying to show stability and that we are there for them and definitely have a plan moving forward.”

Even with the unknown of who is going to be named head coach, Cheshire is still ready to bring in some ideas of his own and do all he can during his time as interim head coach.

“As you progress through the years of coaching, you keep a book of ideas,” Cheshire said. “You see things done in certain places or you see people do it in a certain way that you always just want to put your individual stamp on it. There is definitely stuff I have strong beliefs in that I think could help the program and will implement them for sure.”

Redshirt junior defensive lineman Joe Marra is confident that the program is in great hands with Cheshire temporarily taking over.

“I know that program is still in great hands with coach Cheshire in charge for the time being,” Marra said. “He’s an all-around great coach and an even better person, he cares about his players and the program. I am excited to see what direction the program heads next.”

As Cheshire begins this new role, he is eager to get started and help the program grow both on and off the field — he wants to be a source of pride for the Butler community because of how much he loves the university.

“I’m very appreciative of this place and I love Butler,” Cheshire said. “We want to be a bright spot for the university and an example of what good we can do both on and off the field as a program. We are built on competition and paying it forward to the community and doing things the right way.”