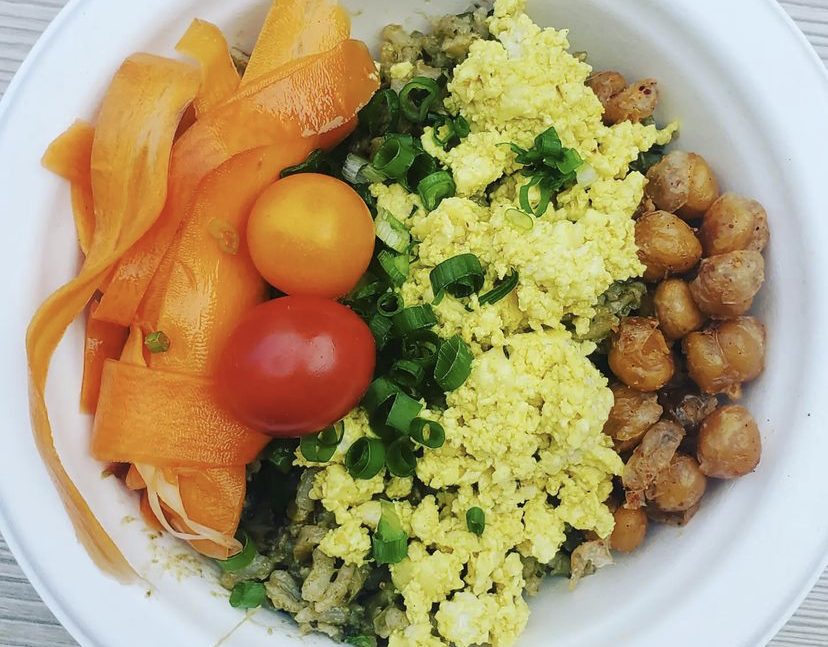 The Irvington garden beds are taking farm-to-table eating to a new level by serving produce grown outside the dorm. On Sept. 30, students ate a meal prepared with produce from the beds while sitting around them. The finished product, a vegan Buddha bowl, featuring carrots, sorrel and green onions grown in one of the three beds.

The beds, initially meant for flowers, were used to start growing vegetables and herbs three years ago. At the suggestion of Jane Gervasio, pharmacy practice department chair and Irvington faculty in residence, the beds now involve students in the process of growing fresh produce. Gervasio said she is excited that students can now play a bigger role in tending to the beds.

Grace Jackson, Center for Urban Ecology and Sustainability intern and senior political science major, received a grant through Bon Appétit to further develop the Irvington beds. Gervasio said that the grant has already been a huge help with tending to the plants.

“This year [Grace] got a grant through Bon Appétit,” Gervasio said. “That’s allowing [Grace] to purchase some equipment which will help them immensely… Last year we couldn’t even water. We were having to take water out in little buckets. Now we can hook up the hose, we can water and more students can get involved.”

Jackson organized the cooking demonstration with Bon Appétit outside of Irvington’s main entrance from start to finish. Jackson plans to continue with the cooking demonstrations as the year progresses. As a CUES intern, Jackson said her job is to introduce Irvington students to more sustainable practices and connect them with the garden beds by getting them involved in growing and tending to the plants. Jackson’s end goal is to create a club where Irvington students can sign up to take care of the beds themselves.

Jackson also said that she hopes to pay homage to indigenous people by growing plants native to Indiana in the beds. One plant Jackson is looking forward to growing in the beds is Goldenrod, which was once used as a treatment for bee stings.

“There’s a lot of ecological benefits to Indiana natives including pollination and soil retention,” Jackson said. “I think we as a society have a tendency to forget indigenous cultures, and they’re not taught that well in schools. One of the ways I feel like we can connect students to that is through planting natives in the beds.”

For now, however, the beds are growing carrots, green onions and a leafy green called sorrel.  In the cooking demonstration, campus executive chef, Chad Melinger, made a brown rice and tofu bowl with agrodolce carrots, sorrel infused rice and garnished with the green onions. The meal received high ratings from the students who attended.

“I was raised in a family that always had a garden in our backyard, and my grandparents have a farm just west of Indianapolis,” LaRoche said. “They’re really big into sustainability and Indiana based plants, so it’s really cool to see something similar here outside of my family.”

Gervasio and CUES faculty members are excited to get more students involved in growing their own food in the beds. Students interested in getting involved can find more information about CUES and Butler dining through the CUES and Bon Appétit Instagram pages.