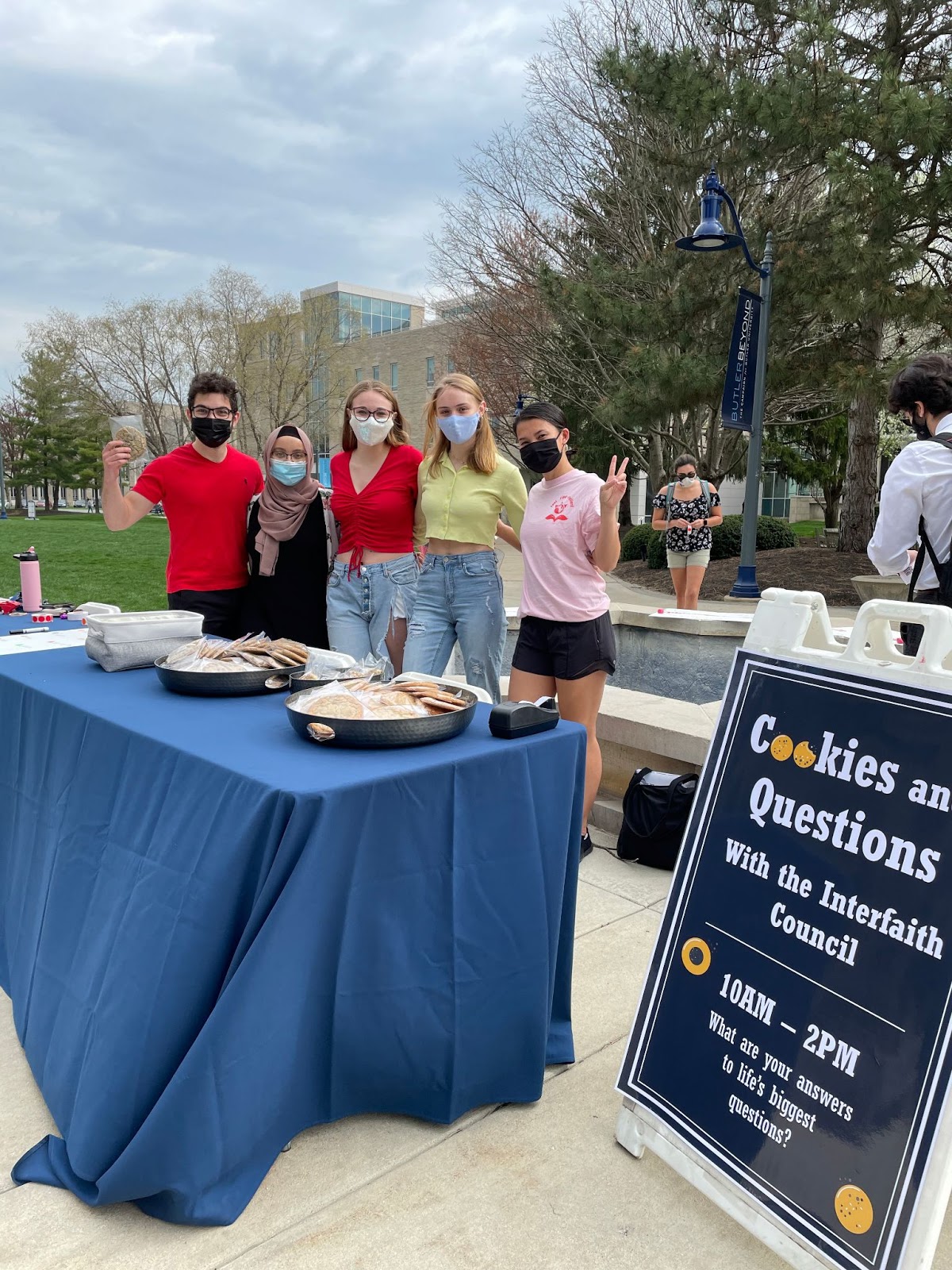 Members of the Interfaith Council pose for a photo at their Cookies and Questions event at star fountain. Photo by Janet Lovera.

A year in review

Like many organizations on campus, the Interfaith Council was impacted this year by COVID-19 guidelines and restrictions. In normal years, Interfaith Council meetings occurred in person and were widely centered around the tradition of eating together.

“Food is the social lubricant; it helps break barriers, get people connected,” Meyers said. “So [this year] food was more of an expression of gratitude than part of the conversation experience.”

While the Interfaith Council could not gather and eat together like normal years, students like Meet Patel, a sophomore health sciences major and interfaith intern at the CFV, found creative ways to think outside of the boxed lunch.

As an interfaith intern, Patel had two projects over the 2020-21 school year. During the fall semester, he worked with the Center for Interfaith Cooperation — an Indianapolis non-profit organization — to encourage interfaith dialogues through their online platform. In this program, participants get paired with another person and have virtual religious-based conversations.

“This semester, my focus has been on the spring faith celebrations or traditions for different faith groups like Hindus, for Holi, Passover for Jews, Ramadan for Muslims and Easter for Christians, of course,” Patel said. “The idea behind that is to set up an opportunity for Butler students to go to Butler dining and have some of the foods that are traditional to some of these traditions. We did them for Passover, Holi and Easter already, and we’re doing that for Ramadan on April 19.”

After the postponement of the Angela Davis “Joint Struggle and Collective Liberation” event, Butler’s interfaith community provided spaces for conversations concerning the postponement and its implications.

“We talked at length about the situation with Angela Davis and that event two Tuesdays ago,” Meyers said. “It was very interesting and very enlightening since we have students that are pretty involved with SGA, we have students that are aware of the complexity of the issues related to free speech…so while that conversation wasn’t something that could permeate to the whole campus, it was really for students who had been pretty involved in, and clearly said that they cared about religious diversity on campus. It was a very interesting and helpful, and I think for those in it, a very productive, thoughtful and thought-provoking conversation. What I think is harder is how to use the interfaith communities in those moments for the wider campus.”

While these conversations were provided for members of the Interfaith Council, the Council’s goals for next year include integrating larger campus discussions regarding religious tolerance and unity and collaborating with Diversity, Equity and Inclusion organizations.

Patel also mentioned in an email that he, Hannah Beaven who is an interfaith intern for the CFV and chair of the Interfaith Council, James Ewing who is a former Center for Interfaith Cooperation intern and Daniel Meyers wrote an article titled “Better Together: An Exploration of Interfaith Ideologies” that will be published in Butler’s BU Well Journal on April 23.

Thanks to vaccinations and the prospect of a normal next year, the Interfaith Council has many plans in the works. From fostering further religious diversity questions to hosting events that celebrate interfaith, the council is hopeful for their increased visibility on campus next year.

“We’re not the only players [in the game of religious diversity,]” Meyers said. “There’s the Muslim Studies Endownment, the religion faculty, also… the Peace Lab, obviously the Diversity, Equity and Inclusion arm, DEIB board; there are different pieces of how religious diversity gets expressed, and we’re obviously a big part of that, but not the only place where that comes from. I’m also interested in partnering with them in new ways next year too because I think some of those partnerships have just had to wait.”

Meyers is also in hope of hosting a semi-series for the CFV, called the Seminar for Religion and Global Affairs, which features speakers on global topics.

“[The series] relates to multiple religions and secular views, but that had to be, ‘put on hiatus this year’ but it will be coming back next year with themes around religion and family,” Meyers said.

Hannah Beaven said that the application to be a part of the Interfaith Council will be released at the beginning of next semester and that other interfaith initiatives like Brave Dialogues and the film and speaker series will occur as well. She also said that new events organized by next year’s council “happen every year” and will be announced closer to the events’ dates.

Beaven also said that while Interfaith Council is a great option for students passionate about religious diversity and unity, discussing religion does not have to be a formal event; conversations concerning religion can be had regularly and help foster a more tolerant campus.

“Organizations like the Interfaith Council are awesome in what they do and the conversations that they facilitate, but you don’t have to be a part of the Interfaith Council to have meaningful interfaith conversations,” Beaven said. “It can be as simple as you’re eating dinner with a roommate or friend and somehow the topic of religious beliefs come up; whether you have a religious or secular identity, there’s always relationship-building that can occur whenever you can share those beliefs and better understand each other and then being able to better understand each other leads to a more inclusive campus community where people feel like they belong.”

Students interested in joining the Interfaith Council can sign up for the Center of Faith and Vocation’s newsletter to stay up to date with all things interfaith.