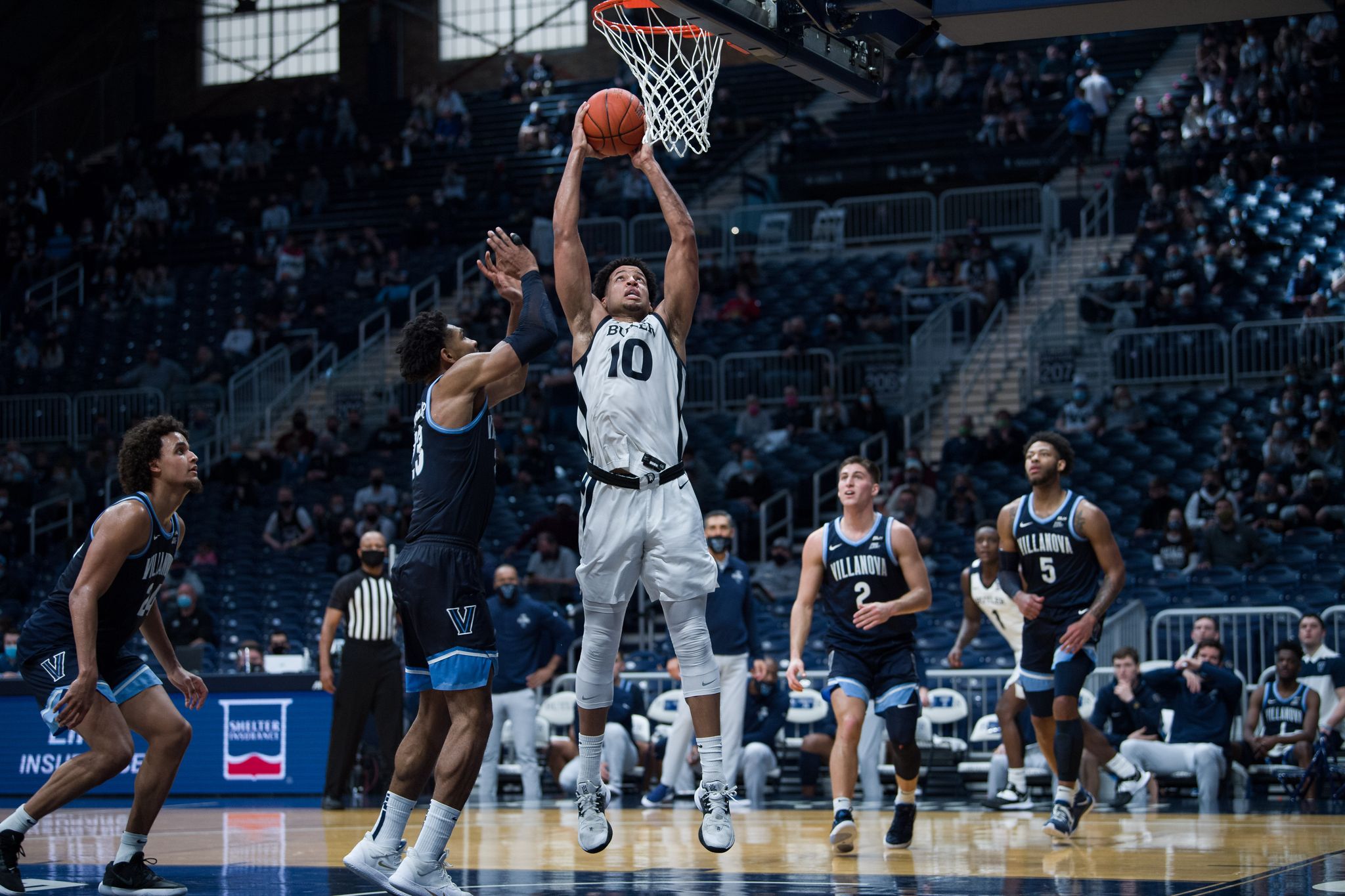 Bryce Nze rises for a dunk in the Bulldogs’ win over Villanova last week. Butler goes for its third-straight win to end the regular season at No. 14 Creighton. Photo by Zach Bolinger.

The Butler men’s basketball team upset No. 8 Villanova last week, 73-61. Now, the Bulldogs head west to face No. 14 Creighton to finish the regular season. Butler would win three consecutive games for the first time this season with a victory over the Bluejays on Saturday.

As it stands currently, the Bulldogs are 8-11 in Big East play, good for ninth in the league. If the Big East Tournament started today, Butler would face 8-seed Providence in the first round before a potential rematch with No. 10 Villanova.

On Thursday, Butler Athletics announced Aaron Thompson would miss the remainder of the season with a shoulder injury. The senior guard will require offseason surgery and has possibly played his final game in a Butler uniform. Here’s what you need to know as the red-hot Bulldogs head to Omaha to try to get a road win to finish out the regular season.

1. While Butler is under-manned, Creighton is under-staffed

Butler will be missing their senior leader and floor general Aaron Thompson with a shoulder injury on Saturday, but Creighton will be facing under-staffed issues of their own. On Thursday, Creighton University announced the indefinite suspension of 11-year head coach Greg McDermott for use of a racially insensitive comment after the Bluejays’ loss at Xavier on Feb. 27. While McDermott has apologized for the comment, Creighton will be without its head coach for at least the rest of the regular season.

On Wednesday, McDermott coached the Bluejays in a 72-60 loss at No. 10 Villanova. In a year with so many twists and turns, it can be hard to predict how a team will react to losing their head coach for a game. Will the team be lost without its lead strategist or will they be motivated to quiet the noise outside of the program right now?

For the Bulldogs, the gameplan will be to keep doing what they’ve been doing. After two wins over NCAA Tournament-caliber teams in Seton Hall and Villanova, Butler will look to rekindle some of that success away from Hinkle Fieldhouse. In 10 games away from home, the Bulldogs have just one win, a 67-53 win over Big East basement-dweller DePaul.

While it is too late for Butler to add quality wins to its resume for an at-large bid to the NCAA Tournament, a strong finish of the regular season and Big East Tournament could do wonders for this team’s development heading into next season.

2. Marcus Zegarowski makes his season debut against the Bulldogs

Yes, the Bulldogs did upset then-No. 8 Creighton, 70-66, in overtime on Jan. 16 at Hinkle. However, that win does come with a caveat. The Bluejays were without their leading scorer and likely All-Big East First Team selection in Marcus Zegarowski. The junior guard is averaging 14.7 points, 4.6 assists, 3.8 rebounds and 1.3 steals this season.

In last season’s drubbing at home against Butler, Zegarowski scored 25 points on a perfect 7-for-7 from 3-point range. Zegarowski’s ability to stretch the floor was dearly missed in Creighton’s loss at Hinkle Fieldhouse in January, as the Bluejays shot just 6-for-23 from deep. Recently, though, Zegarowski has not been on his A-game.

The junior guard has actually experienced a dip in production, from 16 points per game last year to 14 this season. The drop off has largely stemmed from a dip in efficiency, as Zegarowski has made half of his shot attempts or less in seven of his last eight games. There’s no doubt Zegarowski will get his points, but if Butler can get him to score 14 points on 15 shots instead of eight, it will drastically improve the Bulldogs’ chances of pulling off the upset.

3. Bluejays looking to right the ship before an NCAA Tournament run

Having lost their last two games and going through the storm that comes with the McDermott situation, Creighton has to be looking to get right before the Big East Tournament and a potential run to multiple weekends in March Madness. As of now, the Bluejays are projected around a 5-seed in the NCAA Tournament. A loss to Butler would not be a good look on the resume. However, with a win, Creighton could enter Madison Square Garden facing these same Bulldogs before a chance to pick up another win over a Tournament-quality win in the Big East semifinals against either UConn or Seton Hall.

After losing out on the NCAA Tournament last season as a projected 2-seed in the Big Dance, Creighton will surely be hungry to make a run at their first Final Four in school history. Between Zegarowski, Denzel Mahoney, Mitch Ballock and Christian Bishop, they have the talent to make such a run.

But the Bluejays should be weary of expecting Butler to roll over. The Bulldogs have nothing to lose at this point of the season and are playing with more confidence than they have at any point this season. If Butler can limit their turnovers and keep Creighton out of transition, the Bulldogs are a real threat to come out of Omaha with a win, a place they haven’t won since February of 2015.