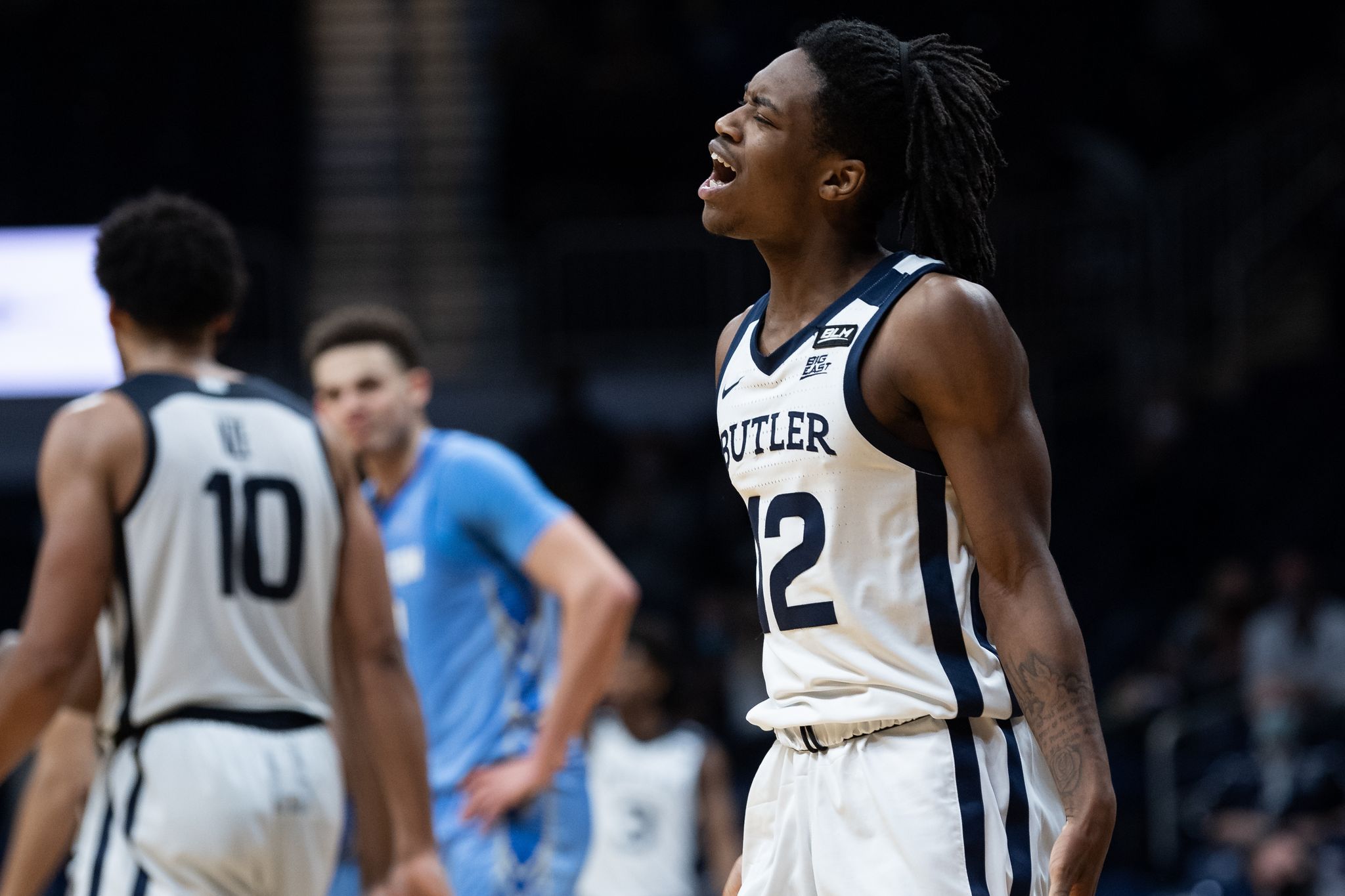 Myles Tate celebrates after making a play in a game earlier this season. Tate recorded 10 points and four assists in Butler’s 67-53 win at DePaul on Jan. 19. Photo by Zach Bolinger.

For the first time this season, the Butler men’s basketball team earned its first back-to-back victory and the first win away from Hinkle Fieldhouse. The Bulldogs defeated DePaul, 67-53, on Jan. 19 behind a season-high 21 points from Jair Bolden and another strong defensive performance against a high-tempo team. Let’s go beyond the box score in Butler’s fourth Big East win on the season.

1. Energy and attitude carried the Bulldogs

Butler took their first double-digit lead at 20-10 with over 10 minutes remaining in the first half. The Bulldogs never relinquished that double-digit cushion throughout the remaining 30 minutes of the game, in what was one of their most complete performances of the season. Although DePaul made a run in the second half off of some sloppy play from the Bulldogs, Aaron Thompson and company steadied the ship and walked out with a road Big East win. What was the difference tonight? According to head coach LaVall Jordan, the Bulldogs brought an intense energy and attitude to Wintrust Arena. While there’s nothing statistical about it, the bench was much more animated than in previous games — helped by the 20-plus points advantages in just the first half.

However, that energy spilled over to the floor and it showed in the way some Butler players performed. The prime example is Bryce Golden. The returning starter from last year’s NCAA Tournament-bound team was benched in favor of freshman Myles Wilmoth in the most crucial moments of the Creighton game on Jan. 16. Instead of hanging his head or requesting to transfer, Golden stepped up and scored the first five Butler points on the night, including his first 3-pointer of the season. Golden finished with 10 points and five rebounds, missing just one shot on the night.

2. Butler’s defense is getting better and better

Among all of the aspects of the team affected by the COVID-19 pause, the most concerning for Butler was their lackluster defense upon returning. The Bulldogs allowed their opponent to shoot 50 percent from the field in four of five games in December, ranking near the bottom of the country in field goal and 3-point percentage allowed. With high-tempo teams like Georgetown, St. John’s, Creighton and DePaul on the docket for January, it seemed that the bleeding was going to get worse before it got better. However, that has not nearly been the case in the Bulldogs’ most recent two games.

Butler has forced its opponent to play at their pace and score on a stingy, set halfcourt defense.  Creighton tied their season-low in points despite playing five extra minutes and holding the Blue Demons to under 60 points. Butler’s defense was so overpowering against DePaul that Jair Bolden was outscoring the entire opponents’ roster all the way through the final media timeout of the first half. The Bulldogs forced the Blue Demons’ top three leading scorers — Charlie Moore, Javon Freeman-Liberty and Romeo Weems — to a combined 5-of-26 shooting from the field for a combined 15 points, far below their trio’s 38-point average on the season.

Butler has now cracked the top-60 in the country defensively per KenPom. Coach Jordan attributed the improved defensive effort to a growing chemistry among the team. With only eight healthy scholarship players available, the group is certainly to get familiar playing with each other, but these past few games are welcome proof for Butler fans. This young roster is beginning to buy into what it means to play Butler basketball and the philosophies Jordan and staff want to establish. While the Bulldogs made double-digit 3-pointers, something that will not happen most night, the defensive keys and intensity can transfer from game to game.

3. A word on Jair Bolden

Jair Bolden has been looked over in his short time at Butler. He hasn’t scored with the consistency that Thompson and the freshmen guards have, and he doesn’t have the years of eligibility remaining to make a Bulldog fan salivate about the future. Nevertheless, Bolden is proving his worth to this team night in and night out.

Bolden knocked down five 3-pointers against DePaul, the third time he connected on five or more 3-pointers this season. In one of the more unknown stats about the Butler team this year, Bolden leads the conference in 3-pointers made this season. In addition to the quantity of perimeter shots, Bolden has now set the offensive tone early in three road games.

Against Villanova, St. John’s and now DePaul, Bolden got hot — quickly. For a team that ranks near the bottom of the Big East in points per game, Bolden is the lightning in a bottle that can strike at any moment to vanquish a deficit or push a lead out of reach. His effectiveness has also undoubtedly benefited the spacing of a Butler offense. As Butler quietly sneaks closer to .500 in league play and enters conversation for postseason play — NCAA Tournament or otherwise — look for Bolden to be Jordan’s X-factor.

Those who follow Butler basketball were wowed in the early going of the individual performances early on this season. Thompson’s career-high versus Western Michigan, the freshmen guards playing above expectations or Wilmoth earning big-time minutes down the stretch. However, in these last two games, Butler has looked more and more like a cohesive team every time they step out onto the floor.

Now, for a mid-season glance at the rest of the conference. In the last week, Butler upset Creighton, St. John’s beat No. 23 UConn in Storrs and more games were seemingly postponed than played on-schedule. The familiar faces are at the top and the bottom, but this week reminded Big East fans that any team can win in any given game.