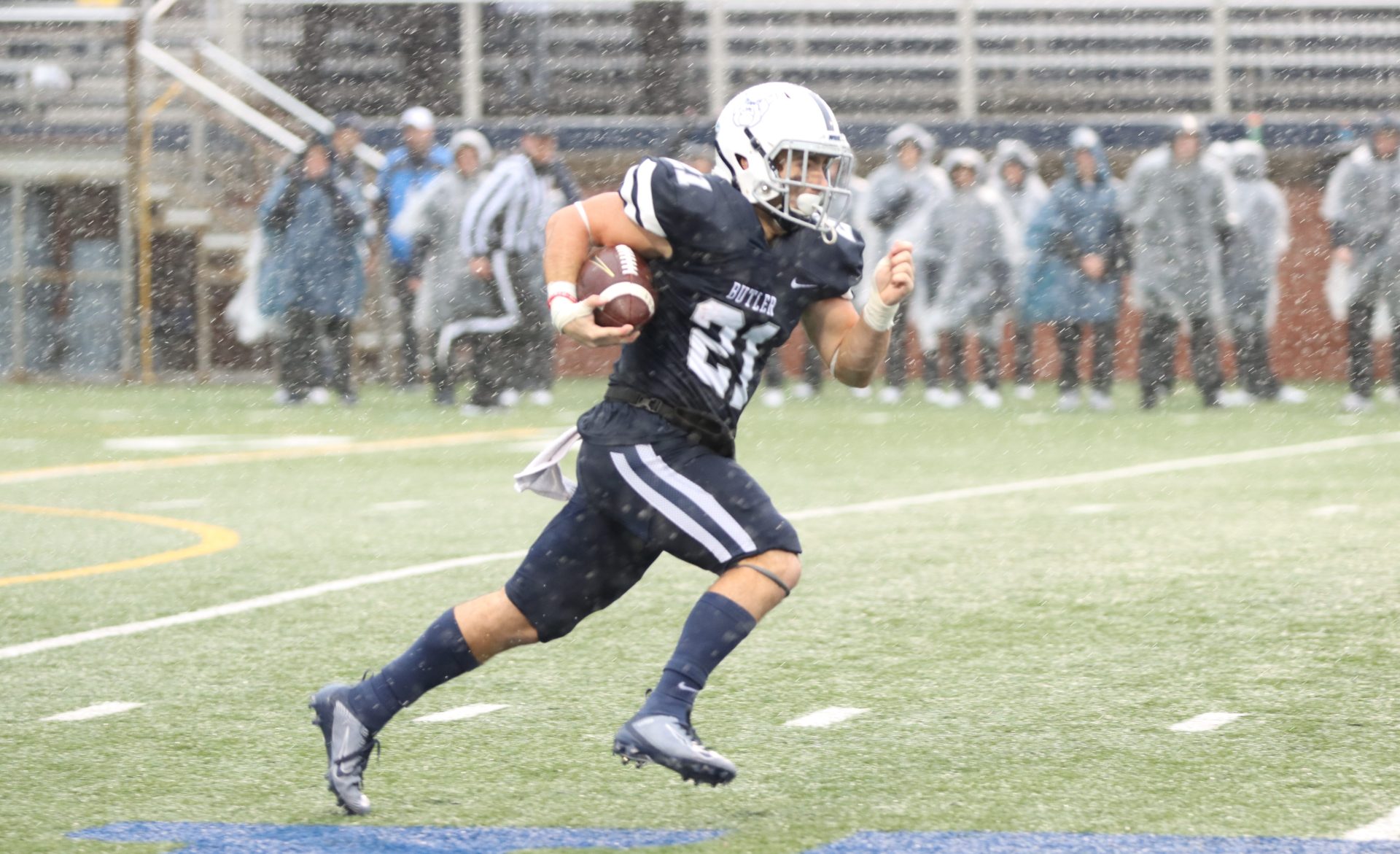 AJ Deinhart carries the ball during a Butler football game last season. The team is scheduled to begin their modified spring 2021 schedule on March 13 versus Morehead State. Collegian file photo.

The postponement of fall Big East sports to the spring left many teams in limbo — until now. With the potential of nearly every sport playing this spring, the sports scene is sure to be remarkably busy. Here is a guide of what to expect and which games to be on the lookout for.

As the spring semester has officially kicked off, some Butler teams are already in action. Both the Butler women’s and men’s basketball teams are in full swing, with home games on the schedule all the way through Feb. 27 and 28, respectively. Both teams will be playing multiple crucial conference games in this timeframe, and a limited number of fans are allowed into Hinkle Fieldhouse to watch them play.

In February, several more Butler teams are slated to begin their respective seasons. The men’s soccer team, the men’s and women’s cross country teams and women’s tennis team all begin their season in the first week of February. The men’s soccer team kicks off their season on Feb. 5 with a home game versus SIUE. The following day, on Feb. 6, the men’s and women’s cross country teams will travel to Lipscomb for their first meet of the season. The women’s tennis team also begins play on the 6th, with a home matchup versus Valparaiso.

Later in February, the softball team is expected to begin their season on Feb. 12. The team will travel to Cedar Falls, Iowa, for a doubleheader against Omaha and Northern Iowa. The team will remain in Cedar Falls for the 13th and 14th, and will play three additional games.

The men’s tennis team opens their season on Feb. 14, and will travel the short distance to the University of Indianapolis to face off against the Greyhounds.

Moving into March, the women’s lacrosse team will be the first to start play in the month, launching their 2021 campaign with a home matchup versus Robert Morris.

Later in the month, the football team will begin their modified spring slate, kicking off with a home game on March 13 versus Morehead State. At the moment, the Morehead State matchup is Butler’s only home game, and one of only four scheduled games this season. Their other two scheduled home games versus Dayton and Valparaiso have been canceled, and it is unclear whether new games will be scheduled in their place.

Some notable matchups in the month of February include the women’s basketball facing off against a nationally ranked UConn team in Hinkle on February 27. The following day, the men’s team will face off at home against Villanova in what is sure to be an interesting matchup. Both of these games will be the basketball teams’ final home games.

In addition to Butler football’s home game, the Sellick Bowl will be home to other notable games this spring. Both soccer teams will have numerous in-conference home matchups at the Sellick Bowl, including a doubleheader on March 13 and 14 against rival Xavier, a matchup likely circled on both teams’ calendars.