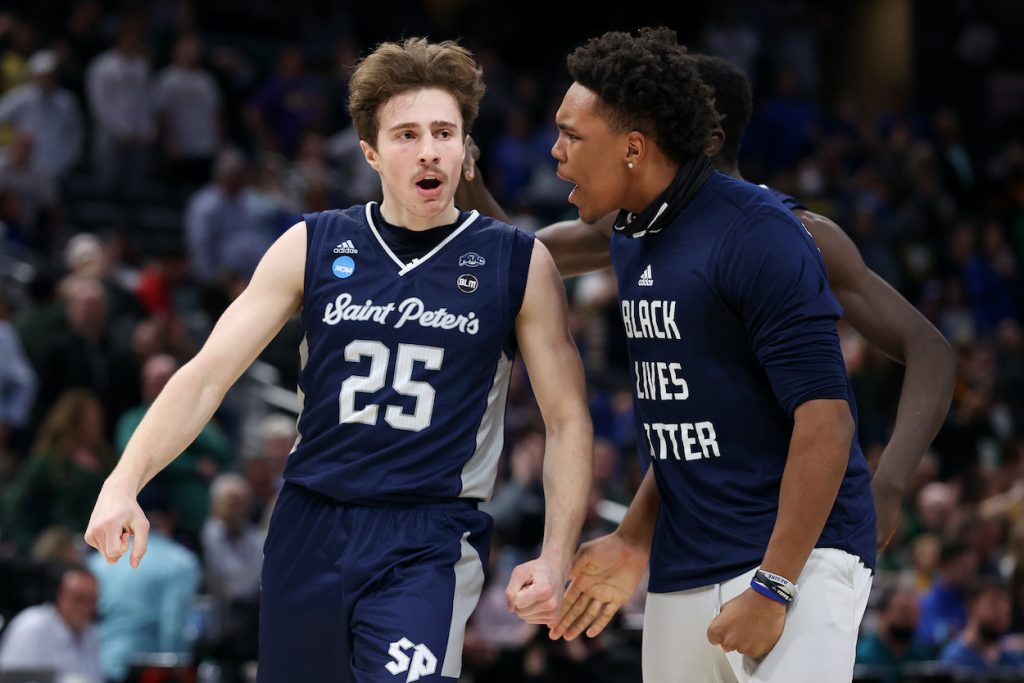 Saint Peter’s guard Doug Edert celebrates after drawing a foul against the Kentucky Wildcats in the first round of the 2022 NCAA March Madness tournament. The 15-seed Peacocks upset 2-seed Kentucky 85-79 in overtime, and 7-seed Murray State 70-60 to advance to the Sweet 16 for the first time in school history. Photo courtesy of Dylan Buell.

With the 2022 edition of March Madness in full swing, many students at Butler may find themselves searching for a team to root for in the later half of the tournament with the Bulldogs failing to make this year’s NCAA Tournament.

Luckily for Butler fans, there are several teams that have reached the Sweet 16 that are perfect for you to hitch your bandwagon to. Whether it’s a Cinderella story or a team looking to finally get over the hump, the Sweet 16 will provide fans with several intriguing teams that they can root for.

First off, there’s the biggest surprise of the 16 remaining teams, and a team that has gained national attention for their Cinderella run so far.

However, against all odds, the Peacocks shocked the world and defeated Kentucky 85-79 in overtime. Even after all the frenzy the Peacocks caused with their improbable win, they came back just two days later and beat 7-seed Murray State 70-60 to advance to the Sweet 16 for the first time in school history.

For the third time in tournament history — and for the second straight year — a 15-seed will be playing in the Sweet 16. The two previous teams, Florida Gulf Coast in 2013 and Oral Roberts last season, also captured national attention like they had never seen before, gaining thousands of fans overnight.

However, both of those teams ended up losing in the Sweet 16, even though Oral Roberts came very close to toppling Arkansas and advancing to the Elite Eight.

With this in mind, Saint Peter’s has the chance to make additional history by being the first 15-seed to advance to the Elite Eight. However, standing in their way is Purdue, a 3-seed that is extremely hungry to make a deep run and is loaded with talent at every position.

However, as we saw with Saint Peter’s two previous tournament matchups, it will take much more than pure talent to beat the Peacocks. Purdue will now have to step up to the plate and attempt to do what Kentucky and Murray State couldn’t do.

While Saint Peter’s may have captured the hearts of millions, there are several more double-digit seeds that also may be worth jumping on the bandwagon for.

Coming out of the ACC, Miami reached the tournament as a 10-seed — in a year where almost no one had them making the tournament before the season tipped off. However, after a strong start to the season, followed by a 14-6 record in ACC play, Miami found themselves back in the big dance for the first time since 2018.

The Hurricanes narrowly defeated 7-seed USC 68-66 in the first round in a game that saw Miami guard Charlie Moore sink the game-winning free throws with just a few seconds left.

Miami then went on to handily defeat 2-seed Auburn 79-61, a team which was considered by many to be a title favorite.

Led by Jim Larranaga, who has coached college basketball for almost 40 years and led 11-seed George Mason to a shocking Final Four appearance in 2006, the Hurricanes are a well-rounded team with five starters all capable of scoring 15 plus points a night.

Unlike some teams —  which have one or two players holding most of the spotlight — Miami plays team basketball night in and night out with many different players being able to step up and be “the guy” for one particular game.

Miami now gets a favorable Sweet 16 matchup versus another double-digit seed, 11-seed Iowa State — another newcomer that may be worth looking at.

Iowa State’s 2020-21 season wasn’t just bad — it was terrible. Iowa State finished 2-22 overall and failed to win a game in conference play, finishing 0-18, which was last place in the Big 12 by a significant margin.

However, after getting a new coach in TJ Otzelberger and several new transfers from different schools, Iowa State surprised everyone this season, finishing the regular season with a 20-11 record which included four wins over top 25 teams. The Cyclones climbed to as high as No. 9 in the AP Poll before sputtering a bit in early February.

Fortunately, Iowa State was able to regroup, and they now find themselves in the Sweet 16 as an 11-seed. The Cyclones have upset two solid teams so far, first defeating 6-seed LSU 59-54 in the first round, followed by a huge 54-49 win over 3-seed Wisconsin.

Senior Isaiah Brockington, who transferred from Penn State before the season, leads the team in scoring with 17.1 points per game. However, with only two scorers in double figures, Iowa State is much more reliant on defense, only allowing 62.3 points per game, which is ranked 20th in the country.

However, Iowa State has another big defensive challenge coming up against Miami, a team that as previously mentioned, has many different scorers. The entire Cyclones team will need to be ready to go if they want to keep Miami’s offense at bay.

Regardless of the outcome of the Miami matchup, it is already a guarantee that a double-digit seeded team will be reaching the Elite Eight – and maybe spoiling the hopes of some higher seeded teams looking to finally reach the Final Four.

For those who want to stay in-state and root for a team from Indiana, 3-seed Purdue is now the Hoosier State’s sole remaining team. While Purdue is a storied program who is frequently in the NCAA tournament, the Final Four is something that Purdue fans have been waiting to see for over 40 years now.

Purdue has not made the Final Four since 1980 — 42 years ago — despite many talented teams that looked Final Four capable. Since 1980, the Boilermakers have made three different Elite Eight appearances, but narrowly lost all three of the matchups.

In 1994, 1-seed Purdue fell to 2-seed Duke 69-60 in the Elite Eight, despite being tied at halftime. Duke went on to make a National Title Game appearance, where the Blue Devils ended up falling to Arkansas.

In 2000, 6-seed Purdue faced off against fellow Big Ten opponent, 8-seed Wisconsin, who had made a surprise run during the tournament. Despite a very close game, Purdue ultimately fell to Wisconsin 64-60, keeping the Boilermakers’ Final Four drought alive.

In 2019, 3-seed Purdue appeared to have a Final Four appearance in their grasp, leading 1-seed Virginia 70-68 with 5.9 seconds remaining. Virginia had one free throw coming before Purdue would get the ball back and have a chance to close out the game.

In a turn of fate, Virginia missed the free throw, but the team was able to get an offensive rebound after the ball was tipped beyond half court and after a perfectly-thread half court pass, Virginia hit a buzzer beater to tie the game at 70 and send it to overtime. Virginia then went on to prevail 80-75, keeping Purdue out of the Final Four for the 39th straight season. Virginia ended up winning the National Title, leaving Purdue fans to wonder what could’ve been.

The past is in the past for Purdue, and the Boilermakers now have a team that is capable of getting over the hump. With seniors Trevion Williams and Sasha Stefanovic – both of whom played in Purdue’s heartbreaking Elite Eight loss in 2019, have the experience that can help Purdue make a deep run in the tournament.

Sophomore guard Jayden Ivey adds firepower to Purdue, leading the team in scoring with 17.6 points per game — while making the All-Big Ten first team. This is a Purdue squad that is not only talented, but has depth.

Even better for Purdue, they get an easier matchup versus 15-seed Saint Peter’s and if they win they would not have to worry about facing off against a top two seed in the Elite Eight. Purdue still has work to do, but they have a chance to finally banish the ghosts of past seasons and finally get their elusive Final Four appearance.

2-seed Villanova returns to the Sweet 16 for the second straight year, after previous victories over Delaware and Ohio State. Villanova is an extremely experienced team with two fifth-year players — Collin Gillespie and Jermaine Samuels — who both played on the 2017-18 Villanova team that won the National Title.

Outside of Gillespie and Samuels, senior Justin Moore and junior Caleb Daniels have been two other big contributors to the team this season.

The Wildcats are currently on a hot streak, having won the Big East Tournament just before the NCAA Tournament and will also get an easier matchup going up against 11-seed Michigan – who upset 3-seed Tennessee in the second round of the tournament.

Providence has been a surprising team all year, with a 27-5 record and the Big East regular season titleholders for the first time. Providence was as high as No. 8 in this year’s AP Poll, which was the highest in school history.

Providence is a team that doesn’t necessarily look great on paper as Nate Watson leads the team in scoring with only 13.5 points per game, but the Friars find ways to win games when it matters most.

So far, 4-seed Providence has had a rather easy draw in the Tournament, first defeating 13-seed South Dakota State 66-57 to avoid an upset. The Friars then faced off against 12-seed Richmond, but won easily 79-51. Providence will now have to go up against their biggest challenge of the season thus far — 1-seed Kansas. Kansas is an extremely experienced and talented team who won the Big 12 tournament, and currently has a 30-6 record. Kansas has a whopping six wins over top 25 teams, and will have a chance to make it seven versus Providence on Friday.

The Friars will need to have all hands on deck Friday to reach the Elite Eight and keep their dream season alive — while helping the Big East stay in the tournament as well.