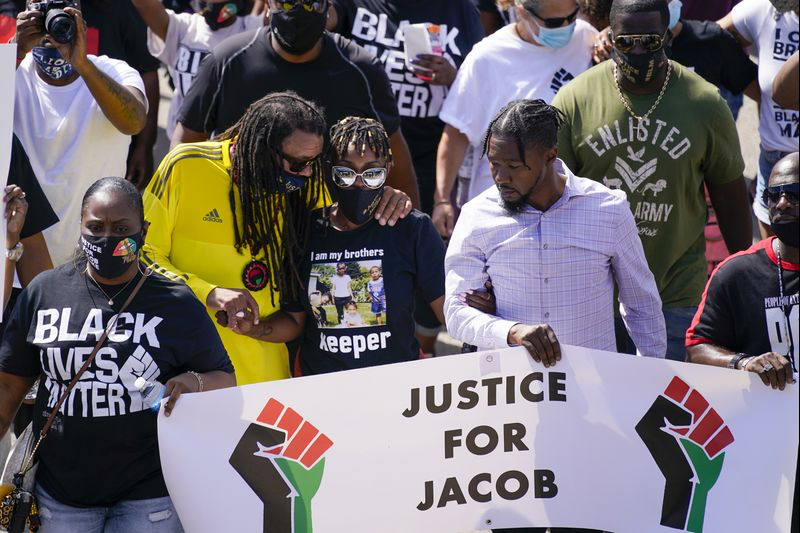 Jacob Blake’s sister and uncle march in Kenosha at a rally. Courtesy of Chicago Tribune.

The Aug. 23 shooting of Jacob Blake at the hands of Kenosha police officer, Rusten Sheksey, has proven to be a polarizing event. After the shooting of Blake, Kenosha erupted in protest. Because of this, a 17-year-old from Illinois traveled to Wisconsin with the intent of protecting property during the protests. This ended in him murdering Anthony Huber and Joseph Rosenbaum, and shooting Gaige Grosskreutz in the arm. News agencies have had different spins on these events — ranging from stories that discuss the egregious police in America, to stories that further entrench the country in problematic blue lives matter rhetoric.

The slew of news articles following these events exposes an important dichotomy: how victims and perpetrators of gun violence are represented. To be raised in America is to be inherently complicit in racist laws and institutions. Those who choose not to educate themselves inject their bias into society; individuals like this who work at news organizations taint their content with internalized racism.

White people have a history of treating Black folx as subhuman. When people see that Jacob Blake, a Black man, was shot in the back seven times by police, they find every way to justify the actions of the police. White people justify the police by highlighting victim’s undesirable qualities. By emphasizing Blake’s history of domestic violence and stressing  that he had a knife, we are taking away his humanity and ignoring the obvious problem in America: systematic Black deaths at the hands of the police.

Best practices for reporting on shooting state that the shooter’s name should be excluded unless absolutely necessary. In examining the top ten headlines filed under the name of the Kenosha shooter from CNN, Fox, Vox, BBC, and Breitbart, an interesting trend emerged. These particular outlets were highlighted because they are widely accessible and are historically moderate, right-leaning or left-leaning. CNN and Vox used the shooter’s name zero times in their headlines, while BBC, Fox and Breitbart used his name three, five and nine times, respectively.

The use of names in instances such as this only breeds notoriety for the perpetrator and potential future ones. News outlets use the names of domestic terrorists so frequently that the phenomenon has been dubbed, “the Columbine effect”. Frankly, it is inexcusable that news agencies can publish articles that so blatantly fly in the faces of all past, present and future victims of acts of terror.

This trend shows that BBC, Fox and Breitbart have directly gone against best practices and used this perpetrator’s name. These outlets glorify the shooter and sensationalize the act, making this all the more appealing as a way for young men to become infamous by any means necessary.

More concerning is the support that some outlets show for the shooter. With headlines like, “…spotted cleaning Kenosha graffiti before shooting,” “Accused Kenosha shooter’s lawyer claims self-defense amid new video” and “Twitter locks Ann Coulter’s account over … praise.”  These headlines demonstrate a clear disregard for the lives lost at the hands of this 17-year-old.  By showing even one ounce of support for him, the outlets risk glorifying the perpetrator and are liable for future copycats. Conservative news outlets put race before actions; a white perpetrator will always be more noble than his Black victim.

However, the opposite of this is true when speaking of victims; by saying their names we combat the notoriety of their killers and refocus the narrative on them. This is where news outlets have really dropped the ball.

CNN and Vox each have two headlines that name Jacob Blake directly. Conversely, BBC, Fox, and Breitbart each had ten, ten and seven headlines, respectively. While this may seem to redeem the right-leaning outlets, there is a caveat — Breitbart and Fox’s headlines are objectively terrible.

Headlines like, “Video Shows Jacob Blake Brawling with Police Before Shooting,” and “Fundraiser for Jacob Blake Tops $2.1 Million Despite Alleged Sexual Assault” take the focus off of Jacob Blake as a victim and try to justify his shooting. Similarly to how a common response to sexual assault is “What were you wearing?” people try to find anything in a Black man’s past to reconcile his death — or in Jacob Blake’s case, life altering injury. But it’s not that simple, not every action has its equal and opposite reaction. That’s physics, not human nature.

America’s racist ideals are alive and well in our news outlets. Because of this, police violence is an opinion when it should be an absolute. This will continue until news outlets make it a point to honor victims and refuse to provide notoriety to perpetrators. News outlets will continue to have Black folx blood on their hands until definite change is made.