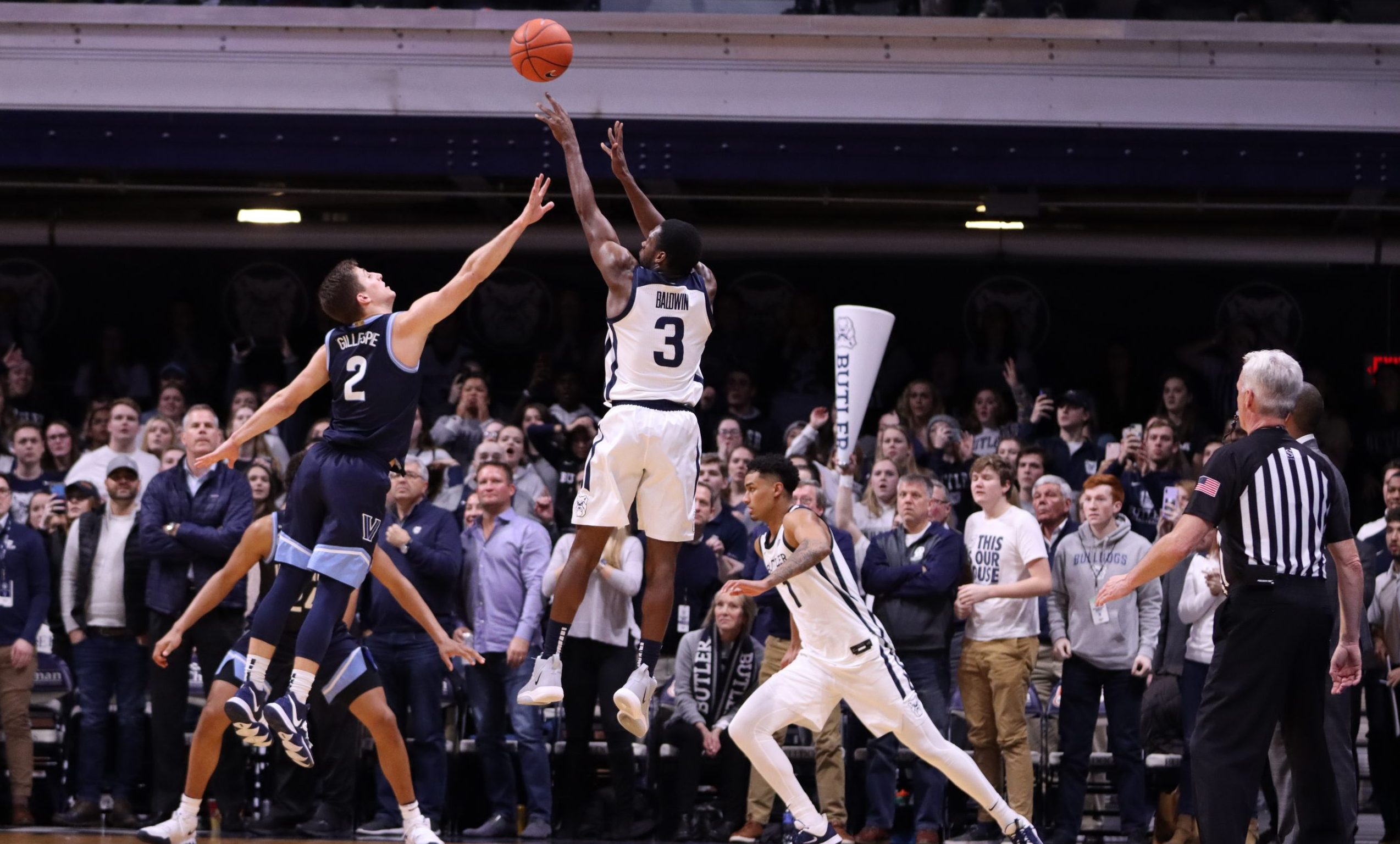 There was supposed to be more time for great Butler sports moments.

And after a few chaotic, fast-moving days in which the sports world came to a grinding halt, that — along with so many other major events — was all gone, leaving athletes, coaches, students and fans stunned and disappointed.

While it’s easy — and valid — to remain frustrated and upset, it’s also important to remember that despite the abrupt, unexpected ending to Butler sports this school year, there were plenty of thrilling moments throughout that will be remembered for years to come. Here’s a look back at some of the top Butler sports moments of the 2019-20 school year:

Men’s basketball climbs to fifth in the country, the team’s best ever in-season ranking.

After being picked to finish eighth in the Big East, the Butler men’s basketball team began its season 15-1 and started conference play 3-0 for the first time since joining the Big East. With strong senior leadership, increased depth — particularly in the frontcourt — and a top five defense nationally, the Bulldogs on Jan. 13 found themselves ranked fifth in the country in the Associated Press Top 25 and USA Today Sports Coaches polls. That was the highest in-season ranking in both polls in program history.

In his senior season, Baldwin cemented his status as one of the most clutch college basketball players in the country. On Feb. 5, after 39 minutes of high-level basketball — and a 19-minute rain delay — Butler and Villanova, both top 20 teams at the time, found themselves tied at 76 with 25 seconds on the clock. With time expiring, Baldwin faked a drive, stepped back and knocked down a triple to give the Bulldogs the victory and break the Wildcats’ five-game winning streak in the series.

No. 19 Butler takes down No. 10 Villanova at home. pic.twitter.com/oSTBXvDulz

And Baldwin had saved the best for last. In what turned out to be his final game in a Butler uniform, the senior scored 25 points in the second half and a career-high 36 points overall as the Bulldogs defeated Xavier 72-71 on the road on March 7 to end the regular season. Down two points with the ball and time expiring, everyone knew Baldwin was taking the final shot. But that didn’t matter. His 3-pointer and Butler’s interception on the Musketeers’ following inbound play led the Bulldogs to their 10th regular season conference win for the first time under LaVall Jordan.

He caps off a 36-point night with this @ButlerMBB game-winner! pic.twitter.com/HhoM7Q61Ro

On Nov. 16, in its final home game of the season, the Butler football team found itself tied with Valparaiso at 21 with under 20 seconds remaining. The Bulldogs traveled 44 yards on three plays in 19 seconds, and senior kicker Drew Bevelhimer converted on a 38-yard field goal with no time left on the clock as Butler picked up the 24-21 victory and the Hoosier Helmet.

Men’s soccer takes down Indiana University at the Sellick Bowl.

Over 4,000 fans showed up at the Sellick Bowl to watch the Butler men’s soccer team take on No. 5 Indiana on Sept. 24. Senior Brandon Guhl scored on the Bulldogs’ only shot of the first half, and senior Alex Lehtinen put Butler up 2-0 with a goal off an assist from Wilmer Cabrera, Jr. in the 52nd minute. The Hoosiers cut into that lead on a corner kick in the 83rd minute, but Butler was able to hold on for the victory thanks in large part to goalkeeper Gabriel Gjergji, who saved five of Indiana’s six shots on goal. It was the Bulldogs’ first win over their in-state rival since 2013.

How do you celebrate a win?
You play the War Song. #ButlerWay pic.twitter.com/q3J1HNT84E

The Butler women’s basketball team entered the season without over 50% of its scoring from last year, following the departures of graduated seniors Whitney Jennings, Tori Schickel and Michelle Weaver. After finishing nonconference play 8-3, the Bulldogs started Big East action with back-to-back home losses, including a 25-point loss to St. John’s. Butler then won nine of its next 10 contests, including a six-point victory over Marquette, to move into sole possession of second place in the conference standings.

This play sums it up for @ButlerUWBB. The Dawgs, picked 7th in the Big East, are now 9-3 and all alone in 2nd. Have won 9 of 10! They meet @DePaulWBBHoops in a showdown of the top 2 in @BIGEASTWBB Friday. Gutsy win over Villanova today at Hinkle:

In its first three seasons as a Butler program, the women’s lacrosse team won one, one and three games, respectively. This season, the Bulldogs were 5-2 to start the season, matching their win total from the previous three campaigns combined in less than half a season. Among Butler’s five victories was a 19-4 win over Detroit Mercy, which had beaten Butler in each of the last three seasons by an average of over eight goals.

Butler wins! Two goals each for Guerra and Pattison as the Dawgs move to 5-1. #GoDawgs #ButlerWay pic.twitter.com/G7QqVomKTQ

After falling on the road to No. 15 Wisconsin in overtime for its first loss of the season, the Butler women’s soccer team rebounded with a convincing 3-0 shutout of Michigan State at the Sellick Bowl on Sept. 5. Sophomore midfielder Katie Soderstrom tallied her sixth assist of the season, good for second nationally, in addition to a goal. Anja Savich and Macy Miller scored goals as well as the Bulldogs handed the Spartans their first loss of the season.

Softball gets off to historic start, nearly matches win total from last season in 25 fewer games.

The Butler softball team entered 2020 looking to rebound from a season in which it won just a third of its games and finished last in the Big East with a 4-12 conference mark. While they didn’t get to play any conference games this season, the Bulldogs were off to a strong start as they looked to back up their “Worst to First” team motto. Butler won its first three games of a season for the first time since 2003, and its 15-8 overall record was the best in the Big East. All four pitchers to take the mound for Butler had a 3.21 ERA or better, and the Bulldogs’ team ERA of 2.51 was easily the best in the conference.

After finishing just 6-12 in conference play in 2018, the Butler volleyball team enjoyed a bounceback season, nearly doubling its conference win total with an 11-7 Big East mark in 2019. The Bulldogs ended their season with back-to-back 3-0 sweeps of Xavier, first in Cincinnati on Nov. 22 and then at Hinkle Fieldhouse on Nov. 23 on senior day. In her final game at Hinkle Fieldhouse, redshirt senior Anna Logan sealed the victory with a kill.