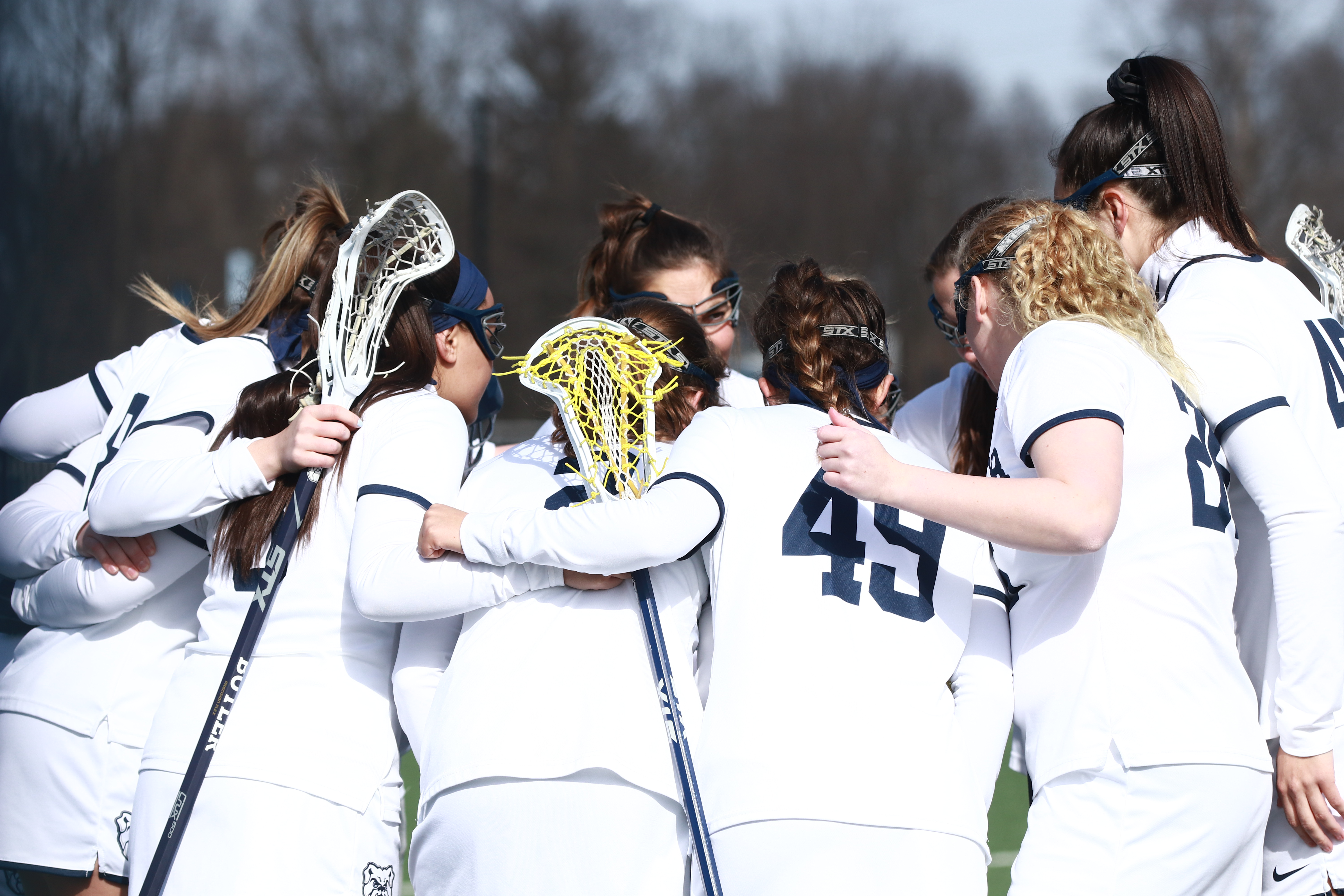 The Butler women’s lacrosse team huddles during a game last season. The Bulldogs are now 4-1 on the season. Collegian file photo.

The men’s basketball team got back in the win column on Feb. 29 with a 60-42 win over DePaul at home.  Defense won the day for the Bulldogs. Butler forced 17 turnovers and only allowed one 3-pointer. This was the team’s 20th win of the season, a mark that Butler has hit in 20 of the last 24 seasons.  Forwards Sean McDermott and Jordan Tucker led the team in scoring with 13 points each. Senior guard Kamar Baldwin was all over the box score and finished with nine points, eight rebounds, five assists, three blocks and a career-high six steals.  The Bulldogs will play their last home game of the season on March 4 against St. John’s.

The women’s basketball team finished their regular season with a pair of road losses.  On Feb. 28, the Bulldogs lost a tight contest to St. John’s 85-80 in overtime. The game was back and forth all night, and the lead changed 13 times.  Redshirt senior Katherine Strong registered her first double-double with 21 points and 11 rebounds and senior guard Kristen Spolyar added 28 points.

Then, on March 1, Butler lost 66-53 to Seton Hall.  The Bulldogs kept things tight in the first half, but the Pirates pulled away in the second.  Redshirt junior guard Genesis Parker contributed 14 points in the loss. Butler’s 11-7 conference record landed them as the fifth seed in the Big East Tournament.  The Bulldogs will have a rematch against Seton Hall in the first round of the tournament on March 7.

The women’s swimming team finished fifth overall in the Big East Championships this week.  Highlights for the Bulldogs included junior Anna Van Gheem setting a new school record in the 200-yard Butterfly and freshman Hannah Pugh setting the second-best time in school history in the 200-yard Backstroke. Van Gheem and Pugh finished sixth and eighth in those events, respectively. Villanova won the competition for the seventh consecutive year, while Georgetown and Xavier rounded out the rest of the top three.

After the baseball team’s midweek game against Indiana was canceled due to weather, the Bulldogs were swept in a road series at Evansville. Butler dropped game one 8-3 after the Purple Aces got hot for 16 hits, compared to only four for the Bulldogs.

The bats struggled again for Butler in game two, and the Bulldogs lost 4-1 after not getting a hit until the seventh inning.  Butler gave up two runs in each of the first two innings and could never get out of the hole. Sophomore infielder Kollyn All’s single that scored Jacob Margroff in the seventh was the only run for the Bulldogs.

In the weekend’s final game, Evansville came from behind for a 4-3 walk-off victory. Junior Nick Ortega’s single in the top of the ninth scored James Gargano and gave the Bulldogs a one-run lead.  But Evansville scored twice in the bottom of the ninth, first on a wild pitch then on an RBI single. Butler will have a chance to break their losing streak on March 3 in their first home game against Saint Francis.

The softball team had a busy weekend, playing five games as part of the Liberty Softball Classic in Lynchburg, Virginia.  The Bulldogs split their two games on Feb. 28. The team started the day with a 1-0 win over Hofstra. Junior pitcher Alyssa Graves was impressive in the win, registering 10 strikeouts. Sophomore Karli Ricketts’s home run in the fourth inning was the difference. Butler’s second game of the day resulted in a 1-0 loss to Penn.

On Feb. 29, the Bulldogs won each of their day two games. In a 4-0 win over Yale, Ricketts hit another home run to start things off before Butler scored three more to finish off Yale. Freshman Mackenzie Griman registered the shutout on the mound. In the second game of the day, Graves was excellent again. She struck out 11 and pitched the complete game.

The team finished their weekend with a 4-1 win over Fairfield on March 1. Junior Elyse Babb turned the momentum in Butler’s favor with a three-run home run in the third inning. Sophomore Madison Seigworth earned the win.

The women’s tennis team split their two matches this week.  The week started off with a sweep over DePauw on Feb. 26. Then on Feb. 29, the Bulldogs lost a tight contest to Northern Illinois 4-3.  Butler’s doubles teams performed well, but Northern Illinois won each of the final two flights to secure the come-from-behind victory. The Bulldogs’ record moves to 6-7 after this week.  They will be back in action beginning on March 14 with a trio of matches in Florida.

The men’s tennis team dropped a pair of road matches in Nashville, Tennessee this weekend.  On Feb. 29, the Bulldogs fell to Lipscomb 4-3. After falling behind 0-3, Butler stormed back and won the next three flights behind sophomores Thomas Brennan and Ryan Roegner and freshman Filip Tensing. Lipscomb won the final flight to secure the win.

Then on March 1, Butler lost to Belmont 4-2. The Bulldogs started the day by earning a doubles point, but could not keep up the Bruins in singles. Tensing secured the team’s only point in singles.

The women’s lacrosse team picked up a pair of wins this week.  First, on Feb. 28, the Bulldogs defeated Kent State 18-9 on the road in the snow. Junior goalkeeper Amanda Rumsey had a season-high 11 saves in the win. Twelve different players scored for Butler, led by sophomore Gabryelle Bodine with four.

Then on March 1, Butler defeated Akron 14-7.  The Bulldogs won with a balanced scoring attack as Bodine, sophomore Holly Hall and freshman Kaley Attaway all had hat tricks. This victory set a new record for wins in a season for the young program.