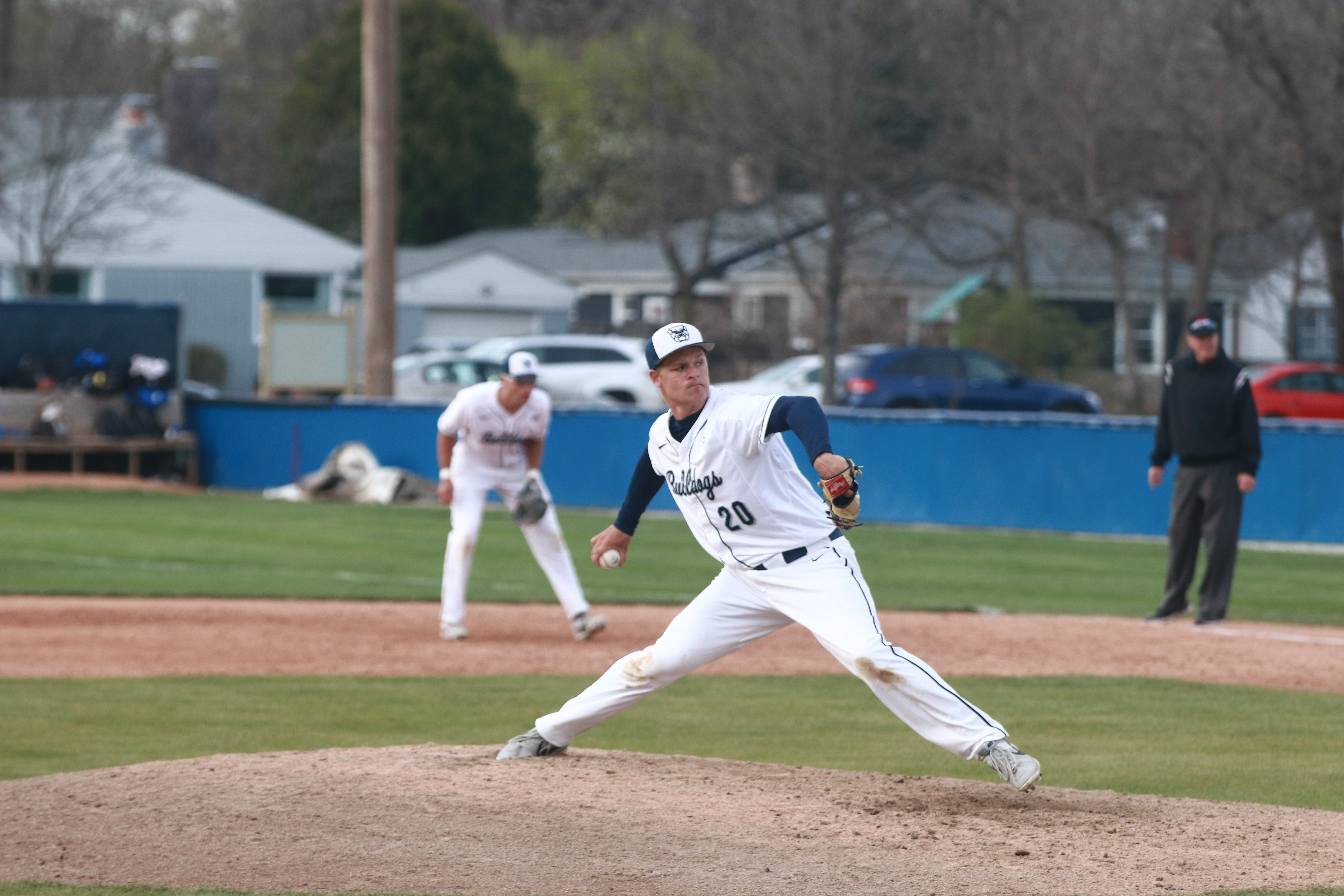 Butler reliever Jack Pilcher delivers a pitch during a game last season. Pilcher picked up his third save of the season against Western Illinois on Feb. 22. Collegian file photo.

The men’s basketball team had a tough week, suffering two road losses to top 25 competition.  On Feb. 19, the Bulldogs lost to No. 16 Seton Hall in a heartbreaker. In a back and forth contest, Butler fell behind in the final minutes but got hot from three and tied the game with 0.6 seconds remaining. Seton Hall scored on a buzzer beater with a lob from under their own basket to win the game. Four Bulldogs scored in double figures, led by senior guard Kamar Baldwin with 20 points and 6 assists. Sophomore center Bryce Golden added 17 points.

Then on Feb. 23, Butler lost at No. 15 Creighton 59-81.  It was a tough afternoon for the Bulldogs, and the final score somehow makes the game seem closer than it actually was.  Creighton was lights out from behind the arc and Butler could not keep up. Matters were not helped when Baldwin suffered an ankle injury at the end of the first half.  He did not return to the game. Senior guard Henry Baddley led the Bulldogs in scoring with 13 points.

The women’s basketball team won a pair of home games over the weekend.  First, on Feb. 21, Butler defeated Creighton 76-61. The Bulldogs won on the defensive end, forcing 18 turnovers and scoring 27 points off turnovers.  Senior guard Kristen Spolyar and junior guard Genesis Parker were the leading scorers with 20 and 19 points, respectively.

Then on Feb. 23, the Bulldogs beat Providence 51-42 on senior night.  A strong fourth quarter propelled Butler to victory. The Bulldogs outscored Providence 19-9 in the final frame. On a night to honor seniors, it was freshman guard Oumou Toure who led the way with 15 points off the bench.  Up next for Butler is an away contest with St. John’s on Feb. 28.

The women’s lacrosse team continued their season with a pair of games this week.  On Feb. 20, the Bulldogs defeated Detroit Mercy 19-4 at home. Junior Ashley Guerra led the team with five goals, and sophomore Lindsey Schreiber added four goals.

On Feb. 23, Butler’s win streak was halted after a 14-2 loss at Central Michigan.  The Chippewas started hot and gained a big lead. The Bulldogs struggled to create offense and could never get out of the hole.  Guerra and sophomore Layla Tattersfield were the goalscorers for Butler.

A busy week for the baseball team began with the announcement that head coach David Schrage would be taking a medical leave of absence. Assistant coach Ben Norton is acting as head coach in Schrage’s absence. In their games, the team performed well over the weekend, sweeping Western Illinois in a three game series.  On Feb. 22, the Bulldogs won game one 3-2. Junior pitcher Connor Schultz earned the win and senior reliever Jack Pilcher secured his third save of the season.

On Feb. 23, the team won both ends of a double-header to finish off the sweep.  The Bulldogs won game one of the day 9-4 aided by junior outfielder Nick Ortega’s grand slam.  Ortega finished with four runs and five RBIs in the game.

In the second game of the day, the Bulldog pitching staff was impressive in the 6-1 win.  The staff combined for 13 strikeouts. Junior outfielder Jacob Margroff and freshman infielder Jonah Wichman each tallied a pair of RBIs.  The Bulldogs remain undefeated heading into their next game at Indiana on Feb. 26.

The men’s and women’s track and field teams finished their indoor regular season at the Alex Wilson Invitational in South Bend.  In the entire meet, the teams set thirteen personal bests and eleven performances were top 10 all-time in school history. The women’s top performers were juniors Carson Fields and Rebecca Collester who each tied school records with times of 7.77 in the 60-meter.

The men’s performances were highlighted by junior Sam Robinson who set a personal best in the triple jump, while also moving into the top 10 in school history and finishing third in the event.  The teams will now begin preparation for the Big East indoor championships on March 1.

Then on Feb. 23, Butler fell to St. John’s 6-1.  Freshman Filip Tensing was the only Bulldog to win in singles.  The weekend’s results move Butler’s record to 11-5. The Bulldogs will continue their season with four straight road matches, the first of which will be in Nashville, Tennessee, against Lipscomb.

The women’s tennis team defeated Illinois State 4-2 on Feb. 23 in their only action of the week.  The win broke a four match losing streak for the Bulldogs. After falling behind in doubles, Butler was impressive in singles with wins from senior Kendal Wilby, sophomores Hallie Leblebijian and Sara Linn, and freshman Logan White. The Bulldogs will continue their home stand with a match against DePauw on Feb. 26.