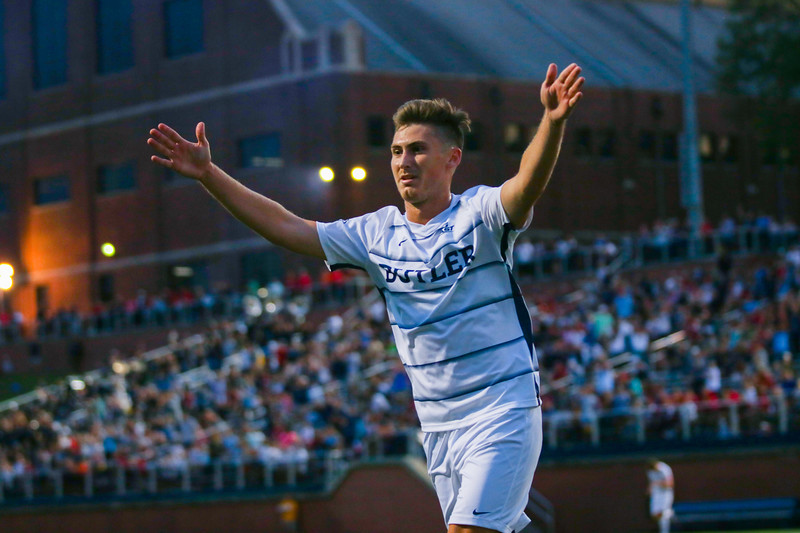 It’s a dark time for sports fans. Possibly the best sports month of the year was ripped from our hands — no March Madness, a delayed start to the MLB season and no NBA playoffs to look forward to. Typically, NBA games get a little stale after the All-Star break, but any sports fan would kill for a Tuesday night battle between the Hornets and the Knicks.

Something has to be done. While we don’t have control over when these leagues will resume play, we can at least indulge in some of the greatest moments they have to offer. Instead of watching and waiting for instant classics, we can dive deep into the depths of YouTube and the Facebook archives to dig up some of the best Butler sports history has to offer over the last 10 years.

It’s not an ideal time, but maybe this will make it a little easier. This is a Butler sports viewing guide when there are no sports to watch in reverse chronological order.

Just an aside, if something isn’t on the list that should be, it is probably because there was nothing close to a full game available online. For example, Butler’s wins over Villanova at Hinkle in 2017-18 won’t be on the list for that reason, so you’ll have to watch your own court storming videos. And neither will Butler men’s or women’s soccer Big East conference finals, unfortunately.

Anytime there is a link to a certain game, it will be provided. Fortunately, the majority of Butler sports are streamed on YouTube or Facebook Live, so a number of them are easy to find.

Butler vs. IU on the pitch is quietly one of the more electric annual matchups that Butler sports has to offer. Last fall was no exception to that rule. Indiana rolled into Butler as the No. 5 team in the country and undefeated on the young campaign. The Bulldogs were 3-3 and off to a solid start after a disappointing 2018 campaign. Despite a number of ties with the Hoosiers, the Bulldogs hadn’t taken down their in-state opponent since 2013. That streak would end on this night. More than 4,300 people saw the Bulldogs defeat the Hoosiers despite 13 more shots from Indiana. There were goals from seniors and some pretty spectacular goalkeeping from sophomore Gabriel Gjergji.

Butler football made the trip to Youngstown State to begin its 2018 season with a significant disadvantage in one category — the scholarship category. Football is not a scholarship sport at Butler, it is at Youngstown State. So, the Penguins came in with a 63-0 edge in that category.

Butler scored first but then was shutout for the better part of the next three quarters. Then, they played possibly the best quarter in Butler football history. They were down by seven with 90 seconds left and won by two. It’s the greatest upset in college football history that no one will ever know about. Greater than Appalachian State over Michigan and any other Division I upset you can think of. If nothing else, watch the last quarter. It’s spectacular.

High-level soccer has become a mainstay at the Sellick Bowl on both the men’s and women’s side. Both programs have players that graduated in the last three years playing at the highest level of the sport in this country. Goalkeeper Eric Dick is a part of Sporting Kansas City of the MLS and Paige Monaghan represents Sky Blue FC of the NWSL.

But this particular classic is on the men’s side. One of the better Butler soccer teams ever, the Bulldogs made it to the Sweet 16 of the 2017 NCAA Tournament. After beating Lipscomb in the first round, Butler faced off against No. 16 overall seed VCU — a completely different meaning than a 16 seed in the men’s basketball tournament. On the road, Butler was down 1-0 at halftime. But then four more goals were scored in the second 45 minutes, three of them by Butler.

There is no full game available online, but at least watch the highlights. The Butler softball team, as a four seed, came back from a 6-0 deficit in the championship game to defeat St. John’s

This entire list won’t be at the expense of the Hoosiers, but for another moment, they will be at the short end of a Butler classic. This one comes from the second installment of the Crossroads Classic at Bankers Life Fieldhouse.

No. 1 in the country at the time, Indiana had three starters who would go on to play in the NBA — including a young Victor Oladipo, who has made his way back to the same building as a professional. The Butler starting five featured Roosevelt Jones, Alex Barlow and Andrew Smith.

The Bulldogs trailed by four at halftime, 37-33, coughing it up eight times for 12 Indiana points. What followed was 25 minutes of thrilling basketball and some clutch shotmaking down the stretch from Butler’s veteran backcourt. I won’t spoil the ending, but let’s just say it was a walk-on who came up big for Butler in the closing seconds. Maybe living in the shadows of the tournament heroics just a couple of years earlier, this one is a must-watch.

This one is going to sting a little bit. But wow, this is an incredible college basketball game. Without the game being incredible, the story is awesome. Butler, a small private school out of Indianapolis coming from the Horizon League led by a baby-faced assassin in Gordon Hayward and a future NBA coach. As a five seed, Butler beat the No. 1 seed Syracuse and No. 2 seed Kansas State en route to a Final Four — a Final Four in Indianapolis at Lucas Oil Stadium just five miles from Hinkle Fieldhouse.

But then the game was awesome, too.

There’s a loser in every single classic sporting event, and that holds true in this one. It happens to be Butler this time. But for any Butler fan — and any college basketball fan for that matter — this game is forever a classic and deserves to be on the list.

Almost exactly a year later, Butler finds itself in the same place: playing for a national championship. This one is tough to watch as the Bulldogs struggle to just 18.8% from the field as the Kemba Walker-led Huskies cut down the nets in Houston. But any time Butler makes it to a national championship game, it goes on the list.

The games that got them there:

I won’t go into detail about every other NCAA tournament game from 2010 and 2011, but here are a few that you need to watch.

It’s not as fun as watching history being made. But for the time being, these Butler classics may get the heart racing while sports are absent from everyone’s lives.