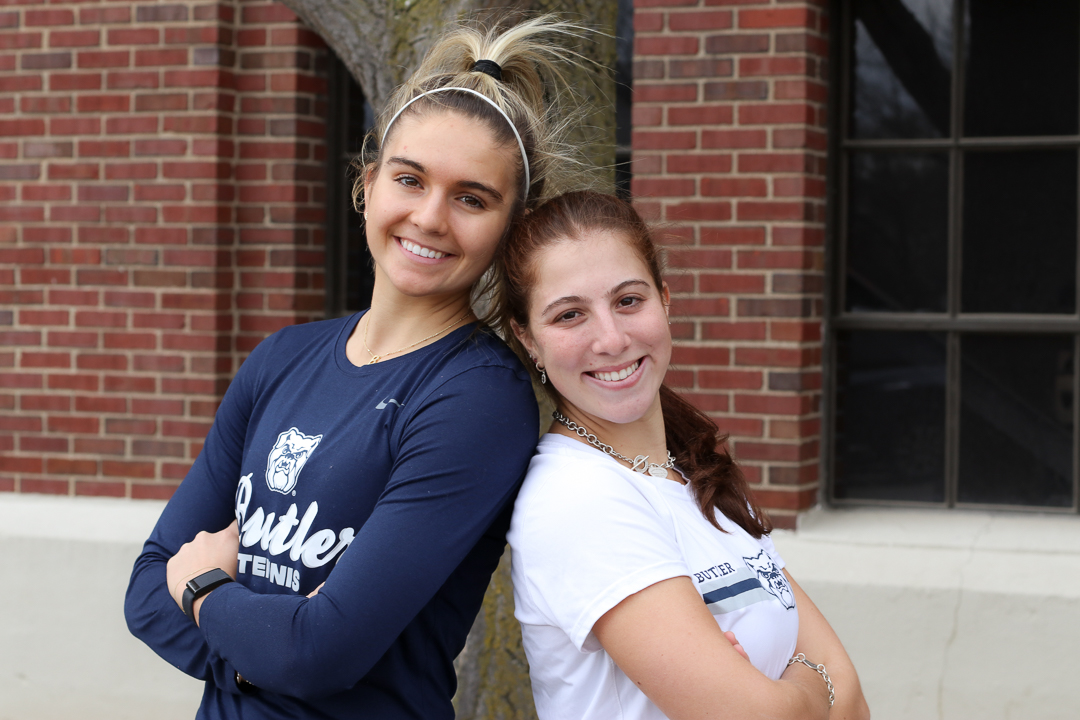 ‘Welcome to the Team’ is a Q&A series where the Collegian sits down with first-year student-athletes who are entering their first season at Butler University. These articles will address why they chose Butler, what they hope to get out of this season and some personal tidbits that you won’t find anywhere else.

Cybil Stillson: When did you start playing tennis and what made it a sport you wanted to pursue in college?

Chase Metcalf: I probably started when I was like nine years old, but I didn’t take it seriously until eighth grade when I was 14. I wanted to play college tennis because I missed the team aspect of the sport because tennis is super individual. Plus, I have loved tennis my whole life.

CS: During the recruiting process, what made Butler stand out that ultimately led you to become a Bulldog?

CM: The team and the coaching staff. They’re all amazing. I just loved that they were very uplifting and thought I had a lot of potential.

CS: What is your best shot in tennis and why?

CM: Probably my serve, because I can do the slice that no one really understands. I prefer to serve on the left side of the court because I can make [my serves] go out wide.

CS: Who would your dream doubles partner be and why?

CM: That’s hard. Probably Roger Federer just because he is the greatest of all time and is an icon.

CS: What does a typical game day look like for you and how do you prepare yourself for a match?

CM: I honestly don’t do anything special, just have the team meal, listen to music, and then just go out there and have fun. My favorite pre-match meal is either eggs or a good breakfast sandwich. And my favorite warm-up song is probably “Trophies” by Drake.

CS: Do you have any superstitions either before or during a match?

CM: Yes, I can’t sit down during changeovers. I have to stay standing.

CS: What professional tennis player would you compare your own game to and why?

CM: That’s another hard one. I always got told I played like Petra Kvitová, but I don’t see that. I would probably compare myself to Rafael Nadal just because he is another left-handed player.

CS: What match are you most looking forward to during the spring season?

CM: The Big East Conference, just because I really want to make the NCAA Tournament this season. It is important to me and the team to make it to the tournament because we will have to win the Big East in order to do that. And that has never been done in Butler’s history for women’s tennis, so it would be an unreal experience.

Cybil Stillson: Since you’re from Dallas, Texas, did you have a previous connection to Butler? Or, if not, how did Butler get on your list as a possible university to play tennis at?

Jordan Schildcrout: My coach back at home where I train was coached by the head coach here at Butler when she played at Purdue like 20 years ago. So she connected me to him and that’s how we met. I did look at a school in Texas called Trinity, but I also felt like I wanted to go somewhere farther away.

CS: You won a silver medal in junior mixed doubles at the World Maccabi Games in Israel. What was that experience like and how will you use that experience to your advantage here at Butler?

JS: That was probably the best thing I’ve ever experienced in my life. Being able to represent my country in a different country, it was like the Olympic Games. It was so much fun. I met some lifelong friends and got to compete at a really high level. So I just think the team aspect of it will help me here because I was able to have that team experience prior to coming to college and I had competition from all different kinds of players.

CS: When did you start playing tennis and what made it a sport you wanted to pursue in college?

JS: I started playing when I was five years old, but probably more seriously when I was like 13. Definitely the team aspect made me want to continue playing in college. Growing up we had tournaments called zones which were like college style where there were different teams that just made me love [tennis] so much more.

CS: What is your best shot in tennis and why?

JS: Definitely my volleys or my backhand, but probably volleys because it just comes so easy to me.

CS: Who would be your dream doubles partner and why?

JS: Like Chase said, probably Federer just because he is the best of the best.

CS: What does a typical game day look like for you and how do you prepare yourself for a match?

JS: I usually wake up in the morning a few hours before my match. Before I play, I will eat and then go warm up with the team. Yeah, that’s pretty much all I do, nothing special.

CS: Do you have any superstitions either before or during a match?

JS: I don’t change the score. I let my opponent do it because I think I would mess [the match] up with my touch.

CS: What professional tennis player would you compare your own game to and why?

JS: I would say Martina Navratilova just because she is an awesome player.

CS: What match are you most looking forward to during the spring season?

JS: It would be either Xavier or Purdue probably because my coach and friends who I have trained with back home are all going to come out for that one.