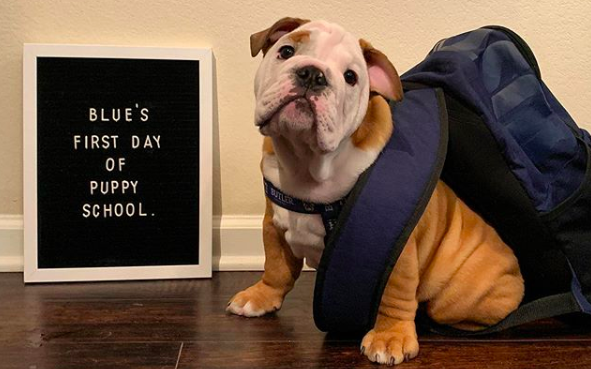 Butler Blue IV, Butler University’s fourth live mascot, has had his fair share of time in the spotlight since his debut on Jan. 22. Since then, he’s been learning the ropes from Butler Blue III, also known as Trip, who will continue to be Butler’s full-time mascot until May 9.

As for now, it’s time for Blue to start his formal training in preparation to take over for Trip.

Evan Krauss, mascot manager for the Butler Blue live mascot program, said the purpose of puppy training is to teach your dog to be a “well behaved citizen.” So far, Blue has been focusing on basic puppy skills: name recognition, eye contact, greeting people correctly and sitting.

Blue will then start his personalized plan at Bark Tutor, the direction of which will be determined after he completes his initial three weeks of obedience training.

Twice a week, Krauss and his wife Kennedy work one-on-one with Blue’s trainer to reinforce the skills he learned in class that day. Blue is Krauss’ first dog but not Kennedy’s, though Krauss had a long time to prepare and learn from Trip.

“My first job is the dog,” Krauss said.

One thing Krauss and Kennedy have been working on is for Blue to see them as their first point of contact. Krauss said dogs reflect their own perceptions and feelings from their owners, so they’ll mirror our emotions.

“So if they look to us, and we’re also feeling upset and scared, then they’re going to kind of feel the same way,” Krauss said.

For example, when Blue hears a garbage truck while on a walk and looks to Krauss for direction, Krauss must show that the truck is not something to be afraid of.

“If Blue hears the garbage truck, looks at me, and I’m totally fine with it and I say, ‘Hey, buddy, we’re all good to go,’ he’s going to be all good to go for the future,” Krauss said.

On the second day of Blue’s training, Krauss spoke to their trainer about what exactly Blue needed to do to prepare for his job as a mascot. The trainer said it’s imperative that Blue masters his basic puppy principles.

Once Blue has his personalized plan, he will add mascot training on top of that. This training will mostly come from observing Trip at games and on campus. So far, Blue has shadowed Trip at men’s basketball games to start preparing for next year. Krauss said the dogs are going to be like brothers.

“His first few games at Hinkle have gone remarkably well,” Krauss said. “He hasn’t been anxious or scared at all. After he did his whole debut, we went back into the back room that we were in and he was zooming all around and excited. And so that was really good to know and good to have before his formal training began.”

Michael Kaltenmark, director of external relations and Trip’s handler, said there are nuances about the job that he hopes Blue will learn from Trip.

One of Trip’s skills that Kaltenmark hopes will rub off on Blue is his innate drive to run for the bone at each home basketball game. Although Trip may be retiring soon, Kaltenmark said he hasn’t slowed down one bit.

“To retire him, I think it’s going to be a bit of a shock to his system,” Kaltenmark said. “I think he’d prefer to keep going, but he is also eight so we have to start to look out for his best interest, and you know time’s working against him at this point.”

“That’s the best way you can potty train a dog as well,” Krauss said. “As just, ‘Oh, this dog doesn’t use the bathroom inside and he goes out.’…So watching Trip at events, at games, that’s how he’s going to nail down all that as well.”

Blue has been holding regular “puppy hours” from 9 to ll a.m. in the bookstore every Friday, something Trip also used to do. Krauss said this is a more controlled environment for students to meet Blue, where he has access to a fan, water and open space.

“I love bragging about our dogs,” Krauss said. “It’s my favorite thing to do. And it was really fun to see our students rally around him. I have a soft spot for our students for sure. I was one not too long ago, but it’s starting to get a little longer now. My favorite part so far has been how our students have started to adopt him as their dog. And that’s what he is.”

Sarah Stahovich, a sophomore dance pedagogy major, was at the bookstore during Blue’s puppy hours on Feb. 7.

“He’s very cute and I think it’s really good for the school that he’s being presented in this way and going through all the training,” Stahovich said. “It’s great for the students to all interact with him and everything, and he’s a great addition to Butler.”

Blue will soon go on Butler Bound trips to give prospective students their admission letters and will go to the Big East tournament in New York City alongside Trip, given that Kaltenmark, who recently underwent a kidney transplant, is in good health.

The changing of the collar ceremony will be on Feb. 29 at the men’s basketball game versus DePaul University. This is a symbolic “passing of the torch” between Trip and Blue, however Trip will not be fully retired until commencement on May 9.