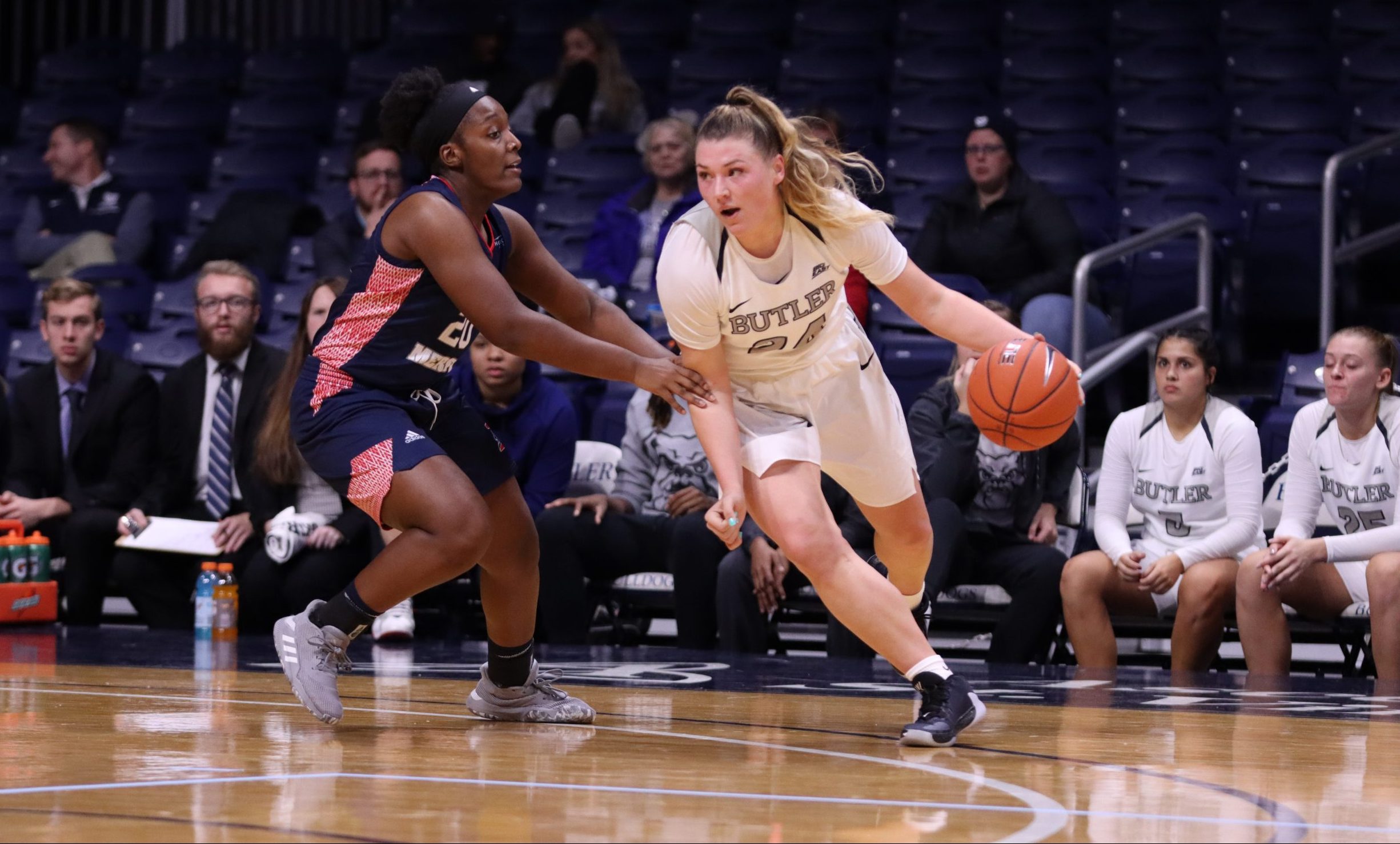 Her teammates call her “bucket-getter.” She dropped 69 points as a third-grader in a boys and girls basketball game. She’s the third-highest scorer in Indiana high school girls’ history. In her first college game against East Tennessee State, she dropped 25 points, and went on to average 12.8 points in her first 14 games.

Then, one day, then-freshman Butler women’s basketball guard Kristen Spolyar couldn’t get buckets. In the first minute of the 15th game of the season against Xavier on Jan. 8, 2017, she leapt up for a cross-court pass and collided with an opponent.

She sat out the rest of the game. Not that she wanted to. Later, an MRI revealed a torn ACL. For the first time in her life, and the next nine months, Spolyar could not get buckets — much less run.

“Everyone was always asking, ‘Have you lost it? Are you this? Are you that?’… And then you question: Why did this happen to me? Was I not in good enough shape? Was I not strong enough?” Spolyar said.

But even when she couldn’t run, Spolyar found a way to get buckets. Had to. Her daily routine was to shoot 3-point shot after 3-point shot till she made 300.

She returned on Nov. 11 against Austin Peay, the first game of the 2017-18 season. Over the next two seasons, she dealt with more obstacles  — another major injury and more losses. But she still got buckets, averaging 13.7 and 11.9 points per game in her sophomore and junior seasons.

Now, in her senior season, Spolyar is posting a career-high 18.9 points per game on 44.7 percent field goal shooting. After averaging 27.5 points in contests against Marquette and No. 14 DePaul, Spolyar was named Big East player of the week.

She’s proud of that. But for Butler to snap its 23-year NCAA tournament drought, Spolyar is going to have to do more than get buckets.

Here’s how tough Spolyar is. Versus Xavier on Jan. 9, 2019, Spolyar smacked her knee against the hardwood, the same one in which she tore her ACL. She finished the game, but after the game, she underwent an MRI. The doctors found she had a torn meniscus, and advised her to undergo surgery right away. But Spolyar had other plans.

“No, I’m playing,” she told the doctors. “I’m not getting surgery.”

She called her parents, her coach Kurt Godlevske, and her teammates, telling them the bad news, and her decision. She would play. Had to. She was “fine.” Whatever that meant, her teammates and coaches understood.

“She’s Kristen. She gets through it,” Shae Brey, Butler senior forward and Spolyar’s roommate of four seasons, said.

Spolyar scored, but her efficiency plummeted. Over the next 10 games, she bumped her scoring average up to 15.5 points per game, but on 37.5% field goal percentage.

In huddles, Godlevske remembers Spolyar, hands on her knees, saying, “I’m having trouble moving and defending.” The next day, he’d check in: “How are you feeling? You need rest?” To which, she’d respond, “It’s a little sore, but I’m fine.”

She had to play — not for herself, but for last year’s senior captains: Whitney Jennings, Michelle Weaver and Tori Schickel. In their freshman, sophomore and junior seasons, those three played on Butler teams that lost 21, 25 and 17 games, including a 7-game losing streak, 6-game losing streak and 13-game losing streak.

Spolyar was there for the two of the last three years. She remembers a palpable dread spreading throughout the film room. Hang-outs consisted of sitting in a circle, shedding tears and devouring ice cream. So, by the time Spolyar tore her meniscus midway through her junior season, the Bulldogs at 14-1 and winners of nine consecutive games, darn right she was going to play.

“I think as a group, they had so many low moments,” Spolyar said, “so I thought, ‘What can I do for the betterment of the team?’ For me not to play, would have made it selfish.”

After starting 15-1, Butler finished 5-4, losing to Cincinnati 72-66 in WNIT Sweet 16. Remembering all the losses, tears streamed down her face. She hugged the seniors, then gave a speech expressing her gratitude.

“She expressed how thankful she was that she was able to play with us,” Jennings said. “And that she hated to see our careers come to an end. She poured so much into last season, as well as us three seniors did. And so, it hurt her to see us hurting. She’s always been super invested. It’s gonna be a sad day when Kristen Spolyar leaves Butler women’s basketball.”

In early September, Spolyar walks into the film room for an interview with a reporter, with teammate Katherine Strong trailing behind her. She sinks into a reclining chair in the front. Strong takes a seat in the back.

“Have you gotten her autograph yet?” Strong asks a reporter. “There’s still time! Get it while you can.”

Slowly tugging on the drawstrings on her gray sweatshirt, Spolyar hides behind her hood. Leaning forward, she wiggles her feet into a pair of grey Uggs.

Minutes earlier, Spolyar was named to the Big East All-Preseason team. Strong pulled out her phone and scrolled through the Big East Twitter feed, pressing play on a highlight reel of all the preseason All-Big East players, beginning with Spolyar performing a spin-move and sinking a jumper.

Spolyar came to Butler as the Indiana girls high school single-season scoring leader and owner of 17 Lebanon high school records. But she doesn’t want you to know. She doesn’t think her teammates know.

While Strong calls her “humble GOAT” — greatest of all time — and other teammates call her “Bucket-getter,” Godlevske has no nickname for Spolyar.

The coach gave nicknames to last season’s seniors based on their leadership styles. Jennings was the fire, Schickel the rock, and Weaver the grit. Jennings was loud and assertive, directing the offense. Schickel was soft-spoken and consistent, stifling opponents in the post. Weaver was quiet and confident, instilling fear into opponents.

A particular story sketches an outline of Spolyar’s potential nickname.

After the first game of this season, freshman Tenley Dowell suffered a torn ACL in the practice. Here was Dowell, the starting point guard for the first game — recording 12 points and five assists — out for the year. To the average fan, her future looked bleak. But not to Spolyar. After all, she walked in her shoes, recovered and improved. Why couldn’t Dowell?

“You will be OK,” Spolyar told Dowell. “There are a million other people who have torn their ACL. Rehab is tough, but it’s just like, ‘Are you mentally strong enough to put in the work?’ The trainers are gonna have you prepared, so you know you’ll be OK on the court. I think my mentality, and my outlook on life, are always very positive. You can’t do anything with negativity. That will always make things worse.”

Without Dowell, Butler reeled off wins against Wagner, Detroit Mercy and Eastern Kentucky. However, in their first road test, at Ball State University on Nov. 23, Butler lost 74-70.

Godlevske envisioned a more cohesive unit. At multiple points in the offseason, he claimed that this season’s team had more potential than last season’s team. Except, he issued one caveat. The team needed to replace last season’s leaders.

So in the meeting with this season’s seniors, he emphasized “growth areas.” That is, with five transfers and four underclassmen, Butler needed more leadership.

Spolyar took Godlevske’s words to heart. In the huddle before the next practice, Spolyar told her team to watch more game film as a means to eradicate their defensive mistakes. Since then, in the next 13 games, Butler has allowed 57.6 points per game, moving them to second-best in points allowed in the Big East.

On April 1, after Butler’s final loss of the 2018-19 season, Spolyar underwent microfracture knee surgery. In May, she started rehabilitation. When she wasn’t firing shot-after-shot, she was cycling on a stationary bike. Or stretching on the underwater treadmill. Whatever she was doing, she had to see — feel — progress.

“If she was told to ride the bike for 30 minutes, she went in there and rode the bike for 45 minutes, twice that day,” Godlesveke said. “She’s just that type of person.”

Soon, in May, Spolyar joined Shae Brey and Genesis Parker, running laps around the track. Seeing her accelerated progress, Godlevske was proud, but worried. He had to remind her to slow down, to take her recovery in stride. During spring meetings, in which he usually gives each player one to two skills to improve upon, Godlevske reminded Spolyar of life after basketball.

“When you decide to be a mom, I want you to be able to get down on the floor and play with your kids,” he told her. “To do that, let’s get through this year, and get you in the best possible shape and condition so then we can hopefully limit those possible ramifications later in life. It’ll also set you up to have the best possible year.”

Once Spolyar was cleared for game action, there was a problem: the team was flying to its offseason trip in Italy, where it would only have three practices. So Godlevske had to make an exception.

“We had to beg to get there an hour and a half early just so we could run some stuff with her on the floor,” Godlevske remembers. “I think it was her: ‘Hey, I get to run, I get to be out here with everybody else, I get to be a part of things again.’”

In a 76-55 win against Akron on Dec. 8, Spolyar scored 17 points. After the game, she hugged her parents, signed fans memorabilia, and started to beeline towards the locker room, until she was stopped by a reporter searching for a game recap quote.

“You probably noticed this,” Spolyar said, smiling and pointing to the lower left part of her lip, which was bleeding and bulging

During practice a few days before the game, in a scrimmage against the practice squad, an opponent shouldered into her. Spolyar rushed to the emergency room, where she received stitches. But she played. Had to.

After dropping their first two conference games, Butler has won four of its last five contests and sits at 4-3 in the Big East. Still, the Bulldogs are excluded from ESPN bracketologist Chris Creme’s tournament projection. Not on the bubble. Not on the outside looking in. Nowhere.

At 4-3, Butler ranks sixth in the Big East, but their path only gets bumpier. In seven of their next 11 games, the Bulldogs face teams above .500 in Big East play.

To stay in contention, Spolyar must get buckets. To defy expectations and make history, Kristen Spolyar has to lead.