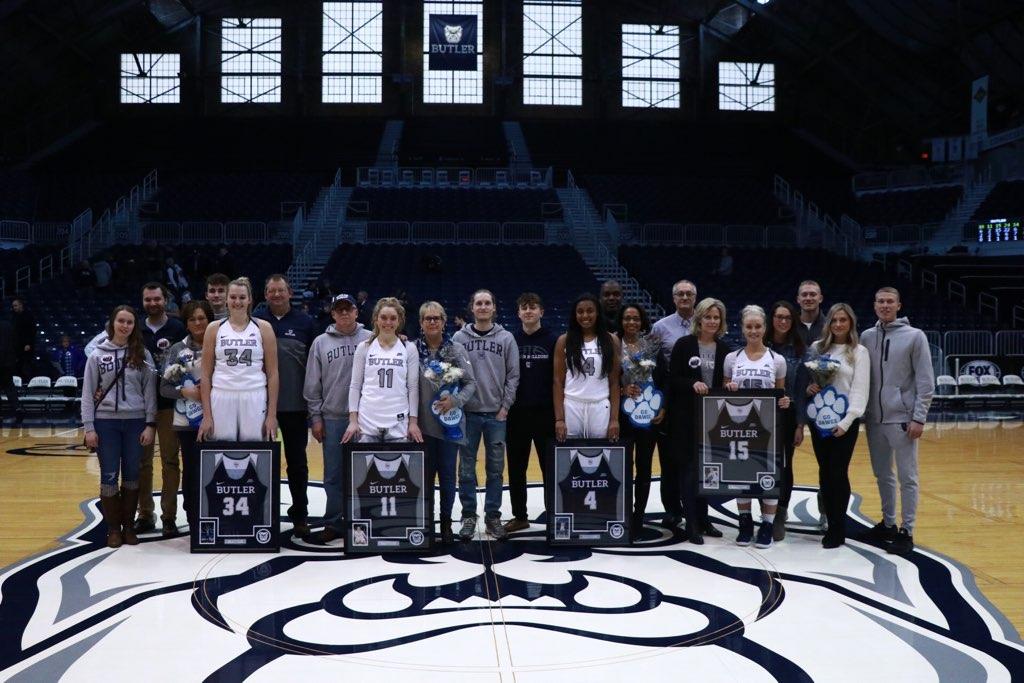 He pointed to them, one-by-one, and spilled his thoughts: their nicknames.

He pointed to Jennings. “You’re the fire.”

“She is the verbal one, she demands things,” Godlevske said.

He pointed to Weaver. “You’re the grit.”

“She’s going to show you. She gets in their face and frustrates them,” Godlevske said.

He pointed to Schickel. “You’re the rock.”

All three laughed. This is funny. All three blushed. This is embarrassing. Yet, Weaver, Schickel, and Jennings couldn’t help but agree.

Godlevske continued by saying, whatever happens — make or miss the NCAA Tournament — he was proud of all of them.

He was proud of what they accomplished. He was proud of Whitney Jennings, who scored the fourth most points in a single season in program history, Tori Schickel, who earned Butler’s all-time rebounding record this season, and Michelle Weaver, who is sixth in the country in steals.

Taylor Buford wasn’t there, but she earned a nickname, too: Fortitude.

“Every year she’s been here she’s been injured. Never changes her demeanor.” Godlevske said. “She’s the one that’s going to be very successful in life because she’s got the character and toughness to battle through anything.”

This story — one about the legacy of Butler’s winningest team since 2009-10 with it’s most wins in the Big East since joining in 2013, and potentially the first team to make the NCAA Tournament since 1996-97 — wouldn’t be a story, if not for the four seniors. Every story ends in one way or another — this one could end as soon as March 10 — though the journey is just as important, especially for this tight-knit group.

Tucked away in the corner of Hinkle Fieldhouse is the women’s basketball film room, and it was inducing heat like an oven — the AC broke the day before — though the three seniors slotted inside were relaxed.

Weaver was plopped in a chair, her left leg propped up, right leg dangling. Schickel mirrored the same position from across the small film room, though socks were missing from her long feet. Jennings — her eyes usually soul-piercing — hunched forward in a seat to Weaver’s left, her pupils wide and unfocused.

Consider it a microcosm of how they feel about this season, in which they’ve won 21 games, equal to the last two years combined.

Boosting their resume is a key win over Marquette, though Godlevske believes one win in the Big East Tournament “puts them in the discussion” and two “gives them hope”. Needless to say, there is work to do. The next game comes on March 10, against 14-15 (8-10) Creighton, who the Bulldogs have already beaten twice this season.

Forget the matchups. The Bulldogs certainly are. They are too focused on playing their style of basketball. The dry-erase whiteboard in the film room, which the coaches scribble on every pregame with three keys to the game, notes: “PLAY OUR GAME.”

Their game? A little complicated — lots of moving parts. Begin from the top, with “quarter basketball,” splitting their struggles and strengths into the five-minute interval of media timeouts.

Within those quarters, Butler hangs their hat on tough team defense, with the statistics to boot. The Bulldogs allow 56.6 points per game, first in the Big East. Spearheading that defense is Weaver — the Big East Defensive Player of the Year and the conference’s leading steal-getter with 3.4 per game — whom Butler entrusts to lock down the opposing team’s best scorer.

That’s not to say the Bulldogs can’t score, either. They certainly can, through unselfish play. On the whiteboard is another key: get Schickel the ball. Doing so opens up the rest of the court, specifically deep bombs from Jennings.

Their game? In a less tangible sense: having fun.

“Winning is more fun,” Jennings said, as Schickel and Weaver cackle simultaneously. “There is a lighter, happier mood across the locker room, in practices, play with more joy, play more care-free.”

Above all, Godlevske recruited players with whom he can hold laid-back conversations in his office — such as the conversation with junior Kristen Spolyar of her aspirations as a talk-show host — as he often does, while he chows down on his lunch-time salad from Olive Garden.

They have fun off the court, too. The second kind of fun is visible to fans on Twitter, a platform through which the team — coaches included — clown one another. After the Marquette win, for instance, Godlevske tweeted Schickel’s post-game meal: a half-eaten chicken sandwich, potatoes, a chocolate muffin, and to the side, apple juice.

“Oh my gosh, he did me dirty,” Schickel said. “Definitely not the healthiest of meals I’ve ever eaten. I’m sure our nutritionist would not have liked it. After a win, you gotta treat yourself.”

However, Godlevske rarely takes to roasting his players on Twitter. In fact, the opposite tends to be the case, with the seniors grilling his dad-like tweeting tendencies — “he’s trying to stay young,” as Jennings puts it.

After the team ousted No. 21 Villanova and Georgetown on a three-day road trip from Washington D.C. to Philadelphia last season, Godlevske posted a hashtag: #roadsweep. The players got a kick out of that one. Laughed at him, not with him.

This season, road wins have been easier to come by — with a road record of 7-4 compared to the 6-8 record of last year.

Naturally, Godlevske fell behind, forgetting to tweet the hashtag on more than one occasion. Noticing the tweet absent from his timeline, Weaver and Jennings poked fun at their coach.

Another time, Godlevske retweeted a tweet from Butler athletics, which congratulated him on his nomination for Big East Coach of the Year.

Halfway through the interview in the steamy locker room, Schickel’s phone pinged: “He already retweeted it,” she said, smiling from ear-to-ear, referring to Whitney’s quote-tweet, which read:

Jennings flashed a grin and rolled her eyes, “I’m sure he did,” she said.

The last kind of fun strengthens the bond between the teammates. There was the #Toritracker when Schickel was marching toward the Butler all-time rebounding record.

Spolyar and Jennings have developed a “goofy” relationship as Jennings puts it, as well as calling her the “biggest character you’d ever meet.” Leaving behind 11 undergraduates, Jennings and the rest of the senior class will cherish the countless memories.

“It’s going to be weird not being part of a team because I’ve been part of a team my entire life,” Jennings said. “To go to a locker room every day, you always have common things to talk about, to joke and laugh about.”

Schickel said: “We’ve all gotten very close. Usually with so many people spending this much time together, there’s something wrong, but this year has truly been a blessing.”

During their sophomore season, after every loss, Schickel and Weaver — roommates of four years — knelt in their living room, crying together.

Weaver remembers her thoughts: “What are we even doing? This is horrible. I don’t know what we’re doing wrong. We gave all our effort, we just weren’t as good as the other team.”

Once their eyes dried, the two agreed: this is rock bottom.

“I believe we only got two wins in the Big East, which is really rough,” Schickel said, her voice fading like she was revealing a deep secret. “And I think at that point, we said this is it.”

Once they realized that feeling bad for themselves was only going to get them so far, Weaver offered words of encouragement and motivation: “We can’t just give up. We have to keep pushing through it.”

Growing accustomed to losing so often was a grueling process. In their past were decorated Indiana high school careers. Weaver won a sectional championship her junior season, Schickel won two state championships and Jennings was crowned Miss Basketball her senior season.

“Whitney and Tori can attest to this: going from your high school teams, where you’re really good, hardly ever lost any games, to Butler where we did nothing to lose games, made it hard to transition,” Weaver said. “This season, our hard work and perseverance have paid off.”

They could have transferred. Could have taken the easy way out. So many do. They didn’t.

Godlevske recalls a particular moment when the seniors hit their reflection point, back in their sophomore season, when they lost to Villanova in overtime, 70-69, on Jan. 20.

A 20-point lead and a 43-29 score at the end of three frames evaporated. With two seconds to go in the game and Butler up 59-56, the Bulldogs fouled Alex Louin in the act of shooting a 3-pointer. They were trying to intentionally foul. They failed. Forget blaming the refs, this was their fault.

“You still gotta make plays,” Godlevske said. “We had opportunities down the stretch and we missed a couple free-throws.”

No words would mend the wounds, Godlevske knew. He was speechless. The girls waited for an answer, as their eyes brimmed with tears.

Finally, he told them: “We’re going to be alright. You just keep working hard. Our time is going to come. I believe in you guys.”

They went on to lose their next ten games, including seven by ten or fewer points.

Schickel said: “After our sophomore season, we were motivated to turn things around. We realized if wanted things to change, we had to something about it.”

Through the trials of losing tight games arose a turning point for the senior class.

“We had all cried, but we finally took that step forward,” Schickel said.

Schickel keys in on the moment Weaver hit a game-winning jumper from the elbow to lift them over Xavier in the first round of the Big East Tournament two seasons ago, giving them their first win in 11 games.

“The win over Xavier was huge. It made a lot of things worth it,” Schickel said.

And there’s potential for more. The Big East Tournament, and maybe a postseason tournament — be it NCAA or NIT.

But no matter what happens, Godlevske is proud of his seniors.

“If they don’t make the field, it doesn’t mean they’re not top 50 or 60 in the country,” he said. “No way does that take away from what they’ve done.”