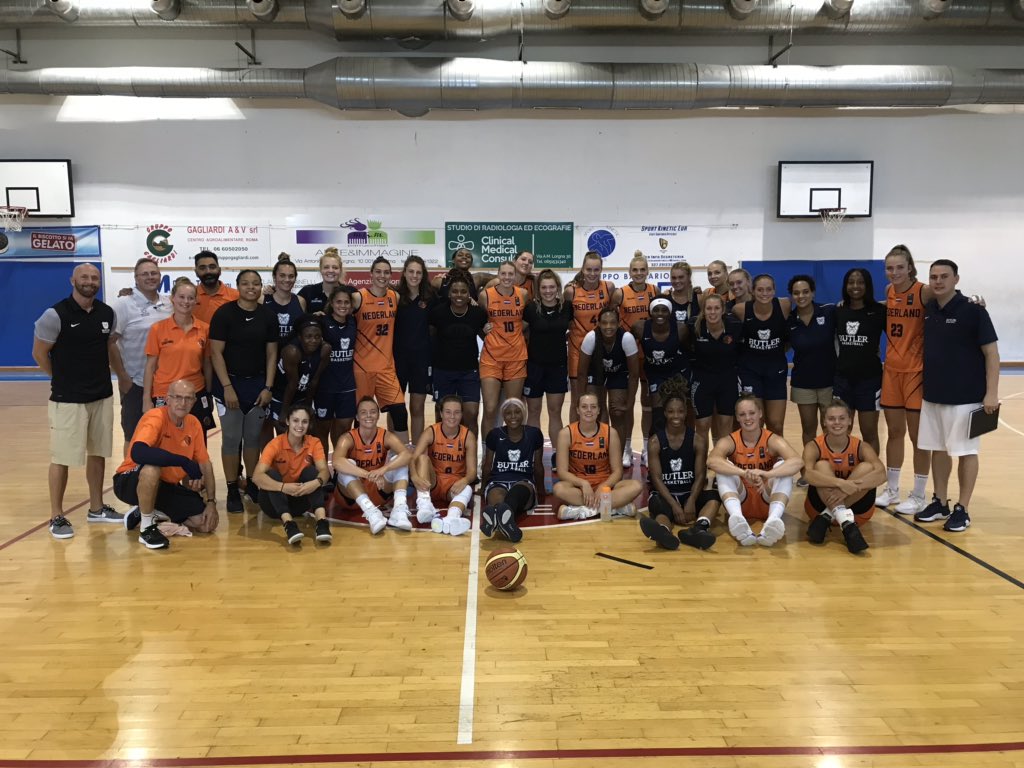 Going into halftime, the Butler women’s basketball team was down big to the Florence All-Stars.

It was the fifth of nine days on the team’s Italian summer tour and the second of three games against professional competition. In the first game against the Dutch National Team, the Bulldogs lost by 30.

Defensively, help defenders were seconds too late on their rotations, while offensively, players were searching for their own shot and not an extra pass.

Butler responded with a win. A light bulb clicked.

“I think everyone bought into that and it really didn’t matter who scored, we ended up sharing the ball really well and people were shooting the ball well,” Brey said. “All the coaches pitched in and said what they were seeing.”

The Bulldogs followed their victory against Florence with a convincing 90-48 win against Venice in the final game of the trip.

“I think we have the ability to be as good or even better than what we were last year,” Godlevske said. “We’ll see though, we’ve got a lot of work to do.”

There are going to be bumps in the road like the game against Florence. That’s because this team is no longer ruled by a strong senior class.

Tori Schickel graduated as the all-time leading rebounder in Butler history, and last season, Michelle Weaver was seventh in the NCAA in steals while Whitney Jennings led the team in scoring.

All three of those graduated seniors played a tremendous role in building the program from 16 total wins their first two years to a 23-10 record last season. The Bulldogs received a bid to the Women’s National Invitation Tournament, where they lost in the third round.

The seniors will prove difficult, if not impossible, to replace. Current senior Shae Brey is one of the players tasked with an increased leadership role this season.

“It was a lot different last year, being a role player,” Brey said. “I feel like this year, I have to take a big step up, be the leader on the team.”

There is an adjustment period because Butler lost last season’s star-power.

With 52% of the scoring gone in Jennings, Schickel and Weaver, the offense demands change out of necessity. On the first day of practice Godlevske introduced a new offense — a motion offense — but in the six weeks of practicing it, it was never tested in game action. Italy provided a litmus test.

“Offensively, it’s all completely different,” Godlevske said. “It’s all about us winning the paint through the dribble and then having people spot-up off that. We’ve got to be able to win the paint through our perimeter players.”

Depth replaced the star-power in this year’s scheme.

The newcomers performed better than expected, but come season time, minutes might not be so plentiful. Five players were sidelined in Italy, four of whom are expected to be rotation players: leading returning scorer senior Kristen Spolyar, senior Katherine Strong, junior transfer Jaia Alexander, and redshirt junior Naira Caceres. Sophomore Jamilyn Robinson also did not play.

Despite the depth of this year’s roster, Godlevske understands that it will take time for chemistry to develop.

“It’s just going to take us continuing to grow and continuing to learn more about each other, and that’s what really good teams are about: togetherness,” he said.

In order to form chemistry, the team boated around Venice in a gondola, listened to an opera singer’s baritone voice, toured the colosseum, and of course, took touristy pictures at the leaning tower of Pisa.

The Dawgs were able to visit Pisa today #Dawgsin🇮🇹 pic.twitter.com/nQXgzaSeWF

The team enjoyed dinner together in each city, where the final and most important activity took place. Godlevske asked the team three questions — two serious, one goofy.

They typed the answer onto their phones and at the nightly team dinners, those were read aloud.

@ButlerUWBB round 2 of interviewing your roommate and presenting their findings. #dawgsin 🇮🇹 grow and learn! pic.twitter.com/u9tJ9hejxV

Godlevske recalls the typical conversation: “Man, pizza, really? And then at dinner, it brought up conversations from other people. How can you say eggs? Yeah, I know you can cook eggs a lot of different ways, but did you think about this?”

He saved the best for last: “What do you think that we can accomplish next year and what’s it going to take to accomplish that?”

Every player wrote down winning the Big East regular-season championship and tournament championship.