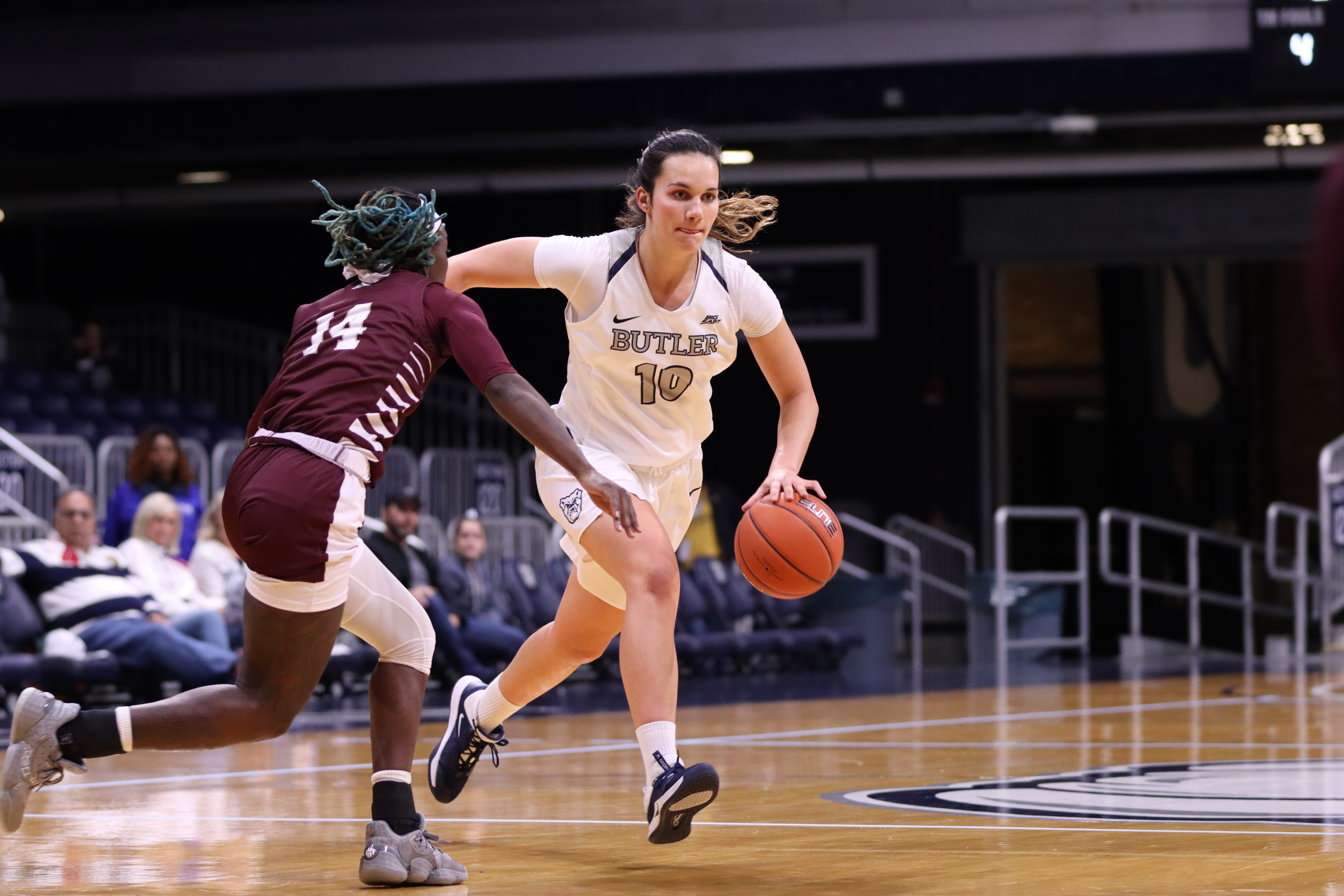 Naira Caceres in action during Butler’s win over Eastern Kentucky on Nov. 17. The Butler women’s basketball team will take on IUPUI and Ball State this week. Photo by Chandler Hart / Butler Collegian.

IUPUI is hosting the House of Champions Invitational, which will take place in the IUPUI Natatorium. Some of the other schools competing are UIndy, Western Illinois and Cincinnati. The event will start at 10 a.m. and can be seen on ESPN 3.

The volleyball team will take on Xavier this weekend in their last games of the season before the Big East tournament. The Bulldogs are now 9-7 in conference play after finishing 1-1 this past weekend. The Bulldogs beat Providence 3-0 and then lost to Creighton 3-0. Xavier is 8-8 in Big East play and coming off a 3-1 win over Providence. When the Bulldogs faced the Musketeers last season, Butler lost 3-1 and 3-0. First serve will be at 7 p.m. and you can catch all the action on BEDN.

Men’s basketball is off to a 4-0 start after an 80-61 victory over Wofford. The Bulldogs will host Morehead State in their last home game before they hit the road over the Thanksgiving holiday. Morehead State is also 4-0 and will take on Missouri before making it to Hinkle Fieldhouse. Tipoff will be at 7:00 p.m. The game will be broadcast on FS1.

Women’s swimming will compete in day two at the House of Champions Invitational. The event will start up again at 10 a.m. in the IUPUI Natatorium. Day two will also be available on ESPN 3.

Neither the women’s or men’s teams qualified for the NCAA championships. But the men’s team has two individuals that qualified, including Simon Bedard and Euan Makepeace. From the women’s team, Emily Royston qualified. The NCAA Championships will be taking place in Terre Haute, Indiana, at the Lavern Gibson Championship Course. The women’s race will begin at 11:15 a.m. followed by the men’s race at 12:15 p.m.

The women’s basketball team will travel across the state to take on Ball State in their first away game of the season. Butler beat Ball State 64-47 last season. Ball State is currently 1-2 and will face Xavier before hosting Butler. Ball State has losses against IUPUI and Cincinnati so far this season. Game time is set for 1:00 p.m.

The football team will play in their last game of the season at Dayton. The Bulldogs are now 2-5 in conference play and 3-8 overall after a 24-21 win against Valparaiso. Dayton is on a three-game winning streak and is 5-2 in conference and 7-3 overall. The Bulldogs lost to the flyers 38-28 last season. Kickoff will be at 1:00 p.m.

The volleyball team will take on Xavier at home in the last game of the regular season. The senior day matchup will start at 6 p.m. and be available on YouTube.

The women’s swimming team will conclude their fall season with day three at the House of Champions. Day three will also begin at 10 a.m. and be available on ESPN 3. The team will start back up again in January for their winter training trip.