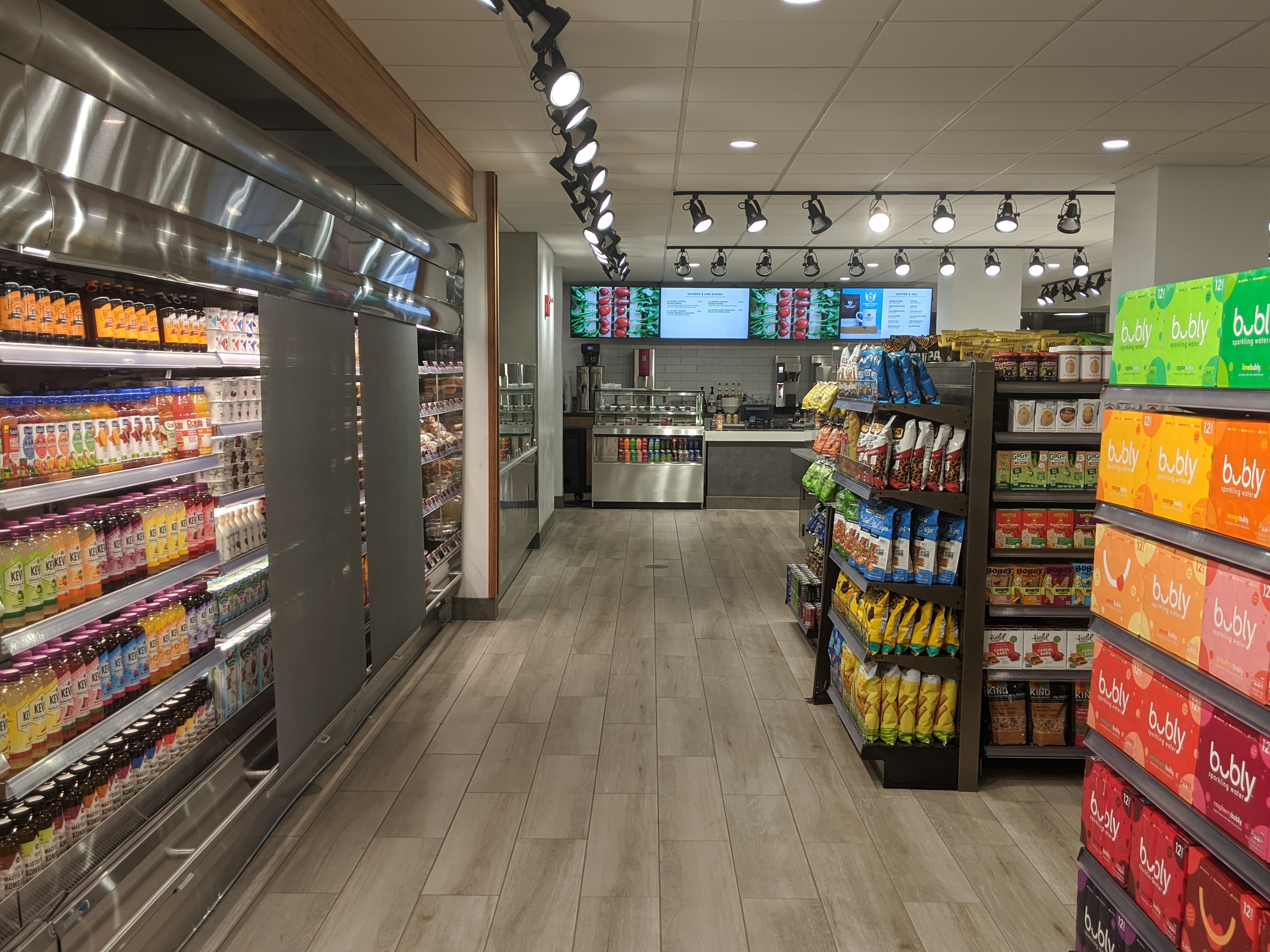 Students react to the opening of Plum Market. Photo by Meghan Stratton.

After delays, Plum Market, the long-awaited and newly-named C-Club replacement in Atherton Union, opened on Monday.

Within the first 48 hours after the opening of Plum Market, there have been mixed reviews. One student even started a Go Fund Me page to bring C-Club back.

The price of items has been one of the biggest concerns for the Butler student body. For example, a single jar of Justin’s Classic Almond Butter costs $18.29 and one package of four sticks of Organic Valley salted butter is marketed at $14.99. The prepared salad bar costs $9.99 per pound. In comparison, at Kroger, Justin’s Classic Almond Butter costs $10.49. At Fresh Thyme, Organic Valley salted butter costs $6.99.  At the Whole Foods Market on 86th Street, the salad bar costs $8.99 per pound.

Connor White, a sophomore Spanish and international studies major, was first happy with the renovations but was ultimately upset with the experience as a whole.

“It’s so expensive,” White said. “When it comes to my college cafeteria substitute, I want Doritos, Poptarts and candy. Right now I’m here and I’m eating rabbit food, and it’s costing me $15 a bite.”

Why you gotta double the prices on us like that? Not cool, give me the old c club any day

“I think about how Butler University has put out so many statements and have had so many on-campus BCR events and advocacy organizations come in and talk about food deserts, or inability to have access to healthy and nourishing food at an affordable price,” Khayat said. “Indy is one of the largest food deserts in the midwest, and Butler University has been a big voice on that front of trying to change that.”

This made it all the more confusing when she visited Plum Market.

“For me as a student, it is frustrating to hear our university have such a loud voice about this topic but then bring in Plum Market, which with their prices is doing the exact same thing to contribute to those food deserts,” Khayat said.

Plum market at c-club comes off as the most unwelcoming location on campus. Where is the plum purple??? Why is everything white???? Where are my nuggets?????????

Simmons took the salad home, and when she dumped the salad on her plate, she saw a bug crawl out from under the lettuce.

She dug around her salad a bit more, then saw a dead bug on a lettuce leaf.

“I was so grossed out, I was like, “I don’t want to keep looking in the salad,’” Simmons said. “And then I promptly threw it away.”

Simmons took a picture of both bugs and a video of the live bug to show it moving around on her plate. She tweeted both pictures in a reply to Butler SGA’s tweet about Plum Market’s opening.

She said Butler seemed to be “cursed” with bugs, referring to the maggots found in Atherton Union’s broccoli last year, and that it seems to be a problem with produce.

The packaged salads are made by Bon Appetit.

Joe Graves, general manager of Butler Bon Appetit, said in an emailed comment to the Butler Collegian that the lettuce from Simmons’ specific salad came from their local produce supplier as a three-pack of Certified Organic romaine hearts.

“Unfortunately, as disconcerting as the student may have found this, lettuce and other produce does come from a farm,” Graves said in his emailed response. “And farms do have insects — organic farms perhaps more than others.”

Organic farms, as certified by the USDA, do not use pesticides.

Bon Appetit employees then cut, washes and dries the lettuce in an electric-salad spinner.

“We will be reporting this to our supplier, and we will be revisiting our produce washing protocol with our staff to make sure that we are following our food-handling standards to lower the chances of such an unpleasant incident happening again,” Graves said in his emailed response.

Graves said Bon Appetit welcomes open communication and direct feedback to improve Butler dining services. If somebody immediately brings a problem to the floor manager’s attention, there are several options to pursue which include replacing the meal, investigating and discarding the suspect item if necessary, reporting the problem to the supplier, and conducting additional staff training.

Students can also submit “less urgent feedback” through Bon Appetit’s online comment form or contact Graves by phone at 317-940-9702 or by email at joe.graves@cafebonappetit.com. Feedback via social media @bonappetitbutler is also welcome but may not reach Graves as quickly.

The atmosphere of Plum Market, however, has been a positive for Geralyn Miller, a senior actuarial science major.

“It’s really nice down there,” Miller said. “I got a chipotle burrito, but a lot of things seem overpriced, as many people have said. I would say there’s a lot more healthy food than there used to be in C-Club, so that’s nice.”

Goods sold in Plum Market have no additives or preservatives, and there are many options for vegan, vegetarian and gluten-free students.

Sydney Brown, a first-year dance major who is gluten free, enjoyed seeing a variety of different products in Plum Market.

“I really like it because there’s usually not as many healthy options with Butler Dining, and so this creates a place to buy healthier things,” Brown said. “The only issue I have is how expensive it is, but it’s better than having to pay money elsewhere, since we already have the flex dollars to spend.”

“I am a pretty big fan of the new Plum Market because of how many new options it offers,” Leonard said. “I am always craving some healthy alternatives and it offers so many.”

The drip coffee is by far the best thing. Might just go there for that

Although both Atherton and ResCo dining halls have become more accommodating to dietary restrictions since the adoption of new food provider Bon Appetit, they usually just have a small selection. Leonard was pleased with large amount of options available.

“I think people with dietary restrictions will be very happy with the renovations,” Leonard said. “I do agree with many of my friends that the market is overpriced, but it’s definitely a step in the right direction.”

Who has your heart?