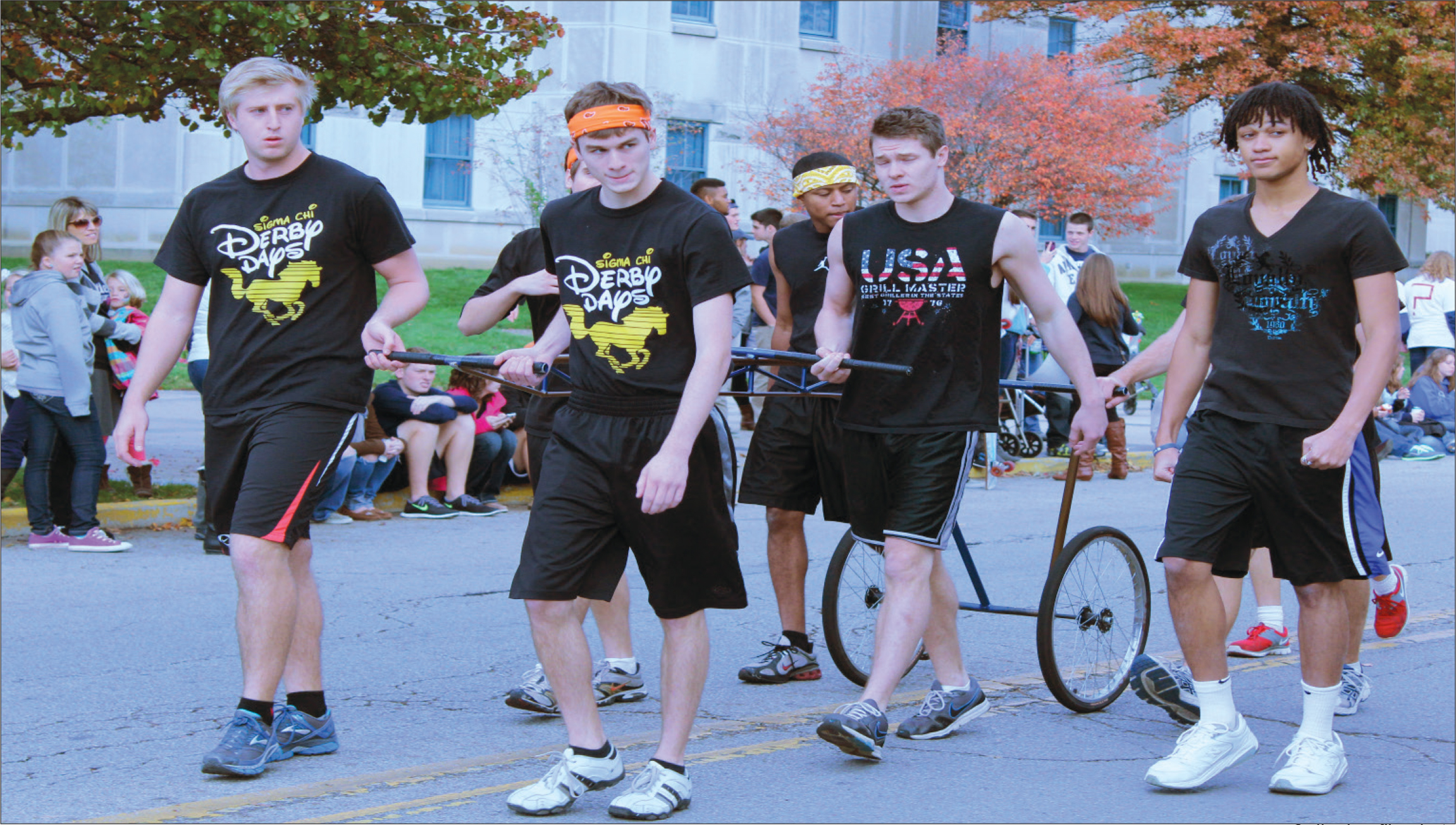 Butler’s 2019 Homecoming will see the return of a longstanding tradition: the Sigma Chi Chariot Races. Butler administration cancelled the races in 2018 due to Sigma Chi’s probation and safety concerns. This year’s races will take place along Hampton Drive on Oct. 26 at 9 a.m.

The chariot races started in the 1940’s and consist of teams from Greek fraternities pulling homemade chariots down Hampton Drive. Sigma Chi has hosted the event since 2005, and it was expanded to include all fraternities in 2009. Hosting the chariot races involves funding the event, closing the street, working with BUPD to coordinate safety measures and organizing the individual races.

When Butler puts an organization on probation, that organization is not allowed to host events, which meant Sigma Chi was prohibited from holding the 2018 chariot races.

Jude Phillips, a junior pharmacy student and current president of Sigma Chi, said the chariot races were one of the hardest things to lose in the probation.

“When that happened, our house felt really disappointed in ourselves,” Phillips said. “And we felt like we let a lot of people down on campus, since it was a big tradition.”

Butler’s administration told Sigma Chi the 2018 chariot races were cancelled in a conduct letter. Phi Delta Theta then formally proposed to host the event, but dean of students Sally Click said the administration wanted to “press pause” on the event and conduct a risk evaluation.

The evaluation involved the group of fraternity leaders working with Butler’s risk management department to put together an event proposal to address the event’s potential liabilities. Click said addressing the risks in a proactive way can help to reduce or mitigate them.

Ryan Barrett, chariot race chairman and vice president of recruitment for Butler’s Interfraternity Council, said that in the beginning, the university seemed to be against the event.

“They did possibly use an excuse of [Sigma Chi] being on probation to kind of say, ‘hey, we’re done with this for now, restart,’” Barrett said. “It may have been, but it was also probably the best time they could have done it.”

Barrett said that for years, the event organization and funding went on behind closed doors between the Sigma Chi advisor and a university Greek life official. He called the process a “handshake agreement” that was not locked in.

Phillips said he thinks one of the reasons the administration wanted to cancel the 2018 races was to get involved with the event and understand the planning process.

After the event was cancelled, several fraternity leaders began to make plans as to how to change the event for Homecoming 2019. However, Sigma Chi’s probation is currently set to last until December 2019. Sigma Chi will appeal to end their probation after fall break, Oct. 17-20.

Phillips said this year’s races will still happen regardless of if the administration approves the appeal or not.

Click said the decision to plan for this event, like all other homecoming events, had to be made in advance. The administration could make separate decisions about chapter-related matters.

“They have good leadership,” Click said. “And if you’ve talked to Jude, he’s really working hard — and the effort is noticed. I think they are sincerely wanting to make some positive changes.”

Over the 2019 spring semester and summer, a group of fraternity leaders worked to adjust the event to fit the university’s requirements. They used past chariot races documents and the university’s risk management documents to add new regulations. The group then submitted a timeline of race protocols and a list of rules to the administration.

Luke Rihm, president of the IFC and 2018-19 president of Phi Delta Theta, said most of the new rules are straightforward.

“What happened was we, IFC, ended up coordinating a group of fraternity leaders to write a new procedures and policies document to adhere to some new standards,” Rihm said.

Additionally, the chariot races are not on Butler’s official homecoming schedule, as they have been in years past. Phillips said the event is not sponsored by Butler, and that Sigma Chi has taken on the event’s liability and marketing.

One of the most expensive aspects of hosting the chariot races is paying for insurance coverage in the event that something goes wrong. Previously, the administration and Sigma Chi would split the costs of insurance. However, Phillips said the administration mandated that Sigma Chi insures the entire event this year.

One initial plan was to split the insurance costs between all five fraternities, but that proposal was rejected because it is difficult to decipher which organization would be sued in the case of a lawsuit.

Rihm said the split liability proposal was rejected toward the end of the summer. The group then had about two weeks to come up with an entirely new proposal.

“The things we tried to branch out on ultimately didn’t pan out,” Rihm said. “So we relied pretty heavily on previous documents and just fixed line items. That’s the best we could do on the time crunch.”

One new safety requirement outlined in the proposal is that all race participants need to wear helmets. Additionally, Phillips said Sigma Chi will provide race training for any fraternities who may need it.

The road barriers along Hampton Drive will change for this year’s event as well. In 2017, there was orange fencing along both sides to keep spectators off the road. However, to reduce costs this year, there will be a rope barrier with executive members from Sigma Chi and Phi Delta Theta enforcing it.

Even with the new changes, Rihm and Phillips both said the event will feel similar to the 2017 races.

“Well, as much work as we did on it, it’s going to look remarkably similar,” Rihm said.

“Honestly, having that year to figure out what went wrong and where the race needs to go, it feels like it’s at a much healthier spot,” Phillips said.