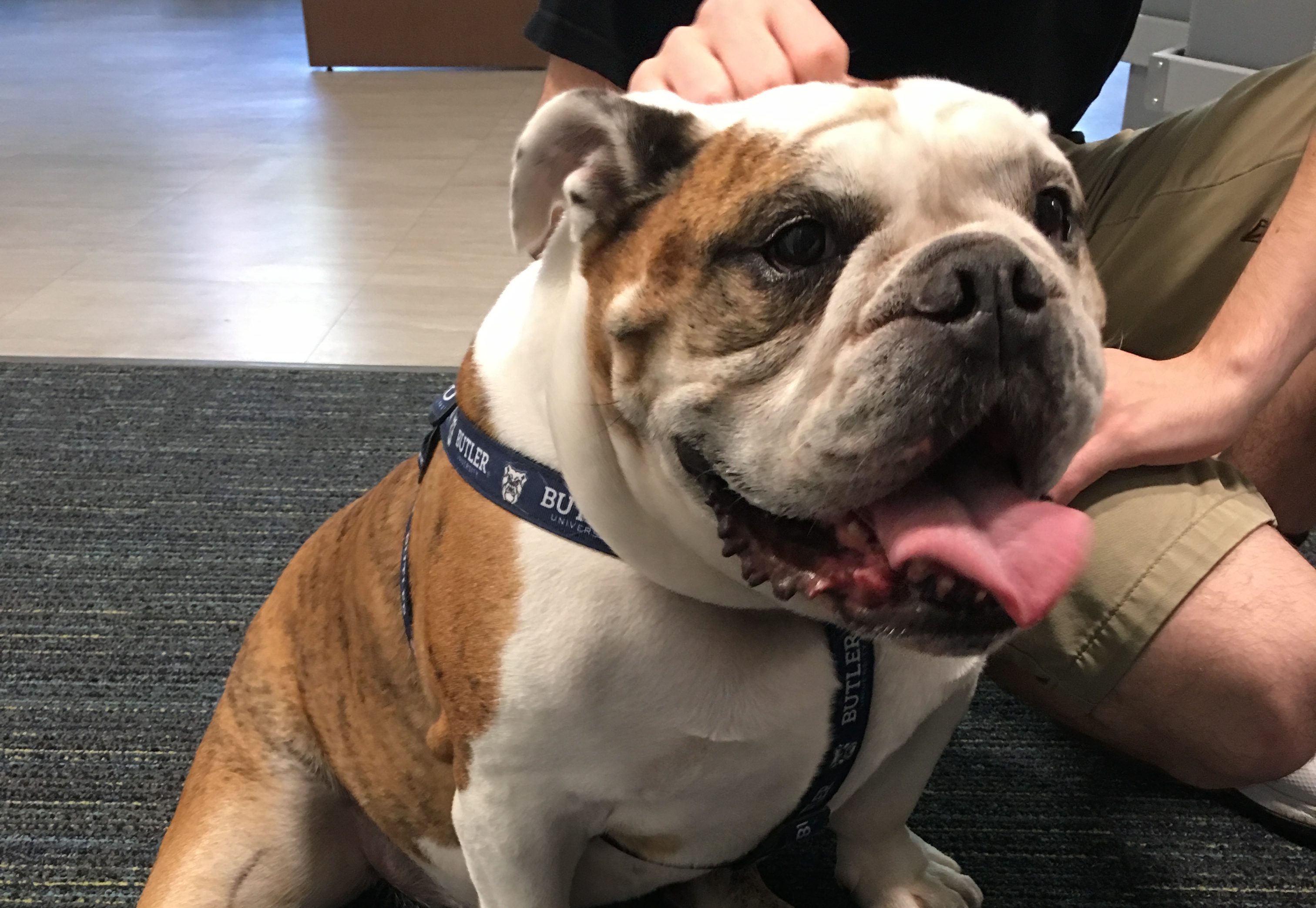 Michael Kaltenmark explained the scenario to me.

The Kaltenmark family was spending the afternoon at the swimming pool as a sad-faced Trip watched from the window, unable to join the fun. The next thing they knew, Trip was barrelling through the outdoor gate towards the water.

Perhaps realizing the depth, Trip skidded to a stop, but not in time to keep from sliding into the pool — see the attached gif.

Kaltenmark, director of external relations and caretaker of Butler University’s live English Bulldog mascot,  said this is just one story that illustrates how Trip never wants to miss out on the action.

“He does not want to be left at home,” Kaltenmark said. “He has a lot of joy and exuberance.”

Fortunately for Trip, he is not left at home often. I sat in shock as the caretaker explained Trip’s schedule to me.

Trip attends nearly every home basketball and football game, and tries to attend as many other athletic competitions as possible. Outside of sports, Trip also appears at events ranging from black tie dinners to picture book readings at local elementary schools.

Moreover, Butler Blue has a mission to visit 50 to 75 admitted students per year from October to March. More often than not, Trip will travel to the basketball team’s out of state games in key areas such as Chicago, Milwaukee, and Washington D.C. to visit with prospective students and give them a feel for Butler.

“We like to think of Butler Blue as more of an idea,” Kaltenmark said. “When people come in contact with him, they get a sense for Butler University so people can really touch and feel what Butler is like.”

Though I too was given this feel for Butler as a prospective student, I have not had much interaction since. Three semesters into my Butler experience, I had my first real interaction with Trip: writing this story. As I knelt, he scooted up close and I saw a joyful pup — panting hard with a contented look on his face — but one who bears the weight of the Butler Brand.

“When you think about the Butler Brand, you think about loyal, compassionate, collaborative, tenacious,” Kaltenmark said. “Trip is all those things, but I think you have to tack one more on to the list  — and that’s ‘spirited.’”

The brand carries responsibility, and most of all, a huge time commitment. One cannot help but wonder at what point the brand ends and the dog begins. If Butler Blue is the face of the university, how much time should he spend with currently enrolled Bulldogs?

Trip’s spirit should permeate campus, but instead his power stops short because of his limited presence. Instead of a best friend, Trip is more like a distant celebrity relative.

Moreover, to market Trip as a spirited representation of Butler seems like a false promise. As the face of the school, I imagined that he would routinely interact with students face-to-face. On those promises, Butler Blue III does not deliver. As sad as it is, Trip does not have time to be our best friend.

However, Kaltenmark and Trip alike enjoy their interactions with students and try to make them happen as often as possible. Though it is difficult in their busy schedules, Kaltenmark said Trip is often available in his office in Robertson Hall.

“He’s in Robertson Hall every day if students ever want to come see him,” Kaltenmark said. “Maybe they had a stressful exam and they need to let loose a little bit and get some dog love; he’s typically here.”

So if you are sad about not seeing Trip more, head on over to Robertson Hall suite 200. He may be too busy with a photoshoot or a tour group to hang out with stressed students — you might have more luck with Scooter in the Counseling Center — but it is worth a shot.

The pool story captures the essence of Trip as the Butler Brand: he has all paws in for everything, and he is charging through the gate ready to be part of the action — but he may have gotten himself in a little deeper than expected.