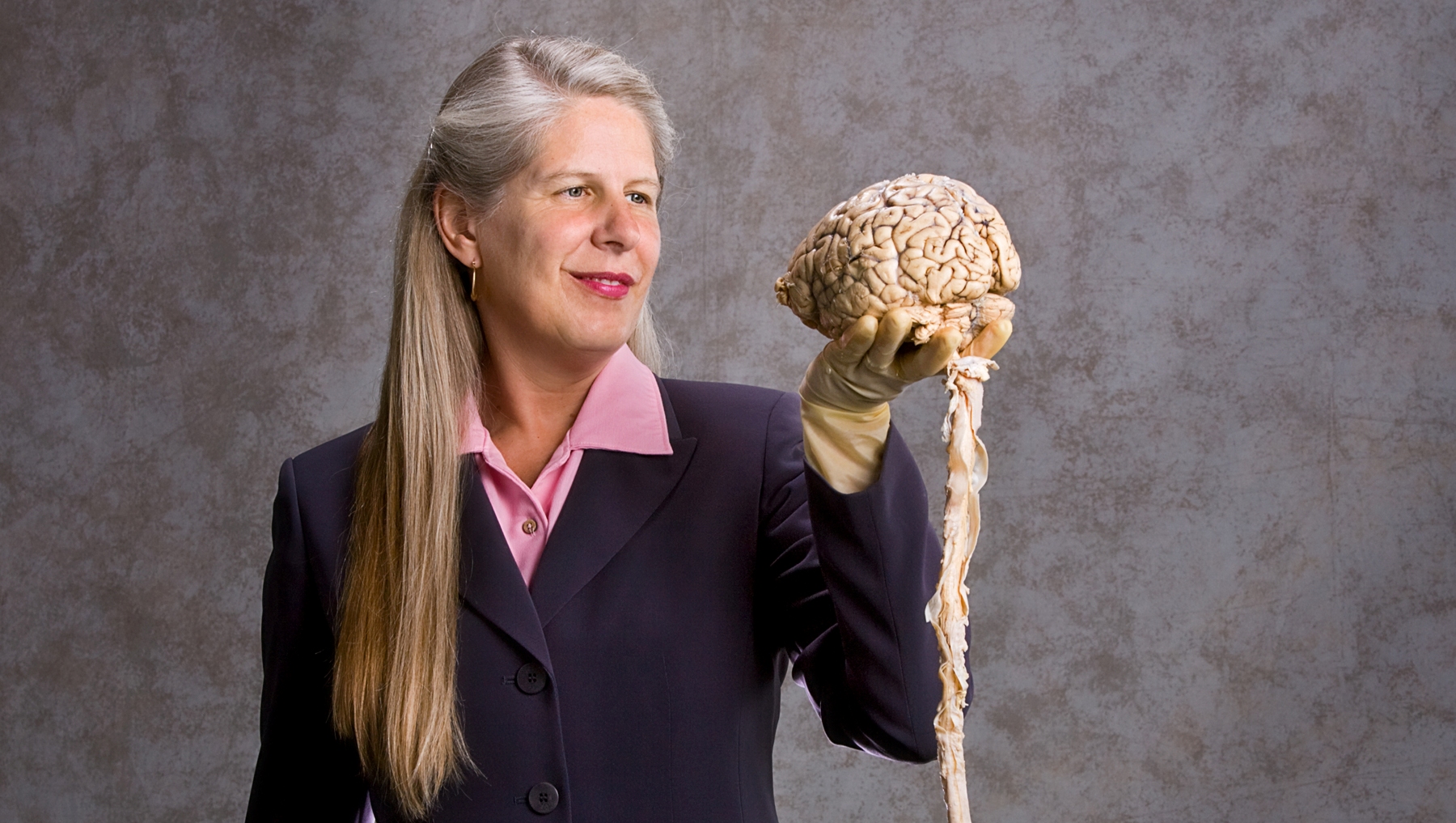 In the spring of 2017, 10 large and colorful fiberglass brain sculptures were displayed around campus as part of One Butler: The Brain Project. On April 4, the neuroanatomist who backed the yearlong, campus-wide initiative will be recognized by the state of Indiana for her contribution to brain wellness education, research and community involvement.

Jill Bolte Taylor will be presented the highest civilian honor in Indiana, the Sagamore of the Wabash, at Butler University on April 4. Governor Eric Holcomb will send a representative to award Taylor.

“I’m very touched,” Taylor said. “It’s a lovely reminder that what I’m doing in the world has value and that people are cheering me on.”

She is being honored for her service to Hoosiers as a neuroanatomist and for educating “vast numbers of laypeople about how the brain works and what happens when a person experiences a stroke or mental illness,” as described in her nomination letter submitted by Taylor’s colleagues at Butler.

Taylor is a Terre Haute native, Indiana University alumnae and currently lives in Bloomington. She said she recalls hearing about the Sagamore all her life, which made it a big surprise when she found out she will receive the honor.

While Taylor is not a member of Butler faculty, she was the spring commencement speaker in May 2016, which is when her relationship with the university began. She returned in September that year to give a lecture to a sold-out Clowes Memorial Hall, which kicked off a year-long lecture series on topics surrounding brain and mental health with different guest speakers.

“That was really the beginning of a long term relationship that allowed me to be able to bring my knowledge and enthusiasm to the Butler campus,” Taylor said. “I feel a strong connection to the Butler population and I know it’s just the kind of collaboration that I know will continue to grow in a really positive way.”

In April 2017, Taylor commissioned the large brain sculptures that were placed around campus as part of the One Butler: The Brain Project. Over 40,000 people came to campus to see the art display, which highlighted different neuroscience themes like addiction, creativity, mental health and sports wellness.

While studying to be a neuroanatomist at Harvard University in 1996, Taylor experienced a severe stroke at the age of 37. She spent the next eight years recovering and researching her neurological trauma, as documented in her New York Times bestseller “My Stroke of Insight: A Brain Scientist’s Personal Journey.”

Her TED talk, titled “My stroke of insight,” is now one of the top five most watched TED talks of all time, with over 24 million YouTube views. Taylor was chosen as one of TIME Magazine’s 100 Most Influential People in the World for 2008 and has been the premiere guest on Oprah Winfrey’s Soul Series webcast. Taylor is also involved in the development of the upcoming feature film about her life, to be directed by Ron Howard.

“People like me, who do what we do to be of service to humanity, do what we do because we have to do it,” Taylor said. “I’m going to continue what I do with or without the accolade along the way. But it’s always lovely when people get together and they honor the work that you have done.”

Susan Kleinman, director of strategic initiatives in the College of Education, and education professor Catherine Pangan both worked with Taylor during her time at Butler in 2016 and 2017.

“There were several people, after she spoke, that described their challenges with their depression or mental illness or anxiety who would never have shared that in a public way,” Kleinman said. “All of that was her doing.”

Taylor’s message is being carried on with alumni too, Kleinman said. Several former education students who worked with Taylor on The Brain Project have since brought neuroscience and anatomy of the brain into their elementary school classrooms after graduating from Butler.

“We feel like Dr. Jill had a huge impact on the general culture of the campus,” Pangan said. “She’s really been an inspiration to a lot of people in this community.”

Ena Shelley, dean of the College of Education, wanted to bring Taylor to campus for the 2016-17 school year in order to put forth more neuroscience initiatives.

“[Shelley] really spearheaded it out of the College of Ed but did it for the benefit of the entire university,” Pangan said.

Taylor’s nomination for the Sagamore of the Wabash was sent in by Ena Shelley, Susan Kleinman and other Butler faculty.

“We’re just totally honored to be able to partner with the governor in giving the highest civilian award that he hands out to someone who we consider to be our friend as well as an inspiration to so many millions of people around the world,” Kleinman said.

The Sagamore of the Wabash award ceremony will take place at 4:30 p.m. tomorrow in Shelton Auditorium at South Campus.

“My heart is filled with gratitude for the people who went to bat for me to receive this award,” Taylor said. “I anticipate a very long and healthy ongoing, project-based relationship with the Butler community.”