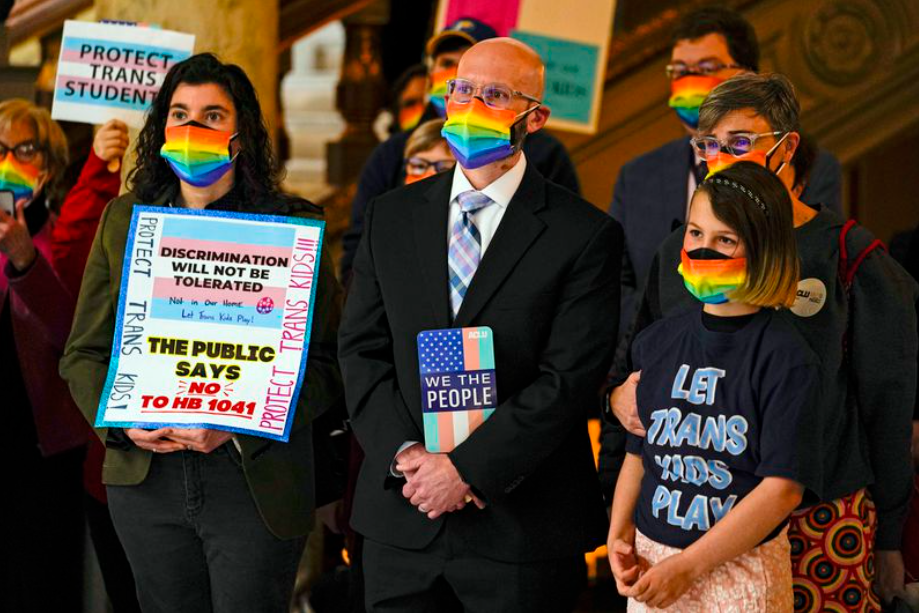 Hoosiers protest the passing of House Bill 1041 at the Indiana State house in Indianapolis in February. Photo courtesy of AP Photo/Michael Conroy.

On March 21, Indiana Gov. Eric Holcomb used his veto power for the second time this legislative session on House Enrolled Act 1041. This act, formally known as HB 1041, would have banned transgender girls in grades K-12 from participating on sports teams of the gender they identify themselves in public schools.

In a letter to Speaker of the House Todd Huston, Holcomb describes three ways in which this bill falls short of creating a “consistent state policy regarding the fairness in K-12 sports in Indiana.”

Those ways are: lack of clear procedural guidelines, failure to address previous lawsuits in states with similar laws in place and lack of necessity for the bill in the first place.

Holcomb begins his letter by addressing how difficult it would be to implement and maintain a fair policy on transgender athletes in all public schools across Indiana in different districts. This concern was also raised by the Indiana High School Athletic Association — IHSAA — which currently has a policy in place for transgender girls wishing to compete on women’s sports teams.

The current process that transgender athletes go through is extensive. It requires numerous meetings and committees to assemble and discuss if the student has consistently presented their gender identity for at least a year. These committees base their decision off of documentation and personal testimonies from family, friends, the athlete’s school and their doctor.

Dr. Ann Savage, a critical communications professor and affiliate faculty member of race, gender and sexuality studies at Butler University, believes that the implementation of HEA 1041 in Indiana public schools would result in the exclusion of children based on their self-identification.

“I mean, I think the policy is draconian and to have a policy like that is invasive,” Savage said. “I think, you know, especially when we think about young children, it’s especially problematic, it’s not being inclusive and excluding people based on their identity.”

Additionally, Savage is skeptical of how the implementation of this policy in public schools would even take place.

After addressing the bill’s lack of procedural guidelines, Holcomb explains that HEA 1041 does not address the similar legislation passed in other states and how to deal with the lawsuits that would arise from it on the grounds that these types of laws violate equal protection for transgender youth.

Katie Blair, director of the Indiana advocacy and public policy for the American Civil Liberties Union, released a statement  on March 21 where she described the vetoing of this bill as a victory that “belongs to to the trans youth of Indiana, who deserve to live as their authentic selves and to play the sports they love, free from discrimination.”

Other individuals, however, are not fully satisfied.

Andre Hardy, a junior double major in criminology and sociology at Butler and president of the LGBTQ+ Alliance at Butler called the vetoing of HEA 1041 as a “win for the transgender community, specifically trans women and girls.”

However, Hardy also described his disappointment and frustration with Gov. Holcomb.

“I was extremely disappointed and frustrated by the letter because Gov. Holcomb did not address the blatant transphobia HB 1041 presents,” Hardy said in an email. “It seemed to me that he only vetoed the bill because it would reflect badly on his and Indiana’s reputation if he didn’t. Instead of being critical of the bill, he gives lighthearted, even sympathetic feedback which is unacceptable to me.”

Republican lawmakers currently have a supermajority in both chambers of the Statehouse. This means that when they meet again in May, Gov. Holcomb’s veto could be overridden and the bill will become law.

Hardy is well aware of this possible situation.

“If or when HB 1041 goes into effect, the rate of suicide, attempted suicide, depression and anxiety among transgender girls will drastically increase and continue to do so until the bill is removed,” Hardy said. “Additionally, more trans girls will be forced to stay in the closet and or choose between living life as their authentic selves and sports.”

In a 2019 study done by the Center for Disease Control in the United States, the amount of high schoolers who “seriously considered attempting suicide, made a suicide plan and attempted suicide” tripled in some cases for members of the LGBTQ+ community.

“When we start excluding trans folks on a federal level, you’re going to see this alienation trickle down socially,” Pilarz said. “Especially in those grade school spaces, that’s gonna be really harmful for young trans people who are already struggling with themselves to find an identity.  If we start excluding literal children they’re going to feel more isolated and feel the negative effects of that deeper than kids that can just play whatever sport they want.”

To close his letter, Gov. Holcomb brought up his worry and uncertainty on the lack of answers that the bill would bring. “Amidst the flurry of enthusiasm to protect the integrity and fairness of women’s sports in our state­ — a worthy cause for sure — this bill leaves too many unanswered questions such as those highlighted above.”

Throughout all three of Gov. Holcomb’s reasons explaining why he vetoed HEA 1041, he fails to address the violation of equal protection that HEA 1041 stands for.

The Equality Act prohibits discrimination against members of the LGBTQ+ community in areas such as “employment, housing, credit, jury service, and federally funded programs, such as those for health and education, as well as public places and spaces.”

Moreover, the act specifically prohibits discrimination in public accommodations and federally funded programs, such as public schools, which Gov. Holcomb failed to mention.