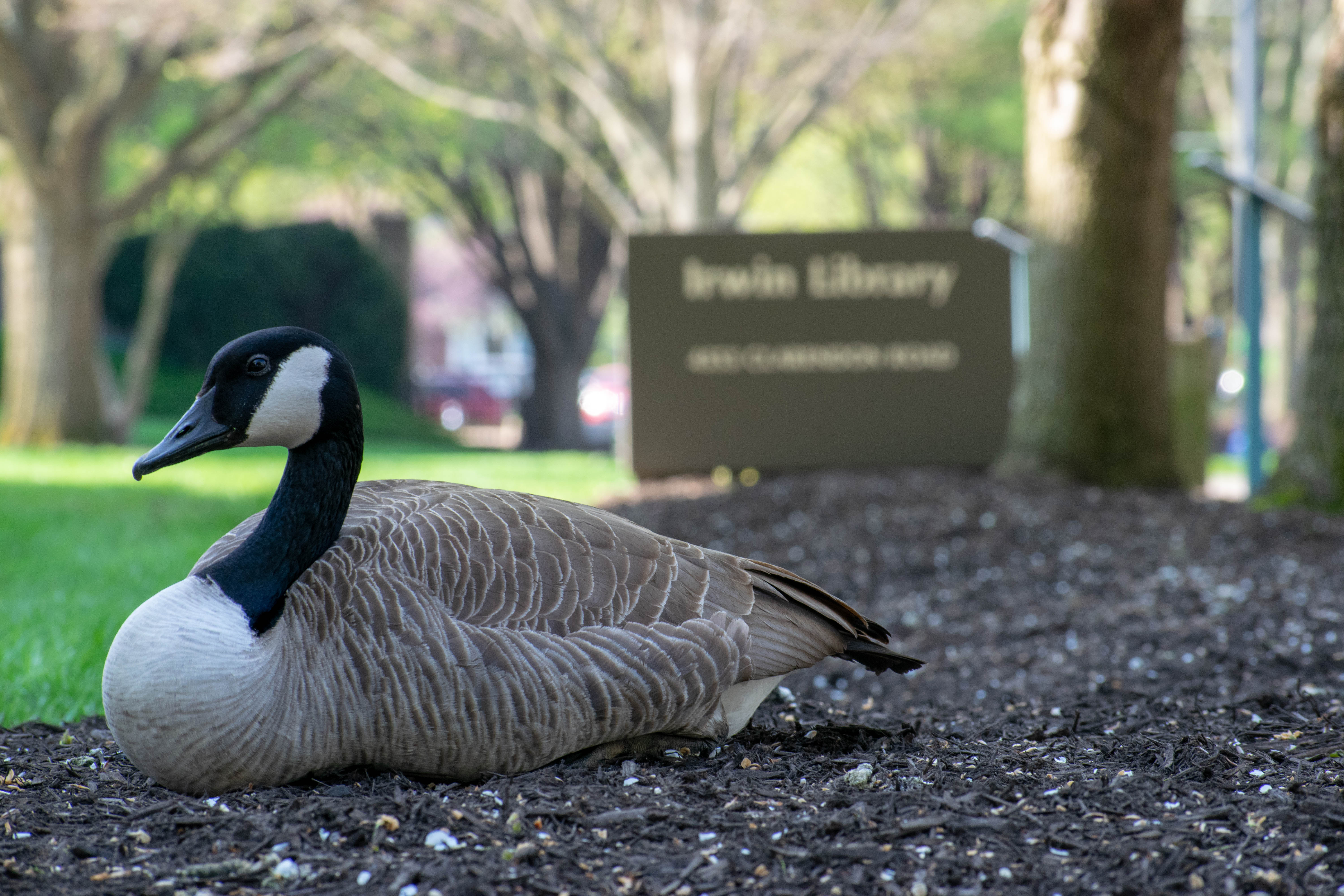 The geese are believed to be the same pair of geese as last year. Photo by Mason Lovett.

Protective mother or terrifying monster — either way, the goose is back. The Canada goose has once again made her nest on the second-floor ledge of Irwin library like last year.

Irwin has posted signs outside as well as on Instagram and Twitter to alert students of the geese. The mother goose, who is typically found sitting on her nest, is guarded by the father goose who likes to hang out in front of the entrance to Irwin.

Brandon Signorino, the administrative supervisor of Butler libraries, said it is difficult to prevent the geese from nesting because they are federally protected.

“There are a lot of legal things with the department of natural resources which prevent the movement of nests once there is an egg,” Signorino said. “We did ask the biology department and facilities to see if they had any way to prevent the nesting situation, but by the time they got out here to look, there was already an egg.”

Signorino said the library might try to prevent a similar occurrence next year. He said he believes it is the same pair of geese as last year.

“I think now that it has happened two years in a row we may have more of a precedent,” Signorino said.

Since the geese cannot be moved, students will have to pass them as they use the library.

Shannon Binkowski, a junior recording industry studies major, works at the Information Commons desk in the library. She had a run in with the father goose on her way to work the other week.

“It was raining, so I had my umbrella out, and the goose got all huge and started squawking and snapping its jaws,” Binkowski said. “I just pointed my umbrella at it, and he was like, ‘Oh never mind.’”

Irwin staff have not seen a difference in the number of students visiting the library, but students said they have mixed feelings about the geese.

Ellie Flowers, a first-year exploratory major, said she does not like geese because of her previous interactions with geese while living close to a river in Columbus, Ohio.

“There were geese all around the river, and those things were vicious,” Flowers said. “For that reason, I have a general distrust for geese.”

Ashley Ritzenthaler, a sophomore secondary special education major, said she does not mind the geese.

“They haven’t ever impacted me personally,” Ritzenthaler said. “I haven’t been hurt or affected by them, so I guess I’m pretty indifferent about them.”

Although they can be intimidating, Andrew Stoeher, an associate professor of biology, said the geese are not dangerous.

“They don’t have claws,” Stoeher said. “They don’t have teeth. They can’t actually bite very hard. They’ve got wings they can flap, but you’re really not in any danger of being injured.”

Stoeher said he believes the goose chose the ledge for her nest because it is protected from predators. When the goslings hatch they will have to jump down from the ledge — a two-story jump.

“It’s not very high, and when they have just hatched, they’re pretty bouncy,” Stoeher said.

The geese can survive the fall because they are light, he said. Their skeletons are not fully developed, so their bones don’t break. Last year, all of the goslings survived the jump.

After returning two years in a row, the mother goose and her family are staying on campus, whether students like it or not.