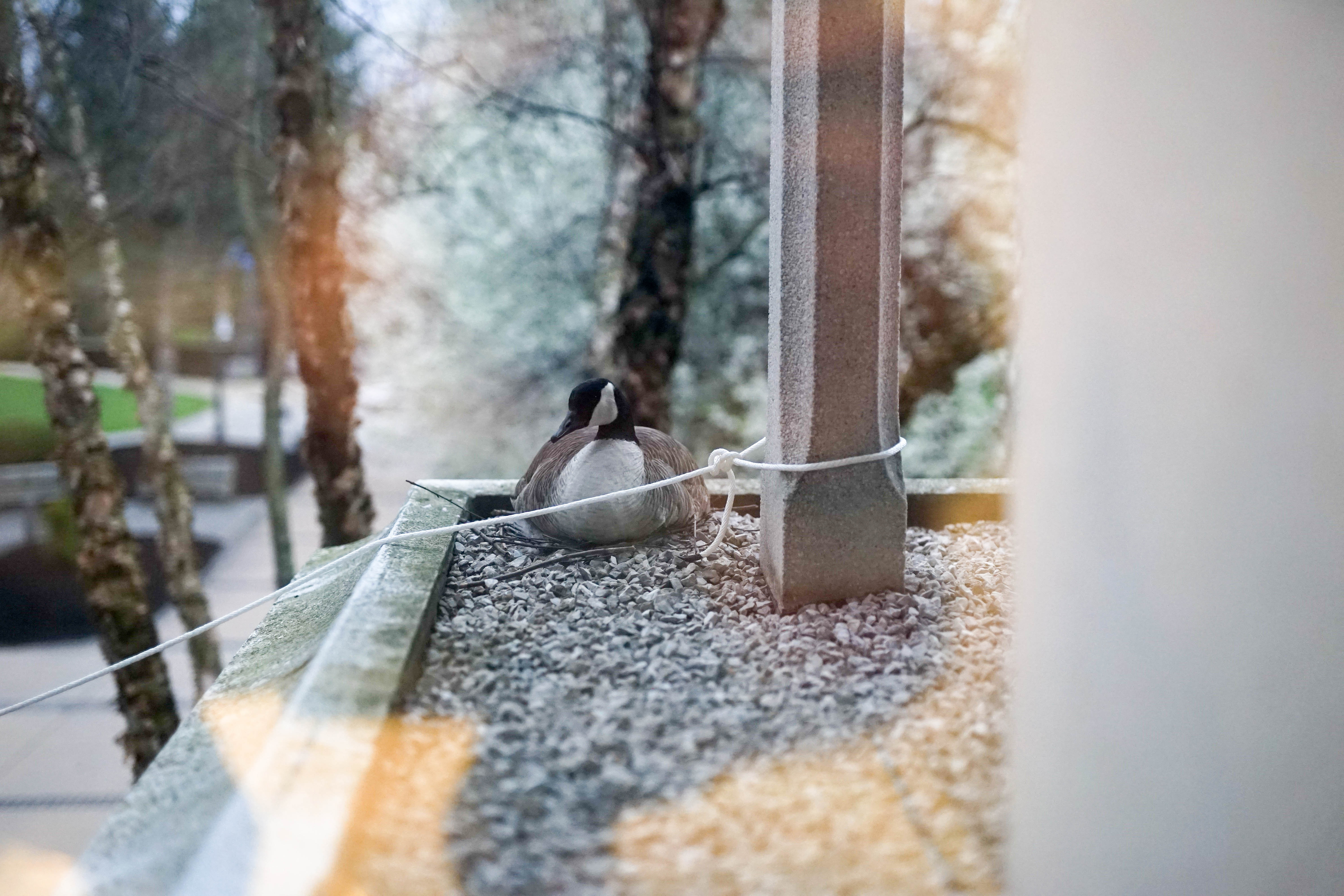 A mother goose has made her nest on the second floor ledge of Irwin Library. Photo by Adam Cvik.

Be-Honk-cé. Goosey McGooseface. Professor Plume. These are some of the names Butler students came up with when asked by the Butler Libraries Twitter page to name the goose that has been perched on Irwin Library’s second floor ledge in a nest of five eggs.

Irwin has been chosen to serve as a temporary goose nursery. You can find the momma and her nest on the 2nd floor above Irwin Library’s book drop. We are now accepting name recommendations. RT us with your best name. #geesewitherspoon pic.twitter.com/oABe0vwJLP

For the past few weeks, several geese have made Butler University their home. They can be found on the mall, on the fields, and yes, the second floor of Irwin.

Sophomore Spanish major Nikki Keller even had an incident with two geese while walking to Jordan Hall.

“I was walking over to Jordan for one of my classes in the afternoon,” Keller said, “and I came around the side of the library, and I didn’t see [the geese] at first. But all of the sudden, they were both on the middle of the sidewalk…I tried to go all the way around them and one of them saw me.”

She said one started raising its wings and flapped them, honking at her. The other flew over Keller’s head.

If she had to name the geese that chased her, she would name the one that flew over her head ‘Albert’ and the aggressive flapper ‘Lucifer,’ like the cat from Cinderella.

“He’s all jumpy and showy, but he doesn’t do anything,” Keller said.

Her friends even took a picture of some geese around Fairview and captioned it, “Thank you, BUPD, for the added security.”

Keller is fine with the geese for now, as long as there are a few of them. She is worried there will be a recurrence of what happened when she was in middle school, where a few geese turned into a whole flock.

Junior psychology and anthropology major Emily Stark said she is not bothered by the geese.

“I’ve heard people want the university to get rid of them, and I think that’s unnecessary,” Stark said. “They’re not hurting anyone, especially the mama goose nested at Irwin. At most, they’re a slight nuisance.”

Stark opted for the name of Geese Witherspoon, same as what the Butler Libraries voted for.

Butler director of facilities Gerald Carlson addressed the problem of the geese.

“If the geese are truly a nuisance,” Carlson said, “we will not remove them, but will seek assistance from an expert to help us, maybe someone from the [Department of Natural Resources].”

Carlson said after the eggs hatch, the small family will need to be removed from the ledge of Irwin.

“We will bring in an expert to gently do that,” Carlson said. “If they are a problem out on the play fields, we will encourage them to move to a new location. This time of year they can be destructive looking for bugs and grubs, etc., in the turf areas of campus.”

In a few weeks, the semester will be over, but until then, beware of the geese. Keller warns students not to feed the geese. And if a fluffy, gray feather floats into your venti iced coffee, blame Be-Honk-cé.