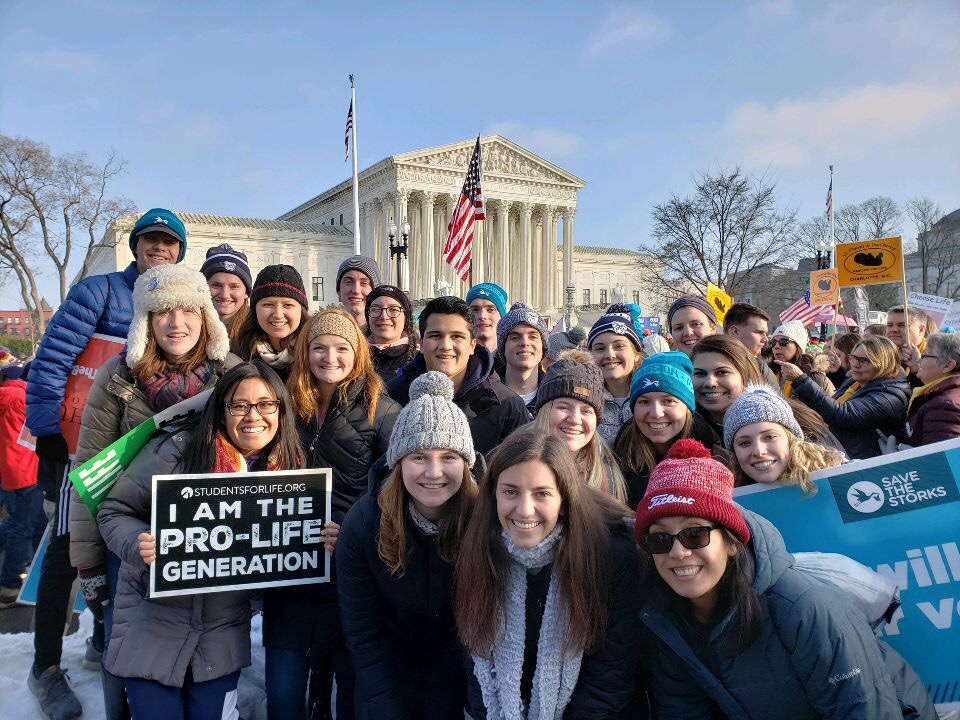 Butler students took to the streets of Washington, D.C. at the annual March for Life on Jan. 18. Twenty-one Butler students traveled with students from Indiana University-Bloomington and Marian University. About 150 students total took charter buses to show their support for the pro-life movement, the stance against abortions.

Students arrived on the morning of Jan. 18 and visited the Basilica of the National Shrine of the Immaculate Conception. After the service, students could listen to speakers or explore D.C.

Sarah Wede, a junior pharmacy major and vice president of Butler Bulldogs for Life, has attended the march for four consecutive years. She said every year she has felt an extremely loving atmosphere, and speakers have offered insight on how to approach the topic of abortion on campus and beyond.

“All the speakers are always saying people are going to disagree with you, but do not show them any hatred because that’s not what we’re about,” Wede said. “We should be sharing love and being able to express our opinions respectfully.”

Wede also said she would like to see more open conversations on campus.

“Often when this topic comes up it’s very heated,” Wede said. “That’s what we’re trying to change. We want to be able to talk about it and respectively hear both sides without being defiant.”

Junior biology major, Emily Weiler, attended the march for the first time this year. She is not a member of Butler Bulldogs for Life, but decided to go to express her views. She said it was something she’d always wanted to do.

“It was super eye opening and super humbling to see the amount of people that were there, which I was surprised about,” Weiler said.

Weiler also said she learned from the march.

“Now, I am well informed, and I am able to have those conversations,” Weiler said. “I wouldn’t have had them in the past, but now that I know exactly what I’m fighting for and what I believe in I feel that as long as those conversations are gentle and considerate to other people’s viewpoints, it’s okay to have them.”

Grace Jackson, a first-year political science major, said she identifies herself as pro-choice, or someone who advocates for the legalization of abortion. Although Jackson is pro-choice, she said she supports the freedom to express your own opinion.

“I think it’s a great show of activism and great that people are getting together to support a cause,” Jackson said. “I just don’t think the cause that they are supporting is just.”

Jackson said she is not against pro-life, but said she believes women should make the choice for themselves.

“I think Butler is actually relatively liberal, so I think other students share my viewpoints,” Jackson said. “I’m not saying it’s the right decision, this is just what I believe.”

“Going in Indianapolis was actually a really cool experience because this is only the second year they have hosted a march in Indianapolis,” Gruett said. “Most of them were middle school and high schoolers. Seeing a lot more young people was super empowering and gave me a lot of hope.”

Sean O’Brien, a junior psychology and pre-med major, said he attended the event for the first time which further solidified his stance on what it means to be pro-life.

“Being pro-life is caring about all life from conception to natural death so caring about the lives of immigrants, the elderly, and the downtrodden,” O’Brien said. “I always just thought pro-life was anti-abortion, so it was cool to have that expanded.”

O’Brien also said it can be challenging to have these conversations as a man.

“I know a lot of people, especially on the pro-choice side, say this is no place for a man’s opinion, but I still think the issue is relevant to everyone,” O’Brien said.