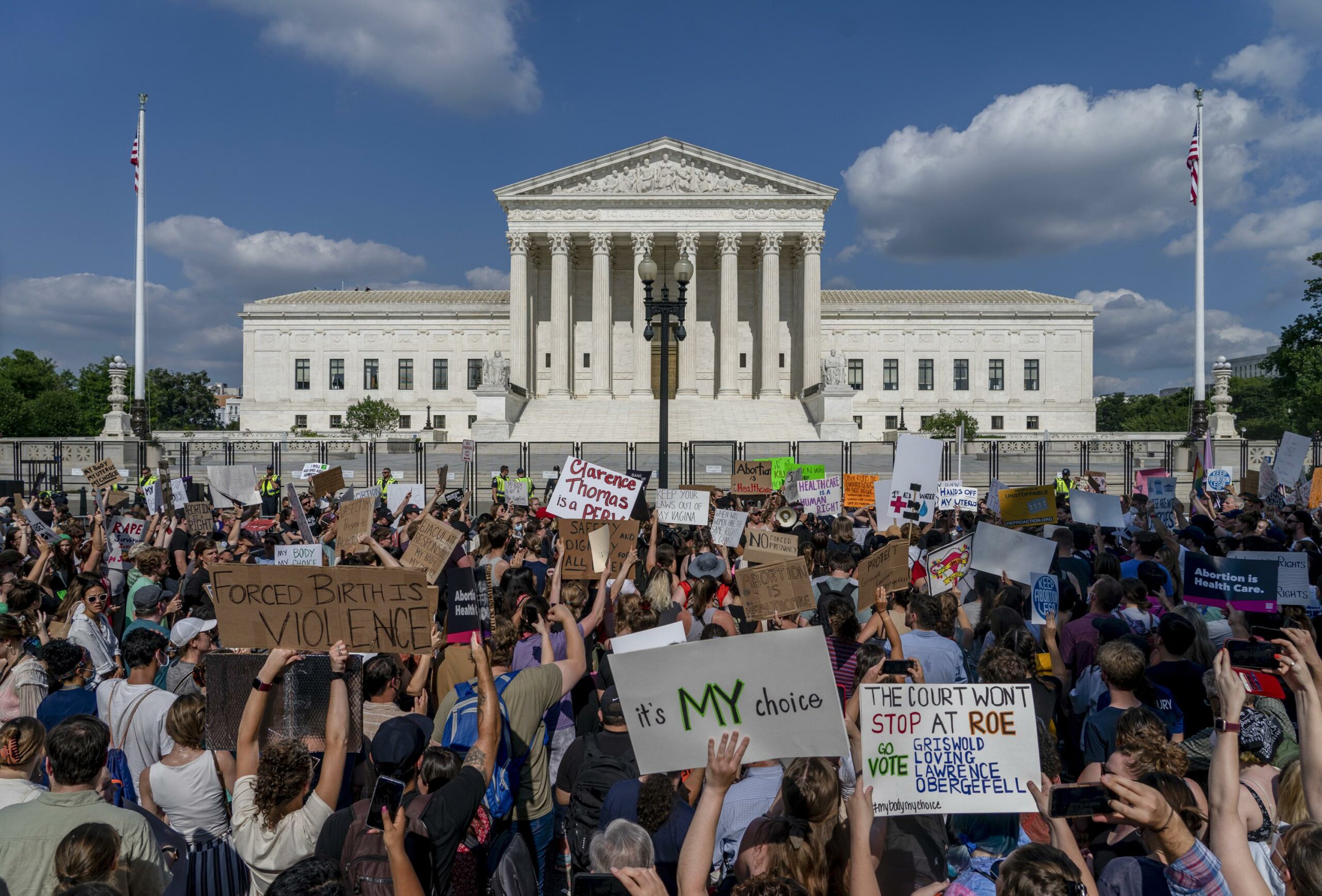 On Friday, June 24, the Supreme Court of the United States overruled Roe v. Wade in its decision for Dobbs v. Jackson Women’s Health Organization, in favor of Mississippi’s 2018 law banning abortion after 15 weeks of gestation. The court eliminated the constitutional right to an abortion in a 6-3 ruling. It is now up to each individual state to determine its own abortion laws.

Prior to the official ruling, Politico released a leaked draft opinion on May 3 stating that the Supreme Court had voted to overturn Roe v. Wade. This was when the public became aware that the court case was being revisited and the possibility it would be overruled.

According to the New York Times, the overruling immediately triggered almost 20 states to implement abortion bans. These trigger laws have caused abortion clinics to cancel appointments in fear of prosecution, leaving pregnant people scrambling to travel to states where getting an abortion is still legal. There is currently no finalized decision on abortion laws in Indiana; however, shortly following the ruling, Gov. Holcomb tweeted where his personal “pro-life” values stand, and he has called the General Assembly on July 6 to discuss matters.

Lillie Foley, a senior race, gender and sexuality studies major, along with the 2022-23 president of Gender Equity Movement at Butler, was left with no words when she heard SCOTUS’s decision on Friday.

“Still no words … it was just unbelievable,” Foley said. “It felt unreal the whole day, [and] I’m thinking like, ‘It is real, and it is happening.’ Just a sad day for women, [and] just a sad day for the country.”

While some are upset with the overruling, others are relieved that SCOTUS gave the power to the states to determine the right to abortion. Ryan Crnarich, a senior political science major and the president of Butler University College Republicans, said the states should have the power to decide this right.

“Elected officials are going to be able to voice their opinions and to negotiate bills and things like that on abortion, instead of the unelected Supreme Court,” Crnarich said. “That’s really where a lot of my joy came from because the power is going back to the states.”

The downfall of Roe has led to protests across the country and an increased fight for women’s and reproductive rights, including a protest at the Indiana Statehouse on June 25 organized by Planned Parenthood Alliance Advocates, the Indiana chapter of the American Civil Liberties Union and Women4Change. People of all genders are coming together stating the government has no right to control the bodies of those who menstruate. Protesters opposing the Supreme Court ruling believe that there are other issues that the government should take priority on.

Foley said the government and people affiliated as pro-life should be concerned with the aftereffects of having a child.

Gretchen Erdmann, a senior pharmacy major, also believes that before bringing a child into this world, there should be a better support system for parents and their children.

“You want this child to be born so badly that you are willing to do anything to make sure this child gets born, but it doesn’t seem like anybody is thinking about what happens after they’re born,” Erdmann said. “You’re bringing a child into a world where they’re not wanted, where they don’t have the resources to grow up healthy and strong and happy. So it almost becomes a question of if they’re gonna grow up with a terrible home life with no opportunities, how is that better? If we’re just going to fight for them to be born only for them to live and die in poverty, how are we helping anybody?”

Erdmann cited the American College of Obstetricians and Gynecologists’ statement released following the overruling condemning SCOTUS’s decision. Aside from advocating for abortion, ACOG also expressed how medical abortions are necessary for the health and safety of patients most of the time.

As a future healthcare provider, Erdmann’s main priority is the safety of her patients and the overruling of Roe v. Wade could jeopardize that.

“I believe that as healthcare providers, we should have the power to do everything in our power to keep [patients] safe and healthy, and it is also our job to make sure that they know all of their options as it pertains to their health, and what they can do, and know that they have power over what medications they take, what procedures they choose to have and what procedures they choose not to have,” Erdmann said. “Restricting a healthcare provider’s ability to provide health care is just absolutely crazy to me because the people restricting it have no medical degree, they didn’t go to school for this, they don’t know the science to back it up … And not oftentimes just physical health — mental health as well.”

Sadia Khatri, a sophomore healthcare and business and English literature double major said that an individual’s beliefs on abortion should not get in the way of others’ access to one.

“I think that abortion is a very important aspect of healthcare,” Khatri said. “It is an important right that all people should be entitled to and should have access to. I think that an important aspect of it is that regardless of what one individual person may think, and if you have specific beliefs about it, and if you personally are against it, that’s one thing, but I think it’s really important to not impose those on others, especially if those beliefs are rooted in a spiritual or religious belief.”

The overruling of Roe v. Wade brings into question other court decisions that could potentially be revised. According to the Boston Herald, Justice Clarence Thomas expressed the revisitation of rights to contraception and same-sex marriage in his concurring opinion overturning Roe v. Wade. He claimed that the same reasoning SCOTUS used to overturn Roe v. Wade can be applied to other landmark civil rights cases as well.

Erdmann agrees that the fall of Roe could potentially lead to the downfall of other rights in the U.S.

“So [SCOTUS] can just ‘take backsies’ anytime they want now, apparently,” Erdmann said. “Now that the Supreme Court has reversed one of their rulings, it feels like every single ruling they’ve made up until now could be reversed because they’ve set a precedent. The ones I think they’ll go for next [are Griswold v. Connecticut], which is for the right to contraception, and then I think they’ll go for [Lawrence v. Texas] and [Obergefell v. Hodges]. So they will restrict the rights of women, and then they will take away the rights of gay people, and I don’t know where they’re going to go after that, but it is terrifying to think about.”

Emma Gifford, a senior political science-history and peace and conflict studies double major, said that the jeopardization of other rights reflects the image SCOTUS has for America.

“It’s about controlling people’s lives and perpetuating this very heteronormative society that fits the very classic American dream of you … get married to someone of the opposite sex and have kids,” Gifford said.

Gifford also maintains the importance of remembering pregnancy does not only occur to women, opting to use the word “menstruator” when referring to abortion rights.

“I don’t want to exclude [transgender men] or nonbinary people who menstruate and have the potential to get pregnant and might need an abortion,” Gifford said. “In some statements, people are just talking about women when it’s not just women who are going to be impacted by this.”

In addition to discussions on gender, the concept of separating church and state has been a debated topic for the last several years. The First Amendment of the United States Constitution, as part of the Bill of Rights’ freedom of religion, states that “Congress shall make no law respecting an establishment of religion.” Known as the Establishment Clause, it is being argued that the overruling of Roe v. Wade undermines this separation.

Crnarich argues that the sanctity of life — beginning at conception — should be respected, as influenced both by his own personal beliefs and his Catholic faith.

“I think it’s very difficult when you look at a line,” Crnarich said. “Some people say, ‘Oh, you look at the first trimester, second trimester is when the line is good for when an abortion is right and when an abortion is wrong.’ So I feel as though that’s a very gray area to me, and it’s hard for me to comprehend those things. So for me, seeing it at conception and feeling that life is sacred, and that life begins then, to me, it’s really how I developed my thing. To me, it’s hard to deny that life begins at conception, personally. …  I hope people should hold [the sacredness of a child’s life] that way, at the same level as it’s going to be held now.”

On the other hand, Khatri believes “sanctity of life” is a religious argument and goes to prove how the overruling of Roe v. Wade is problematic in regards to the separation of church and state.

“I think that we’ve seen the reaction of these politicians and of the justices towards how [abortion] is sanctifying human life, and I think that is something that’s rooted in evangelical beliefs, and it’s not necessarily things that everyone believes,” Khatri said. “So I think that religion and the religious beliefs of the politicians in power is an aspect that contributed to [the overruling].”

No matter an individual’s personal beliefs on abortion, students believe that more needs to be done to support parents postpartum, whether that be providing more financial stability or improving foster care systems. Crnarich hopes that these improvements will be made.

“We understand maybe not every family, woman is not going to be ready to raise a child; I totally understand that,” Crnarich said. “But that doesn’t mean that [the child] shouldn’t be given a shot at life, and I think that programs like foster care, [and] things like that should certainly be expanded, and money should certainly be given to even more resources, and I would hope the Republicans would be on board with that.”

In the meantime, while many pro-abortion students feel despondent, some will continue to oppose the ruling in their own ways.

“Reach out to other menstruators and help them form a plan, help support them and whatever their decision is [in pregnancy],” Gifford said. “And then I would say the average person should be contacting representatives, that they should be voting in the fall, that they should continue protesting, that they should send letters to Congress, that they should just advocate — and not submit to your privilege that you might have to just sit and ignore this … I think anything you can do to support menstruators’ right to choose is important at this point.”