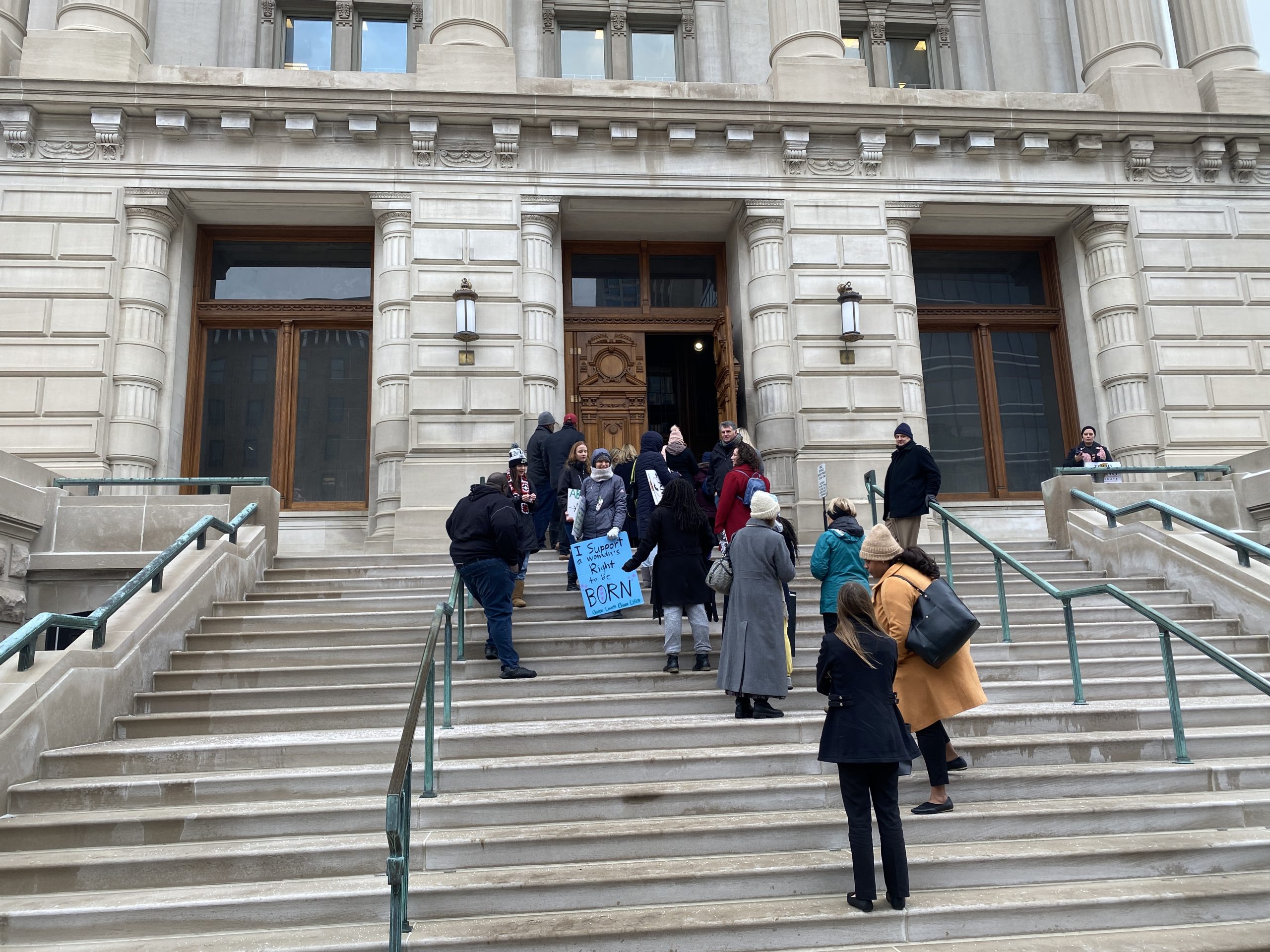 Protesters gather on the steps of the Indiana Statehouse to finish the pro-life march that took place on Jan. 24. Photo by Tessa Fackrell.

49 years ago, on Jan. 22, 1973, the Supreme Court of the United States adjudicated Roe v. Wade. This case set the precedent that, before their third trimester, women are legally allowed to get an abortion in the United States without intervention from the state.

This decision remains controversial in the eyes of some Americans, as the question of the importance of women’s versus fetus’ autonomy remains an unending debate.

With a 6-to-3 conservative majority among SCOTUS justices, many fear that the country might not see the 50-year anniversary of the landmark ruling.

SCOTUS is currently considering court cases from individual states, which discuss the constitutionality of state legislation regarding abortion. One such case is Dobbs v. Jackson Women’s Health Association, which challenges The Mississippi Gestational Age Act, a state law that would ban abortion after the 15th week of pregnancy in Mississippi. This is two months before the precedent set by Roe and subsequent cases.

Statements for this case were heard on Dec. 1, 2021. Many say that the outcome of Dobbs v. Jackson Women’s Health Association could overturn Roe v. Wade entirely, and leave abortion laws up to individual state legislatures. SCOTUS’s decision on Dobbs is expected in June 2022.

First-year pharmacy major Taylor Olmstead believes that leaving the decision about abortion to individual states will be problematic.

“I feel like it’s going to get way too complicated if Indiana thinks [one] way, but then New York thinks [another] way,” Olmstead said. “I think there’s going to be a lot of problems with women trying to travel … to get [abortions], and I don’t know how we would police the system. I just feel like it causes way too many problems that we don’t even need to be dealing with.”

While individual state legislation would complicate the federal ruling decided by Roe v. Wade, which secures a woman’s access to abortions without government interferance, pro-life groups believe that giving states the decision is one step closer to ending abortion.

Diana Ningen, president of the Bulldogs for Life club, said she is cautiously optimistic about the outcome of this case.

“So what we would hope for is yes, that Roe v. Wade should be overturned,” Ningen said. “But that would mean that there’s still a lot of pro-life work to be done because Roe v. Wade being overturned would mean everything would go back to the states.”

Dr. Bill Blomquist, a guest professor in the department of political science, discussed two possibilities if the Mississippi Gestational Act is found to be constitutional.

The first outcome would be that the court rules in favor of Dobbs, and overturns Roe v. Wade completely. If this were to happen, the decision of abortion rights would be returned to state legislatures.

The second possible outcome is the court still rules that the Mississippi Gestational Act is constitutional, but doesn’t outright overturn Roe v. Wade.

“It’s possible that they don’t explicitly overturn Roe, but allow the Mississippi law to stand,” Blomquist said. “And a lot of people will say, well, that’s no different from overturning Roe, but it might be different in certain respects, it might mean that an outright ban on abortion altogether, if a state were to do that, would still be in trouble with the court.”

The SCOTUS decision on Dobbs v. Jackson Women’s Health Association will not be the end of the abortion debate in America. Regardless of the decision, and whether or not Roe v. Wade is overturned, states, politicians and activists will continue to fight for what they believe is right.