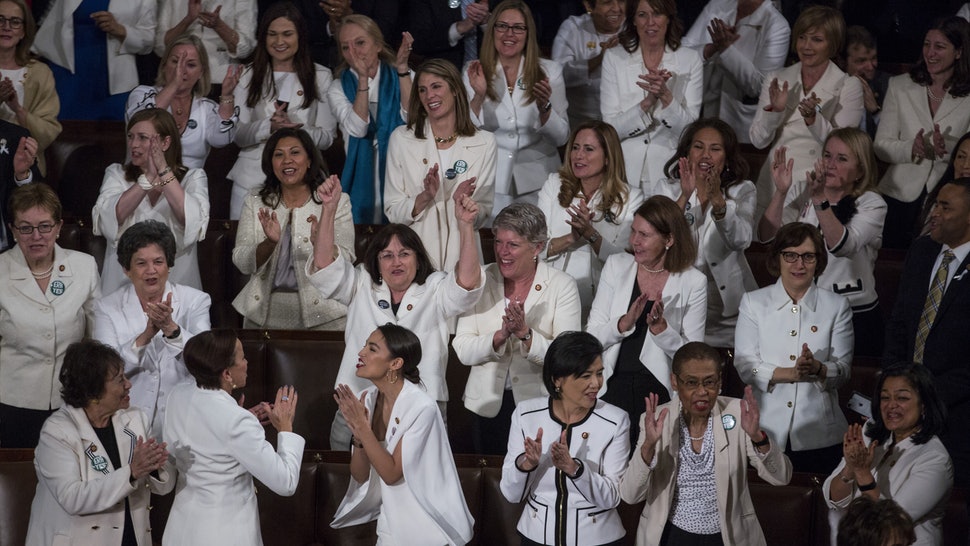 Under the scrutiny of dozens of white-clad Congresswomen, President Trump attempted to defend his record on women’s issues during his second State of the Union address. Throughout his speech, Trump capitalized on women’s successes over the past year— despite the fact, of course, that he belittles women whenever Twitter is within reach. Smiling proudly, he took credit for women’s economic triumphs in the workforce this past year, but the reality is that women’s biggest obstacle is the President himself.

From economic policies to contraceptive access and women’s healthcare, Trump has made it a priority to restrict opportunities that would otherwise allow women to better themselves and improve the quality of life we lead. Trump’s State of The Union speech, however, painted him as a champion of women’s rights.

“No one has benefited more from our thriving economy than women, who have filled 58 percent of the newly created jobs last year,” Trump said, who was then startled by the thunderous applause his statement induced from women on both sides of the aisle celebrating their success.

“You were not supposed to do that,” Trump responded condescendingly.

Continuing his applause of women, he then went on to praise the record-breaking election of 117 women to the 116th Congress in 2018.

“Exactly one century after Congress passed the constitutional amendment giving women the right to vote, we also have more women serving in Congress than at any time before,” Trump said.

That’s right, now that Congress is in its 116th session, women make up nearly half of its voting members. So, 230 years after the meeting of its first session, Congress actually reflects the country’s population somewhat accurately— emphasis on somewhat.

That, too, received heavy applause.

He failed to mention, however, that exactly 54 years ago, women were also “given” access to something else that has proved crucial to our increased political and workplace involvement: contraception. In the landmark Supreme Court decision Griswold v. Connecticut, it was established that women have the right to use contraception on the basis of privacy.

Because of women’s freedom to control our fertility, these decisions, in turn, have led to profound and productive social changes.

Beyond improving our basic quality of life, the legalization of birth control has enabled women to go to— and complete— college at higher rates, to reach our full potential in our career fields through family planning and to earn higher salaries.

Women have surpassed men in earning bachelor’s degrees and now earn more than half of all advanced degrees— due in part to access to birth control. With the ability to control our fertility, women can focus more closely on school and work, leading to higher achievement. And by 1970, five years after the Pill became legal, college enrollment was already up 20 percent among women with access to birth control, according to Planned Parenthood.

Additionally, there are more female doctors, lawyers and business owners contributing to the economy than before birth control access was nationally protected. In 2018, for example, women earned nearly half of all J.D. degrees, according to the American Bar Association. Further, Planned Parenthood estimates that contraception has accounted for more than 30 percent of the increase in the proportion of women in skilled careers from 1970 to 1990.

Though women working full-time still only earn 80 percent of what their male counterparts earn, according to Pew Research Center, access to contraception is also helping to close the wage gap by drawing more women to the workforce.

Undeniably connected, women’s access to safe, effective and affordable birth control and abortion is a precedent for our participation in workplace settings as well as traditional career-oriented fields like medicine, business and law.

“Let us work together to build a culture that cherishes innocent life,” he said, while simultaneously devaluing the lives of living women.

Though he didn’t specifically threaten access to birth control or non-late-term abortions during his address, his sentiment surrounding the issue of contraception should be cause for alarm. His message gives a voice to the anti-choice, anti-contraception factions that don’t see a connection between women’s achievement and contraceptive access— or don’t care that there is one.

Opponents of contraception— fundamentalist Christians, the Catholic Church and politicians like Rick Santorum, who tell rape survivors to make the best out of a bad situation— are emboldened by Trump’s anti-autonomy rhetoric.

Not only that, but Trump’s administration has already taken strides to limit women’s access to birth control. The day after midterms— when all those women President Trump celebrated were elected— the Trump administration issued new rules that allow employers to deny contraceptive coverage to their employees on a religious basis.

Using pseudo-science and popular falsehoods to rationalize their attack on birth control access— from exaggerating supposed harms of contraceptive pills to claiming that birth control doesn’t really reduce unwanted pregnancies and leads to riskier sex— the Trump administration obviously wants to limit reproductive freedom, not because that’s what the majority of Americans want, but because it appeals to the religious base that helped the President get elected in the first place.

Before running for president and realizing the voting power of white far-right evangelicals, though, Donald Trump was actually publicly pro-choice.

So, why does he praise women in the workforce but threaten their procreative autonomy? Because an election is coming up and he needs to broaden his base to get reelected. Since the government shutdown, President Trump has lost the support of a voting bloc he easily won in 2016: the white working class. Looking forward, he needs to expand his base if he wants a second term in the White House, especially with his current approval rating.

The ability to decide when, how or whether or not to carry a child is directly linked to a woman’s educational attainment, economic progress and overall well being. The contemporary success of American women overall is well-deserved, but it would absolutely not be possible without the persistence of our predecessors who fought for— and continue to fight for— access to safe and effective birth control and abortion.

Women’s procreative autonomy is directly linked to our access to the workforce — it is a top economic driver for us. So if we are to genuinely celebrate the success of women, we must also maintain women’s reproductive rights as necessary to that success.

Though President Trump’s State of the Union address attempted to appeal to all Americans, some of his messages were contradictory and ingenuine, including his message to women—a message of congratulation contradicted by a threat to our rights. The suffragettes who pioneered the fight for our rights are spinning in their graves— this is not the legacy they intended to leave. President Trump has no interest in supporting women, and the sooner we acknowledge it, the better.