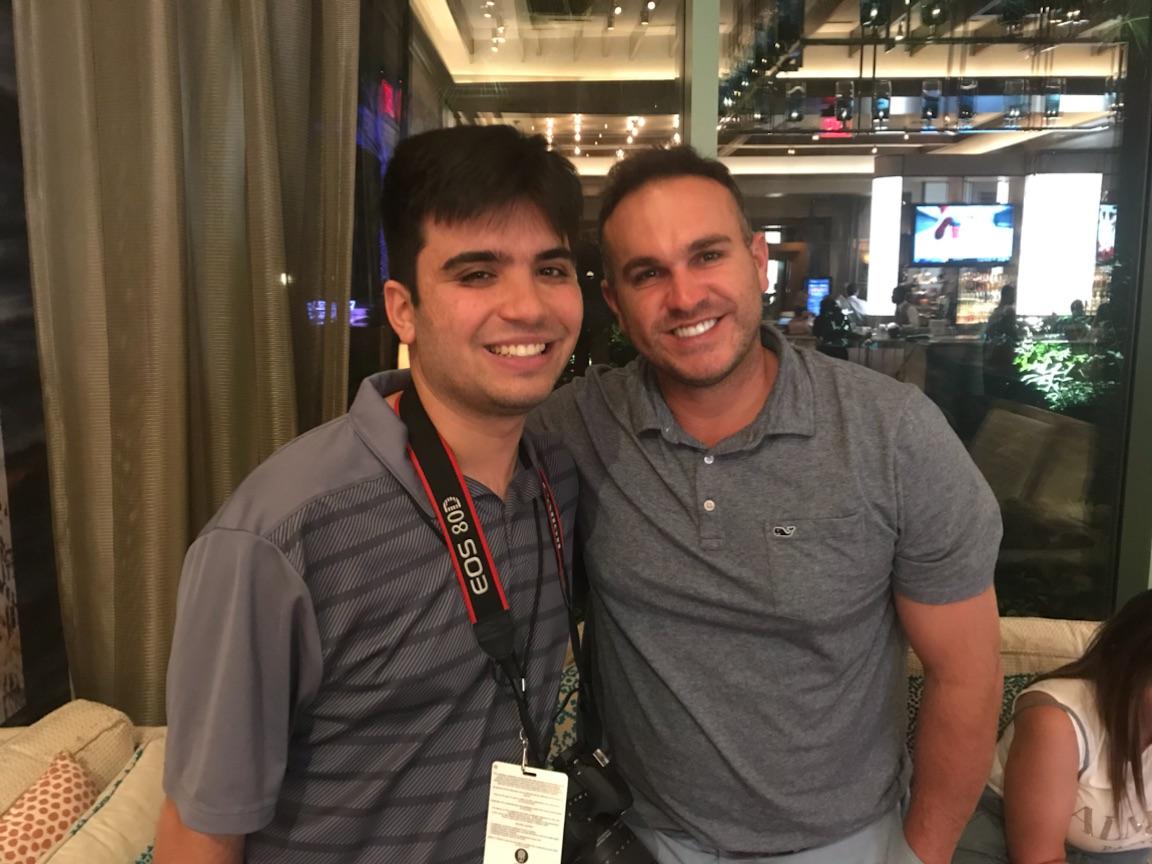 Here’s something you may not know about me: I like to handle my business my own way. I’m always happy to assist fellow Bulldogs when needed, but I’m usually uncomfortable asking other people for help.

A month before I headed out to the Battle 4 Atlantis, I realized I needed to go against the grain. I had never traveled to the Bahamas, and I needed to enlist the help of someone who had ventured to the island. If I could find someone who loved this trip, I would be in business.

I headed to Hinkle Fieldhouse to contemplate. I knew spending time within the cathedral’s hallowed walls would give me clarity.

Then, a lightbulb went off in my head. I thought of the perfect person, someone who I knew remembered his trip from four years ago fondly. He played in the tournament four years ago, and I knew he had a good time.

Four words. Four simple words, but they stuck with me. I heeded the Big Cat’s words of wisdom during my time in the city of Nassau, Bahamas. Every second was nothing short of a blast.

I’m writing this column on a plane flying over the Atlantic Ocean, and I’m realizing how fortunate I am to attend Butler University. I have covered Butler athletics in Indiana, Illinois, Michigan, Ohio, Kentucky, Tennessee, Oregon and now the Bahamas.

I had a courtside seat in Paradise Island as the hometown team duked it out against the University of Dayton, Middle Tennessee State University and the University of Florida. The Bulldogs went 2-1 in the tournament, concluding the trip with a quintessential Butler win over the Gators.

For most Butler fans, the victory tasted sweeter than pumpkin pie. For me, watching Butler chomp on Florida was beyond delectable.

Florida beat Butler in the 2000 and 2007 NCAA Tournaments, but the Bulldogs got revenge in the 2011 Elite Eight. During that game, I realized I was destined to become a Bulldog.

I had attended the Sweet 16 in New Orleans that year and watched Butler take down Wisconsin with my family. We drove back to my hometown of Schererville, Indiana, but made a pit stop along the way.

We decided to take a chance. I was addicted to Butler basketball, and I needed to see how just how far those Bulldogs would advance in their second tournament run.

We took in the instant classic inside Atherton Union’s Reilly Room with Butler students, faculty and staff. After the final buzzer sounded, we hooped and hollered by the iconic Bulldog statute. For a 14-year-old eighth grader, that moment was pretty cool.

You could say the most recent victory over Florida was a solid win against an SEC opponent, Butler’s fifth triumph over that conference since I arrived on campus.

I’ll say it was destiny.

During my trip to paradise, I spent some time enjoying the extravagant locale. I basked in the Bahamian sunshine, saw a plethora of colored fish in the aquariums and enjoyed quality time with my mother, Kathy. We spent our days relaxing by the pool and sinking our toes in the sand. Any worries I could have possibly had were washed away by the soothing sounds of the Atlantic Ocean.

Everything felt unreal. Think about it. You spend your days relaxing in paradise, then you get to watch the Bulldogs play at night? My wildest dreams could not concoct this.

As if that weren’t enough, I also enjoyed some chance encounters inside the Atlantis resort. The Butler contingency gathered before and after games at a spacious lounge called Plato’s. Butler fans and alumni engulfed the island with familiar cheers as the Bulldogs strolled past before games.

Before the Florida game, I participated in an experience I will remember for the rest of my life. Butler Nation had not descended upon Plato’s yet, so a bunch of rowdy University of Virginia fans packed the premises. They weren’t watching basketball, as their team had already locked up the tournament’s championship earlier that afternoon.

They were waiting with bated breath to see if their football team would take down their arch-nemesis, the Virginia Tech Hokies. I took inventory of the room. You could slice the tension with a knife. Nails were gnawed off of fingertips. When the Wahoos started to scream, you could probably hear their cheers back in the Commonwealth.

Now, I’m not the biggest college football guy. Basketball and baseball are my two favorite sports. Moreover, I had no reason to root for either of those teams.

But once a Virginia fan leaned in and gave me a quick history lesson, I understood the situation’s magnitude.

After I witnessed the Virginia fans walk away in complete disgust, I made another critical decision. I stuck around Plato’s because I knew those trusty Bulldog fans would start arriving soon. I started to take photos of the final gathering, just like the previous two nights. I’m a man of routine, and I did nothing out of the ordinary. I was just doing my job.

Little did I know that my world would be rocked yet again.

Now, I may be a Sox fan, but my father, John, is the world’s biggest Cubs fan. I know, it’s bizarre. But when you grow up around Chicago, you understand one thing: you have to choose one or the other. When I was seven years old, former South Side outfielder Magglio Ordonez hooked me to the “Dark Side.” When I took the diamond, I wore his number, 30. I never looked back.

Flash back to reality.

“You won’t believe who’s sitting in the back corner,” Mike said. “Miguel Montero. You want to get a picture with him?”

Miguel Montero… wait, what? The same man who hit a pinch-hit grand slam in the 2016 National League Championship Series to help take down the Los Angeles Dodgers? For… wait a second… the Cubs?

Full disclosure: When Montero pelted that grand slam at Wrigley Field, I jumped up and cheered. I wasn’t necessarily rooting for the Cubs, but I was rooting for my dad. That’s what makes sports so special: With one swing, a guy who hits .216 on the season becomes a hero.

We approached Montero and his wife, Vanessa. They were relaxing on a couch together, about as unbothered as a couple could be.

“Hey, Miguel,” Mike asked. “Do you want to get a picture with a Sox fan?” He obliged.

Like I said, this experience was more than just covering a basketball tournament. It was something I’ll remember forever. They say that good things come in threes. As I walked through the resort to the ballroom-turned-basketball arena, I smiled as a third chance encounter presented itself.

I ran into former Butler head coach Thad Matta and his family. A Butler legend, taking it all in. I asked him if he was having fun.

He, like Wideman, needed only four words to express his thoughts. But as I reflect on the trip, I realize that Matta was absolutely right. Those few days offered me a fruitful feast, a cornucopia of joy.

Whenever I think about the Battle 4 Atlantis, I’ll tell myself, “Wow. That was one heck of a senior year holiday present.”

Thanks for the advice, Tyler. I definitely enjoyed life in paradise.