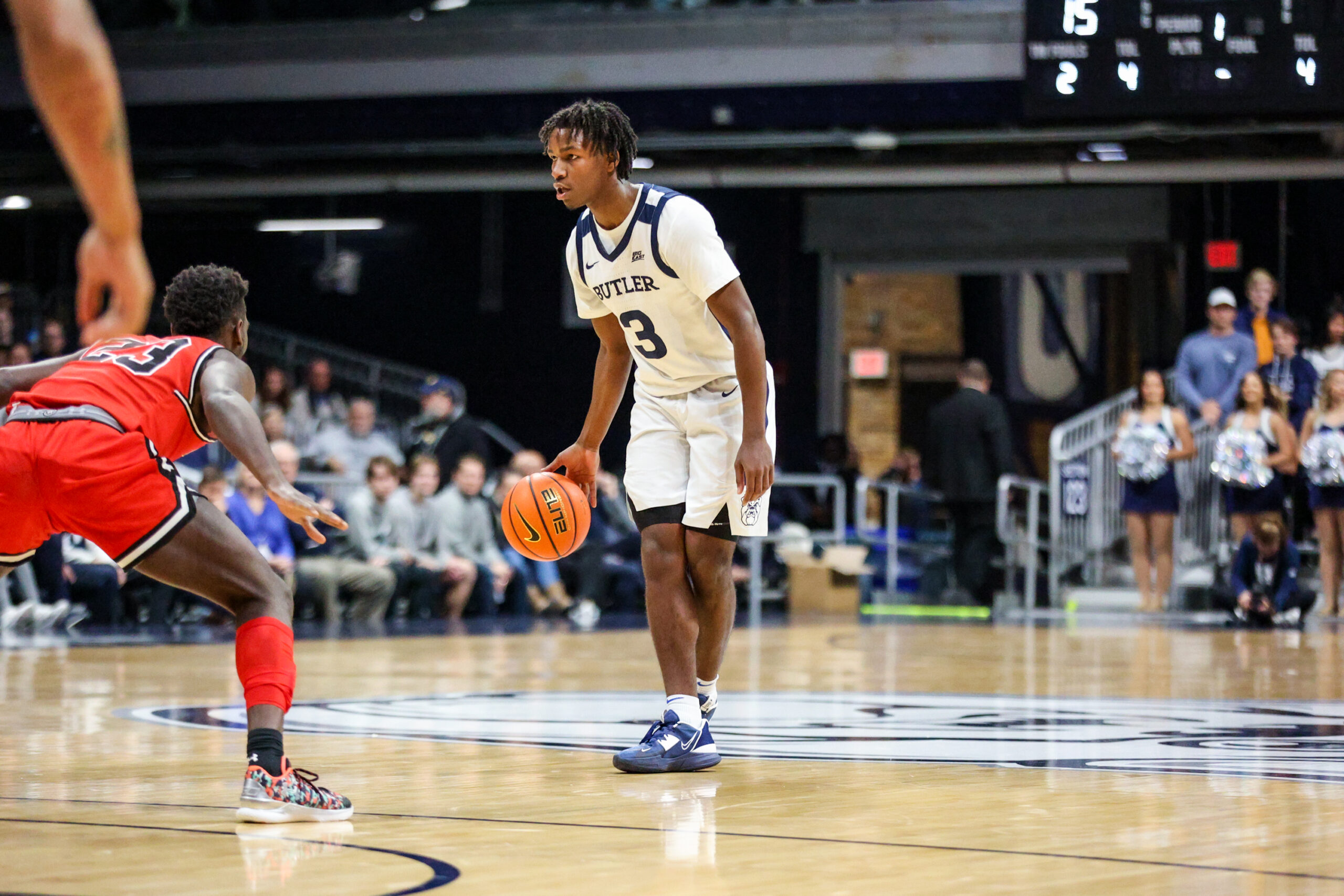 Junior guard Chuck Harris stands at the top of the key against Saint Francis on Nov. 17. Photo by Claire Runkel.

The Butler men’s basketball handily defeated The Citadel 89-42, relying heavily on their hot shooting from beyond the arc. Six players made at least one three-pointer — three of those players hit four shots from deep. Sophomores Jayden Taylor and Simas Lukosius led the Bulldogs with 18 points each — combining for 14-19 from the field and 8-15 from three-point land. Graduate guard Eric Hunter Jr. did a little bit of everything in this contest, ending with 15 points, six assists, five steals and two blocks. Junior guard Chuck Harris rounded out the double digit scoring for Butler with 13 points, seven rebounds and four assists.

The Dawgs had 20 bench points, led by redshirt freshman Pierce Thomas who had nine points, two steals, and a reverse slam that you have to see to believe. In the postgame presser, Thomas admitted that his amazing play was premeditated.

“I saw the guy was there but I had already made my mind up how I was gonna jump,” Thomas said. “So I just went up and finished strong.”

For The Citadel, graduate Austin Ash led the team with 10 points. Senior Stephen Clark, who came into this game averaging 20 points per game, finished with just five points on 2-11 shooting from the field.

Let’s go beyond the box score on Butler’s third win of the season.

When a team starts on a 17-0 run in college basketball, there’s a good chance they will win the game. Butler did just that, going 6-10 from the field and 4-7 from three in a less than five-minute span. The run may have gone on longer had The Citadel head coach Ed Conroy not called a timeout after two back-to-back steals and slam dunks by Taylor.

Taylor’s aggressiveness and efficiency on offense have been huge for the Butler offense. In the last two games, Taylor has shot 76% from the field. A caveat could be placed here because of the lower level of competition, but his confidence has got to be sky-high.

Fastbreaks continue to be a strength

The pace of play for Butler’s offense this season has been a sight to see. Coming into this season, head coach Thad Matta promised that this team would play a fast brand of offense. Four games into the season, the numbers are there to prove it. In fastbreak points per game, Butler ranks in the top 25 among Division 1 teams.

The great thing about this kind of play is that Butler has multiple players that can push the pace off of turnovers and missed shots. Hunter Jr., Harris, Taylor, Lukosius, junior guard Myles Tate and even Thomas at times have shown the ability to take the ball down the court and either go coast-to-coast or find an open teammate on a kick out. When shots aren’t falling in the halfcourt offense, being able to push the pace will be crucial on offense.

Basketball in the Bahamas

Next up for the Bulldogs is probably their toughest non-conference game of the season against No. 22 Tennessee in Paradise Island, Bahamas. The game is a part of the Battle 4 Atlantis Tournament, one of the premier college basketball tournaments during the Thanksgiving holiday weekend. Eight teams will enter the field, including the defending national champion and sixth-ranked Kansas Jayhawks. Also a part of the group are No. 21 Dayton, BYU, NC State, USC, and Wisconsin.

Matta expressed his eagerness to see how his team plays in such a competitive tournament.

“Next Wednesday, we’re on the biggest stage in college basketball,” Matta said.  “The Battle 4 Atlantis is, in my mind, the premier tournament. And you look at the field and who’s in the field and you got a lot of top 25 teams …  it’s going to be good for us early. We’re going to get tested and we’re gonna have to play really well.”