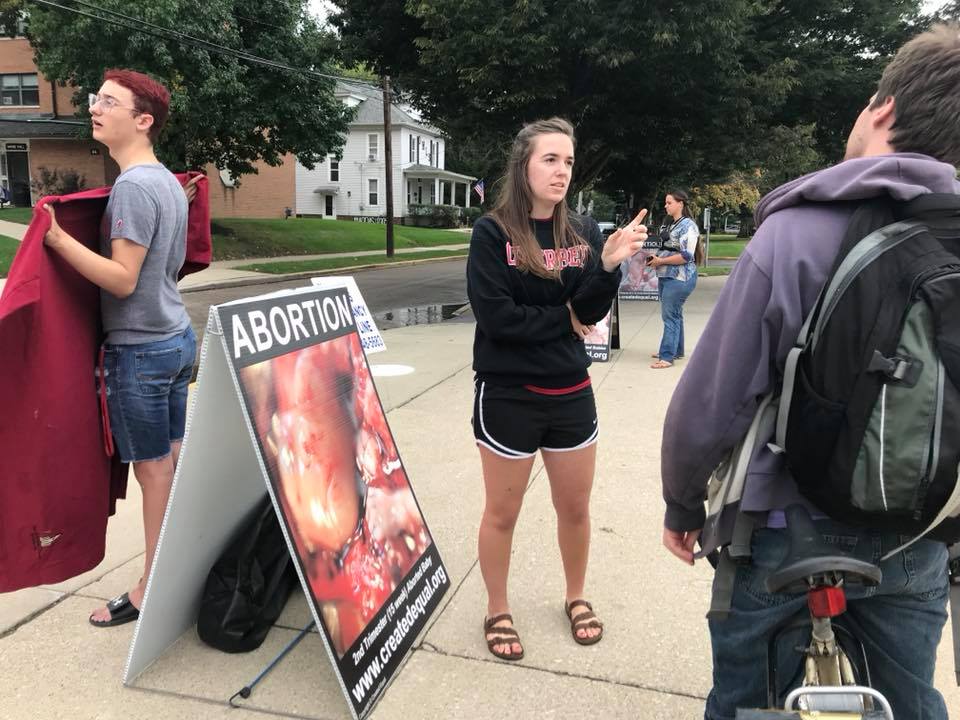 The Butler community fell into disarray on the afternoon of Oct. 5 when an unaffiliated bloc of demonstrators picketed Hampton Drive while wearing body cameras.

The group, Created Equal, is a pro-life organization which describes itself as “a social action movement seeking to end the greatest human rights injustice of our time.”

A smaller group of fundamentalists took action on Oct. 16 and spread similar rhetoric, but their numbers and presence were far less pronounced.  In both instances, students were met with a smattering of protesters exclaiming anti-choice rhetoric and bearing graphic posters of aborted fetuses.

Created Equal’s visit to Butler was a part of their principal initiative, a series of so-called Justice Rides. By occupying public spaces like campuses and downtown squares, they advocate against the “age-based discrimination of abortion” through pamphleting and conversation. Justice Rides have brought members across the nation to spread and “share the healing message of the Gospel of Jesus Christ with men and women in pain from previous abortions.”

Interestingly, their leadership is comprised of freshly college-graduated Republicans which lends a youthful ethos to their organizing. This has allowed Created Equal to appeal high school and college students alike, with many of their engagements, ie. Butler, specifically geared toward recruiting young folks across the country to join the campaign.

The heart of Created Equal’s mission, however, can be found in the cameras. In tandem with their incendiary tactics, protestors work to agitate and capture responses from community members. This is a common recruitment strategy for conservative groups: attempt to “trigger” purported feminists, record their reactions and ramp up the ridicule in edited montages. A quick trip to YouTube finds such videos accruing millions of views and gaining a massive cult following. Unsurprisingly, Created Equal’s Facebook adopts this very same sensationalist approach.

What’s most important to realize from their demonstration can be found in the roots of the group’s campaign organizing.  As their website notes, Justice Rides were modeled after the Freedom Riders, a group of progressives who helped spearhead civil rights activism in the early 1960’s. Diane Nash, noted black feminist, helped lead the charge of challenging segregationist ordinances. In the rides, activists interracially occupied busses and intentionally drove through cities with racist mandates.  Through consciousness raising and civil disobedience, Freedom Rides heralded change in anti-black legislature as a result.

Let’s not twist it, then: Justice Rides have capitalized on black feminist strategizing, yet stripped bare the progressive framework which guided their cause in the first place. Freedom Riders dissented against an oppressive legislature and championed a politic free of state violence.

Consequently, Created Equal has blanched their legacy, and continue to push forth a politic diametrically opposed to those whose work they draw from.

This is a familiar trend across the board. In a process known as co-optation, organizations and institutions adopt the practices and language of social movements while subverting the original intent along the way.  Social justice vocabularies are often lifted, defanged, and subsequently reworked into organizational structures once they gain enough traction.

Ann Savage, a College of Communication professor, notes that “co-optation marginalizes the originators as well as imposes the views of the new group onto them – even if they don’t agree with the group who co-opted their language or tactics.”

Groups and institutions co-opt for various reasons, whether it be found in the social capital of proven organizing strategies in Created Equal’s case, or actually profiteering off social justice.

Nowadays, “wokeness” operates as some sort of competition, “intersectionality” has practically become a buzzword, and “diversity” is suddenly so incredibly important in every career path.  Co-optation has effectively eroded the impact and intent of progressive causes and terminology, and our understandings have been have become muddied as a result.

But it makes sense why groups like Created Equal are so eager lean into proven progressive praxis that has captured mainstream acceptance.  Oddly enough, though, Butler’s response to the visit suspiciously parallels some of the very same co-optive practices.

On the day of the demonstration, the Efroymson Diversity Center also hosted their monthly First Friday talk. Students, faculty and community leaders alike gathered to discuss pressing issues surrounding campus life.   During the meeting, many faculty revealed the university was informed of Created Equal’s visit over a week in advance and had planned how to approach the visit.

Butler’s handling of the situation was finally articulated in a campus-wide email on Oct. 17. Sally Click, dean of students, addressed that the university’s “plan does not include a campus message to forewarn the campus community of a group’s visit. Consequently, each of us should be prepared to encounter messages with which we disagree and are potentially hurtful.”

In lieu of the university informing the student body, Click offered alternative methods of engagement such as “organiz[ing] a peaceful response to the visitors at the site, away from the site, or at another time” and “[to] warn people to avoid the area” if they could be “triggered.”

What’s telling of this response is how it skirts the issue of institutional accountability and instead focuses on individual action.  Herein lies the issue: Butler espouses wellness and inclusion, yet fails to follow up with their actions.

BU Be Well, one of Butler’s most heavily emphasized student action plans this year, is a multi-dimensional model which is meant to help provide a “holistic” and “transformative” Butler experience.  The initiatives are wide-ranging and include various tenets of community conduct such as social wellness, diversity, and community.

What’s worrying about this campaign is its emphasis on several aspects of campus life which have been historically lacking.  While BU Be Well could be seen as a prospective platform of growth and campus camaraderie, it’s difficult to reconcile this initiative with the fact that it is, first and foremost, a branding opportunity.

Just like Created Equal, Pepsi, and countless other organizations and institutions, Butler is making use of social justice vernacular, yet failing to follow through in the execution of its promises. If the university is going to draw on the now-buzzwords of social justice in its supposed diversity, inclusion and wellness, the administration needs to double down on their claims.

LiYonna McCallum, a senior journalism major, is one of many students who takes issue with Butler’s response to Created Equal.

“The university is on this whole ‘BU Be Well’ kick and is quick to throw around the recognition they get for it yet they dropped the ball here,” she said. “Mind and body is one of the prongs yet it didn’t seem like the emotional and mental components were taken into consideration.  Sure, BUPD was there to ensure ‘safety,’ but safety is more than just physical.”

No matter how you slice it, Butler’s action plan of not informing the community demonstrates a harrowing lack of care toward students.  It seems the university is more focused on the optics of neutrality instead of actually helping students “Be Well.”

At a university with a fairly large conservative population, the administration’s tendency to posture as politically nonpartisan isn’t of surprise.  The issue is, especially in this case, inaction is still a political action. The message is clear to students: they can handle it themselves, and, per Click’s email, the university is not accountable.

“[Students] were thrown by the wayside,” Harris said. “Giving students tools to make informed decisions is one of the most important parts of wellness. I think that we have a growing awareness of mental health in our generation, and transparency is crucial.”

No amount of equivocations and excuses can shirk administrative accountability for their planning in this situation.

Let’s be clear: it’s well-documented the university was aware of Created Equal’s plan to come in advance, and the group is known for their provocative measures.  Instead of prioritizing student awareness on very our own campus, Butler knowingly let down their community in the process.

Unlike protests at other localities, campus demonstrations take place at our doorstep.  Many students living in dorms and Greek housing came face to face with inflammatory images and rhetoric without prior notice. While Click suggests we warn our “spheres of influence” and “social media” about what’s transpiring on campus, such action requires fodder in the first place.  For her plan to work, many students would have to navigate around controversy, many of whom could be sensitive to the issues at hand.

Perhaps we can reflect upon Created Equal’s visit as an important reminder to practice what we preach. The ability to make informed decisions about handling circumstances like this is the exact type of administrative response that would foster wellness and inclusion on campus. Abortion is a sensitive issue, and students deserve to be informed what’s going on under the auspices of their own university.

As it stands, this incident is another example of Butler’s performative allyship, wherein the university has failed to follow up with its supposedly progressive ideals despite boasting about them for recruitment purposes.

You can’t have your cake and eat it too.  Either Butler can remain a corporate shill and continue co-opting progressive language for branding’s sake, or we can take the harder route and actually invest in the livelihood of our community — take your pick.