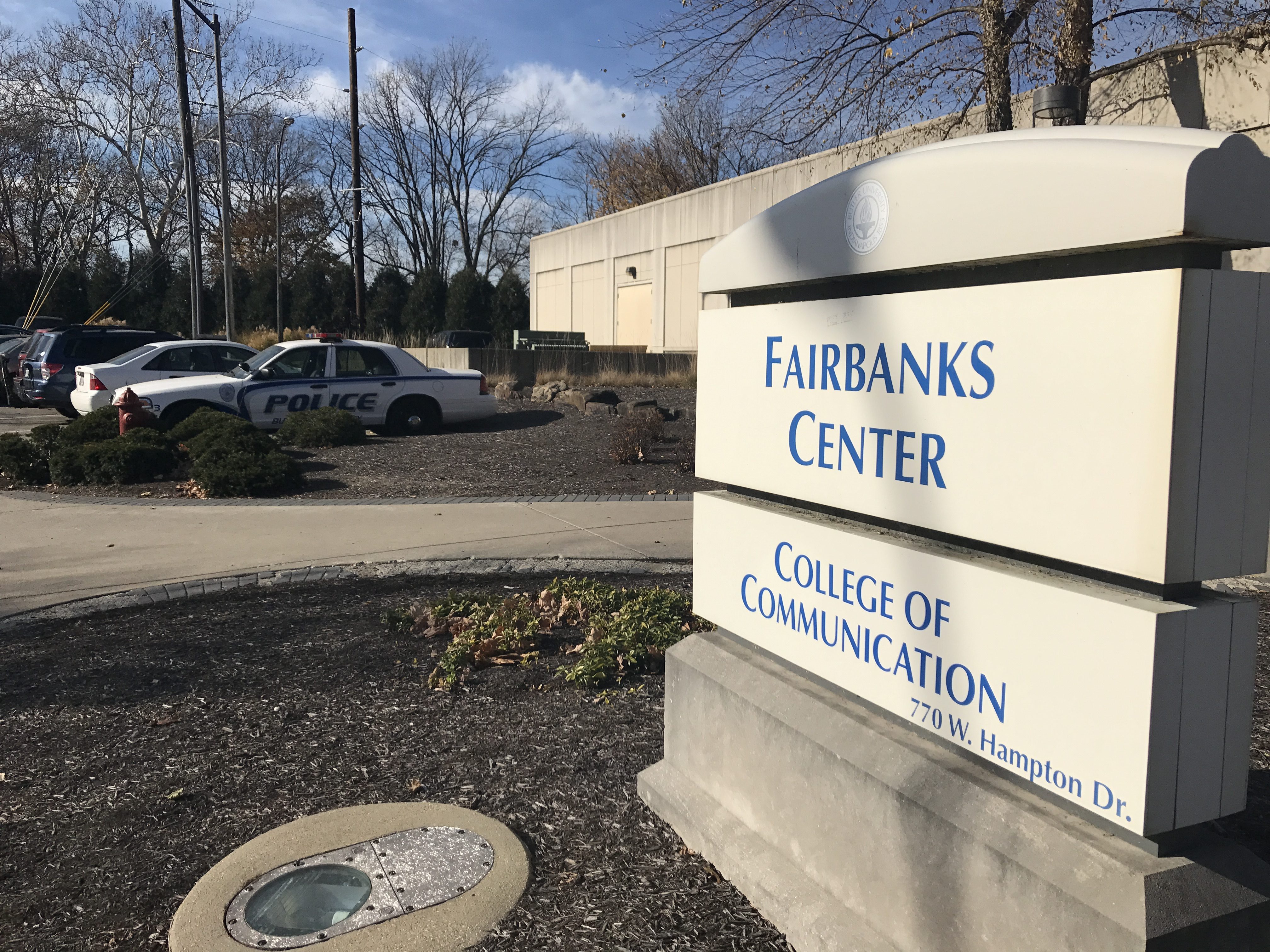 An active duty BUPD car sits outside Fairbanks, within sight of the entrance, during scheduled course time. Photo by Zach Horrall.

The course was taught this semester by Ann Savage, a professor in the critical communications and media studies department. She said she started considering the course when several public syllabi were being released during the summer of 2016.

The syllabus she saw, created by political historians, inspired her to teach her own version of the class: a special topics course. A special topics course is a generalized course that enables faculty members to offer a variety of specific courses whose subjects fall within a course’s conceptual scope.

In Savage’s case, she was the interim chair of the department at the time.

Jay Howard, dean of Liberal Arts and Sciences and interim dean of CCOM, said this particular case happened because people were shuffled around in the department.

“It was just a whole confluence of events that came together that caused the problem and hence the need to formalize the policy,” Howard said.

For general classes that are required for students to graduate, there is a rigorous process of getting courses approved. First a course is proposed, and then it goes to a department chair or a committee, the college curriculum committee and finally the dean for approval.

Provost Kathryn Morris said this course proved to the administration that a process was needed for special topics courses much like general courses have.

“There wasn’t [a process],” Morris said. “That was the problem. That’s what we have discovered as a result of this particular case. Because people said, ‘Who approved this course? How did it get into the course schedule?’ And there’s not been an approval process.”

Morris said the university acknowledges they should have a system in place, and that as the vice president for academic affairs, she requested the faculty senate create a process for getting special topics courses approved.

The new process, which will affect courses being submitted for the fall 2018 semester, requires faculty members who create special topics courses to draft a course description and complete a form provided by the university’s curriculum committee.

Once it gets to the respective college’s dean, that dean has three business days to review the course description and provide feedback on any non-academic concerns. If the dean approves the course, it goes to the registrar and is considered approved.

The dean has the option to provide feedback and send the course back to the department chair.

In that scenario, the respective college curriculum committee must review the proposal, the dean’s comments and the department chair’s response before deciding whether to approve or reject the course.

The university curriculum committee’s fall 2017 report stated that the committee and the faculty senate “realized that a new review policy was needed after the spring 2017 media coverage connected with a special topics course in CCOM.”

According to the report, the committee met with many sources, including the faculty senate, provost, deans, registrar’s office and individual faculty members before completing the new review process.

This semester, Morris said a temporary process for special topics courses was in place this semester. It included having a group of faculty peers review a course proposal before moving on to the dean for final approval. Morris said with this process, faculty members could express concerns they might have had.

Morris added that the new process is like a stop gap measure so the university knows what special topics courses are going to be a part of the curriculum.

The reaction in the fall of 2017 that put the curriculum committee in a position to take these measures came in May when school was out of session for the summer.

On May 4, media outlets caught wind that Butler was offering a course that, as many interpreted the original course description to say, would teach students strategies for resistance.

It was first picked up by The Heartland Institute. Next, Washington Examiner; then, Fox News. The story gained traction from there, getting picked up at places such as the Indianapolis Star, Time and Chicago Tribune.

On May 5, the university issued a statement from Morris to students, faculty and staff regarding the news of the course and defended it, citing academic freedom.

“The course adopts a stance critical of Trump — one that falls under the auspices of academic freedom,” according to the statement. “Just as I support this course, I would support a course that is complementary of the president. Butler offers a variety of courses that tackle controversial topics. Like any university, Butler should — and does — promote an environment of critical inquiry and engagement on controversial and unpopular topics.

“The perception that students are required to participate in activism is more problematic. The university would not require a student to support or oppose a particular political figure or agenda.”

The news regarding this class took another turn over the summer in regards to university personnel.

On June 28, Morris sent students another email informing them that Edgerton was returning to the classroom effective July 31 and that Howard would take over as acting dean of CCOM on Aug. 1.

Morris did not want to discuss speculation that this course had something to do with Edgerton’s return to the classroom and referred to the June statement.

“I think the answer to that is no,” she said. “You are asking me to comment on somebody’s personnel status, which I’m not willing to do. I just don’t want to answer anything. Dean Edgerton and I certainly had conversations, but other than that I don’t think it’s appropriate to talk about that.”

Edgerton did not respond to several requests for comment.

The events that happened over the summer were just the beginning of a long road ahead for the university. By the very next day, Butler started taking several protective safety measures for the course, the classroom, building and university.

Over the summer, Butler hired an issues management firm, a crisis communications group that assists in diffusing and preventing future issues. A university spokesman said Butler hired the firm not just for this class, but to help with potential issues the university might have faced this year or in the coming years.

Butler administrators also reached out to Butler University Police Department the day after the news broke due to threats they said they received regarding the course. Continued discussions ultimately led to an agreement between the two entities on extra protection for the coming semester.

“I do know that we talked to BUPD about where should we place this class so we can make sure the students are going to be safe, because it’s all about student safety,” Morris said.

The biggest concern for the university was that external people not associated with Butler would attempt to make a statement related to this course. Morris said the concern for internal issues was not as prominent.

Because of that, the university confirmed the classroom for this course was only disclosed to the students and the faculty member “to ensure a positive learning environment for the students,” according to a statement. It is the only CCOM class this semester that does not have a publicly known location.

This semester, students who frequent the Fairbanks Building see an active BUPD cop car outside of the building and in plain sight of both entrances as a result of this course. Also, a BUPD officer walks through the building before, during and after the class session.

“We tried to conduct everything in a way where we didn’t disrupt anything,” BUPD Assistant Chief Tony Rivera said. “I think it has been more of a university matter. We didn’t have a real reaction. This was all just planning.”

Rivera added that this was the first time BUPD was requested for safety regarding a specific class and said the department has always been prepared for protests or riots.

“It doesn’t change the way we do our jobs,” Rivera said. “There was a heightened sense of awareness. You have to be more aware with these kinds of things.”

To further ensure safety, university administrators and BUPD agreed to have uniformed officers outside of Fairbanks at the beginning of the semester in case something happened regarding the class.

“Was there an increased police presence? Yes, there was,” Howard said. “And there continues to be. And some of that is simply good policing work. I would describe it as a collaborative decision. By saying ‘university,’ I mean police and other university administration were involved.”

Regarding the classroom this course takes place in, a deadbolt appeared on the door shortly after the semester began.

In Fairbanks, classrooms that have computers feature ID scanners on the door for student access. There are only two classrooms that are not computer labs, and the room for Trumpism & U.S. Democracy is one of them. The other non-computer lab does not have a deadbolt.

Morris said she did not know anything about the deadbolt and why it might be there. Mark Harris, technical services coordinator for CCOM, declined to comment for this story.

Outside of the threats of violence, the university also received threats from alumni who considered taking their money and donations away, according to a statement from Butler’s marketing and communications department.

However, the university said it will be hard to determine if this course was this exact reason why it may see a change in gift money, and it won’t know until May 31, 2018 when the university’s fiscal year comes to a close.

“Yes, it is true, at the beginning of the semester, there was noise and some threats to withhold donations by individuals upset about this class, but it will be hard to determine if an increase, or decrease, in giving is a result of this course,” according to the marketing and communications statement.

Seven months after the national headlines sent shockwaves through the university, Savage said if she could go back in time, the one thing she would do differently is she would have written the course description differently.

“If I knew then what I know now, I would have done a different description,” she said. “I don’t know if it would have gotten the same attention. I would have never expected it. I never thought this.”

“Obviously, in an age when it’s very easy to go online and say hateful, harmful things and maybe even make threats, you’ve got to take those things seriously,” Howard said. “God forbid that any of that should actually come to fruition, but you have to take it seriously just in case it does.”

Editor’s note: The College of Communication system mentioned in the story refers to the system Butler University uses for courses in which faculty members place their courses in the system to be approved and sent to the registrar’s office.