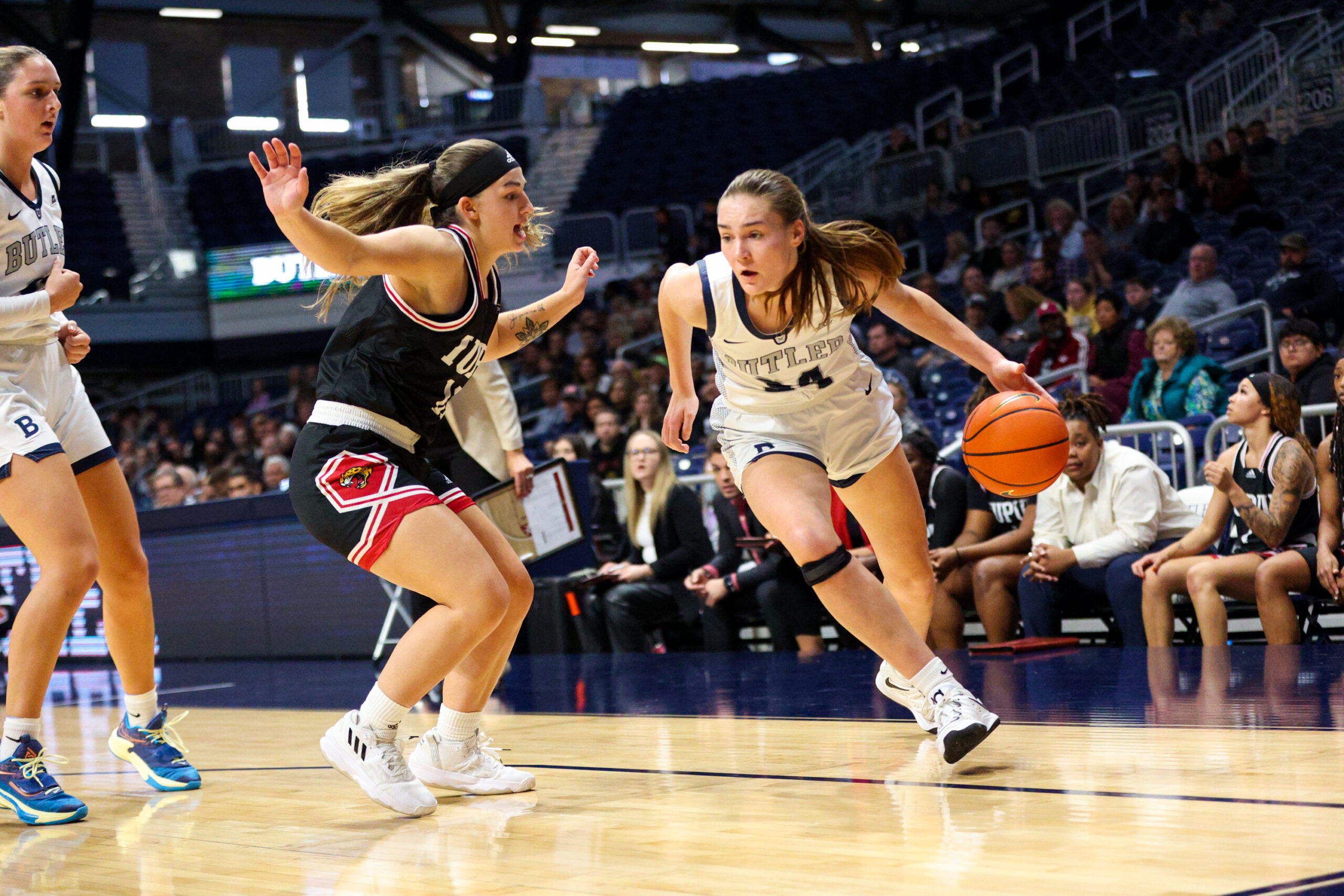 Junior forward Anna Mortag attempts to drive to the basket during the game against IUPUI on Nov. 13. Photo by Claire Runkel.

The women’s basketball team will head to Muncie, Indiana on Thursday for their first road game of the season to take on the Ball State Cardinals. After a 67-61 loss against head coach Austin Parkinson’s former team, IUPUI, the Dawgs sit 1-1 on the season and look to re-enter the win column.

The two teams previously met last season with Ball State taking the game 70-56. However, the Cardinals will see a completely different team with eight new players and a new coaching staff changing the dynamic of the Bulldogs’ play that Ball State saw last season. On the flip side, Ball State added five new players to their squad, including sophomore Alex Richard who transferred from Butler.

In the young season thus far, junior Anna Mortag has led the offense averaging 14.5 points per game and shooting 50% behind the arc. On the defensive side of the ball, graduate student Kelsy Taylor leads the team with an average of seven boards a game.

Here’s what you need to know about the Bulldog’s first road trip of the season.

Who: Butler vs. Ball State

Where: Muncie, Indiana at Worthen Arena

How to watch or listen: ESPN+

The Butler bench has proved to be a secret weapon for the team. In the two games thus far, the bench is averaging 36 points. It is a small sample size, but the effectiveness of junior Caroline Strande and Taylor coming off the bench is working for the Bulldogs. The two are in the top three of total points and rebounds for Butler.

After the matchup against Chicago State, Parkinson spoke about how the bench helped raise the level of play. When shots are not falling early for the starters, the bench will help provide that extra spark the Bulldogs need to jumpstart the offense.

Locking in on defense

This will be the third game of the season for both teams, so expect there to still be some troubleshooting on both ends of the ball.

Ball State’s sophomore guard Ally Becki was named to the Preseason All-MAC First Team. Through two games, Becki is averaging four points with 3.5 rebounds. Butler will want to keep an eye on her to eliminate any offensive surge, as she scored in double figures in 18 games last season.

While keeping an eye on Becki, Butler can not overlook Ball State as they finished 20-13 last season and are expected to finish second in their conference. The Bulldogs’ defense will be a key for success to come out with a win.

Although the Bulldogs have outrebounded their opponents both offensively and defensively, they’ve allowed the opposing team too many opportunities at second-chance points — 16 total offensive rebounds have resulted in 15 total second-chance points through the first two games. Butler stopping their opponent from getting extra possessions will be crucial to keep the score in their favor.