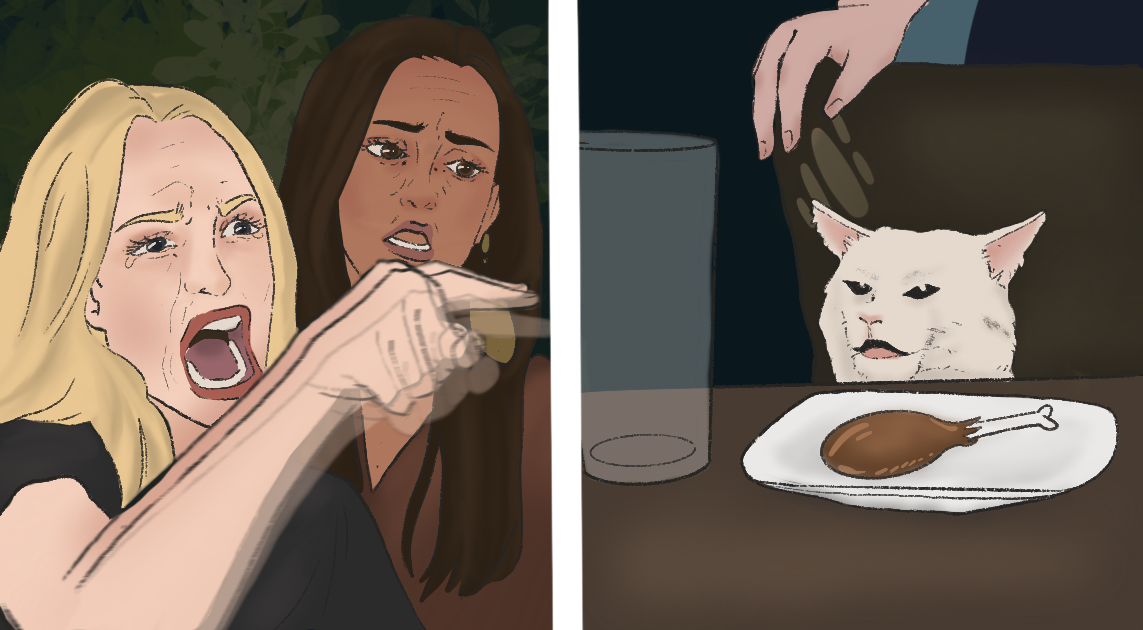 It’s important to avoid yelling during controversial conversations at the Thanksgiving table. Graphic by Haley Morkert.

The holiday season is, on the surface, the most wonderful time of the year. However, for many people, it’s also the most stressful. Almost everyone will have someone at the dinner table — whether it be your weird cousin, your aggressively racist pee-paw or your fire and brimstone, Westboro-lite aunt Karen — who will not hesitate to say something out of pocket.

As the MAGA-hatted, turkey-shaped specter of Thanksgiving looms before us, it’s natural for many to feel uncomfortable going home, especially if your identity has been assailed by one of your family members in the past. You may even want to stay away from home entirely. But, if you do decide to head home for the holidays and face the hate head-on, how do you handle those conversations eloquently and effectively?

Tom Mould, a professor of anthropology and folklore at Butler, presents active perspective-taking, a discussion strategy that involves empathetic storytelling.

“Before you start your conversation, identify a common experience related to the issue that the relative might have experienced, and ask them to imagine their own experience first,” Mould said in an email to The Butler Collegian. “Then share a story of someone impacted by the specific issue at hand.”

For example, if you’re trying to convince a homophobe that anti-queer discrimination is wrong, you might ask them to think of a time when they felt discriminated against for being different. After that, you would share a story of someone that was impacted by homophobia to try to create empathy.

While these conversations may frustrate you to the point that you’re ready to lace up your boots and march onto the battlefield, there’s a much more effective spot of land to journey onto. That territory is known as common ground, and for many of these issues, that’s the only way to end up anywhere near respect.

“A really important part is finding common ground,” Brown said. “It’s easier to find where you meet in the middle … instead of just starting with something you know is going to get people all riled up.”

As enticing as it may seem to fire out something controversial and watch everyone at the table’s face get red, it becomes easier to elicit respect by starting somewhere that’s a bit “easier” for seemingly difficult people to discuss.

Mould agrees with Brown and feels that it’s best not to approach uncomfortable conversations from a combative standpoint.

“Most of the time, we assume that we all share the same values, so if we yell loud enough, and argue hard enough, the other person will eventually see things from our perspective,” Mould said in an email. “That just doesn’t seem to work. Not at my holiday dinner table anyway.”

With these conversations, it can be easy to just say “f*ck it” and flip the dinner table on your ridiculous relative. While this would probably prove to be a cathartic experience, it’s generally more effective to try and keep your calm.

“I feel like every holiday dinner I am faced with these discussions,” Tinsley said in an email to The Butler Collegian. “From some of them, I am listened to and heard out, and by others, I am berated. Sometimes, you have to be the one who says, ‘I do not appreciate the way you are speaking to me.’ Your age, your gender or how you identify should never be a reason you do not speak up, ever.”

Preserving your safety and well-being is another important reason to keep a level head. Political conversations can be rather fraught, and yelling has the potential to turn into fighting pretty quickly.

Brown feels that it’s necessary to keep safety in mind before engaging in difficult conversations with family.

“I think the most important part is making sure your safety is the priority in those conversations. Brown said. “It’s more important that you’re safe and comfortable before having to address all of these things.”

For college students, this can be particularly problematic if you’re financially dependent on your family. Putting your educational future at risk is counterproductive; if you never learn how to change minds — which is what a liberal arts education prepares you for — you’ll never be able to do so effectively. Furthermore, if you’re in a space with abusive or potentially violent family members, it’s probably best to steer clear of these conversations. It’s frustrating to let ignorant and bigoted comments fly by, but it’s not productive to put your physical or mental health in jeopardy.

It’s imperative to note that comfort and safety aren’t synonymous. Uncomfortable conversations don’t have to be unsafe, and setting your boundaries is a way to ensure that these talks don’t drift into harmful territory.

If you have successfully set these boundaries and feel safe, it is paramount that you engage your family in uncomfortable conversations about social justice. Just in the last year, people around the country have seen their rights violently stripped away. Assigned female at birth individuals have lost reproductive rights, police violence against Black people is an everyday occurence, transgender children have lost their right to participate in school sports and climate change continues to disproportionately affect those on the margins of society.

Mould says that having these individual conversations can have a massive impact.

“We do change minds one person at a time,” Mould said. “We may do it with collective action, and we may do it one on one, but at the end of the day … groups are made up of individuals, and individuals are the people whose minds need to be changed.”

It might seem daunting, but social change happens one person at a time. As uncomfortable as these conversations can be, they are nonetheless important if we desire social progress.

In discussing the purpose of changing people’s minds, Mould pointed to a quote by the seminal anthropologist Margaret Mead:

“Never doubt that a small group of thoughtful, committed citizens can change the world; indeed, it’s the only thing that ever has.”