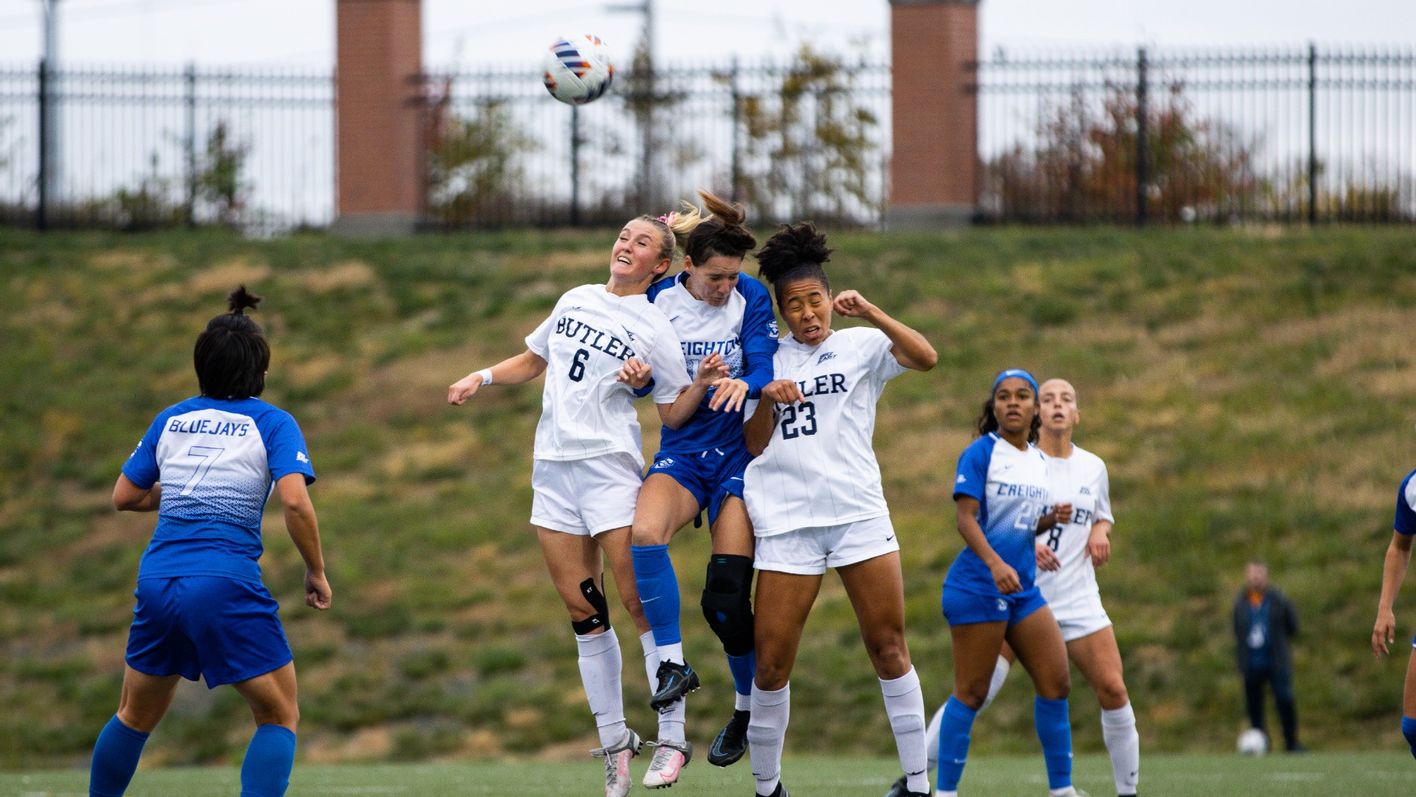 Senior Aliya Diagne and first-year Amelie Darey go up for a header against the Creighton Bluejays on Oct. 30. Photo courtesy of Chandler Hart from Butler Athletics.

In a must win or tie game, the Bulldogs achieved the latter and earned themselves a spot in the Big East Conference Championship as the fourth seed with a 1-1 tie with Creighton. During the 16th minute, first-year standout Talia Sommer stole the ball from a Bluejay at the halfway line, carried it all the way to the penalty area and avoided the keeper to see the ball fall into the net, giving the Dawgs an early 1-0 lead. There would not be any more scoring action until the 53rd minute when a deflected ball near Butler’s penalty area found its way into the net to even the score at one. Both teams took shots on goal until the final time, but neither could find the open net. Coincidentally, Butler would see Creighton three days later in the opening round of the tournament.

The women’s swimming team competed against the Falcons in Bowling Green, Ohio where they lost the meet 192-70. Butler competed in 16 total events with first-year Megan VanValkenburgh taking first place in the 100 Free and first-year Caroline Zimner taking first in the 200 Back.

The women’s volleyball team fought a tough battle against No. 16 Marquette on Friday night, but unfortunately dropped the match 3-0. The Bulldogs could not quite find their stride in the opening set trailing most of the way and dropped the set 25-15. In the second set, Butler led the majority of the way until the final points falling 26-24. Butler battled in the third set with the Golden Eagles, but couldn’t finish the climb to complete the comeback and fell 25-21. Junior Amina Shackelford led the offense with 12 kills paired alongside 12 digs earning herself a double-double in the match. Sophomore Mariah Grunze added 11 kills to Butler’s total of 37 and first-year Cora Taylor dished out 29 assists.

Butler finished fifth at the end of the regular season championship race. Standout redshirt senior Mia Beckham ran the best Bulldog time of 20:33 and finished eighth in the race to be named All-Big East.

Butler finished fourth out of nine teams at the conference championship. Graduate student Barry Keane finished first overall with a time of 23:15 and earned All-Big East honors for finishing in the Top 20 .

Butler football coasted against Morehead State with a 56–20 win on Oct.29. The team scored 42 points in the first half to help continue their 5-0 dominance at the Sellick Bowl. Redshirt junior quarterback Bret Bushka threw for 195 yards with eight completions and two touchdowns to lead the Butler offense. Redshirt sophomore Joey Suchy rushed for a team high 99 yards including a 21-yard run opening touchdown. Butler’s defense held Morehead State to 49 rushing yards with redshirt senior defensive back Connor Reid racking up nine tackles. The 36-point margin victory was the program’s 600th all-time win.

The Bulldogs and Pirates battled in a defensive match through 90 minutes of play to finish with a 0-0 draw in New Jersey. Fifth-year goalkeeper Gabriel Gjergji saved three Pirate shots on goal to keep the game level. With the draw, Butler clinched their spot in the Big East Tournament that will be played later this month.

Hinkle Fieldhouse was ready for the men’s basketball season opener against Tiffin. Although it was an exhibition game, the Dawgs’ talent was on full display during the 75-65 victory. In the first half, Butler never trailed despite going 2-9 from the line, but the defense kept the Dragons to 10 made field goals in the half. Tiffin would cut the lead to as low as one in the second half, but a 17-point half by sophomore guard Simas Lukosius proved too much for the Dragons’ defense. Purdue transfer Eric Hunter Jr. and North Carolina State transfer Manny Bates both showcased their impact on Butler’s offense scoring 17 and 16 points, respectively.

Three days after their 1-1 draw, Butler and Georgetown competed in another thriller during the quarterfinals of the Big East Tournament. In the 72nd minute, Bluejay sophomore Azumi Manriki headed the ball into the Bulldog net off a Creighton corner kick giving the Jays a late 1-0 lead. Heading towards the end of regulation, Butler redshirt junior Abigail Isger drilled the ball into the Creighton net and tied the game 1-1 during the 83rd minute. Both teams would not be able to connect in the final minutes of regulation, sending the game into overtime. After two extra periods, the score still stood 1-1 and prompted a shootout. In the third round of penalties, Butler was unable to convert and thus lost the game, ending their season att 7-7-5.

The volleyball team secured the comeback against DePaul 3-2 on Oct. 30. In the opening set, the Bulldogs were not able to find their groove and trailed the majority of the set. Butler scored three straight points towards the end, but it would not be enough to overcome the Blue Demons’ offense and dropped the set 25-21. In the second set, Butler went on a 4-0 scoring run to tie the game at 15, sparking the Bulldogs’ offense to close the set 25-20 and tie the match at 1-1

After the break, Butler nabbed an 18-13 lead, but the Blue Demons found the empty court and stormed their way back to take the set 25-23, pushing them to 2-1 in the match. The fourth set was not much competition as the Bulldogs went on a 9-0 run to propel them to a 25-16 set win. With a set that only went to 15, Butler jumped ahead to an early 4-1 lead, but the Blue Demons kept themselves in the set getting within one at 14-13. Sophomore Destiny Cherry put down the kill to pull off the victory and also hit for a career-high with 17 kills off 32 swings.

The men’s basketball team finished another successful exhibition game with a 91-55 victory over Davenport at Hinkle. The start of the first half was a tight contest with four ties before Butler’s offense would start to breakaway and take a 45-33 heading into halftime off of redshirt freshman guard/forward Pierce Thomas’ dunk. Butler carried their momentum going on an 8-0 run to open the half, closing out the game. The Dawgs shot 63.9% from the field improving by 17% against Tiffin earlier in the week. Junior guard Chuck Harris led all scorers with 22 points and sophomore guard Simas Lukosius added 15 to the Bulldogs’ 91 point effort. Butler will look to carry their success into the regular season starting with New Orleans on Nov. 7.