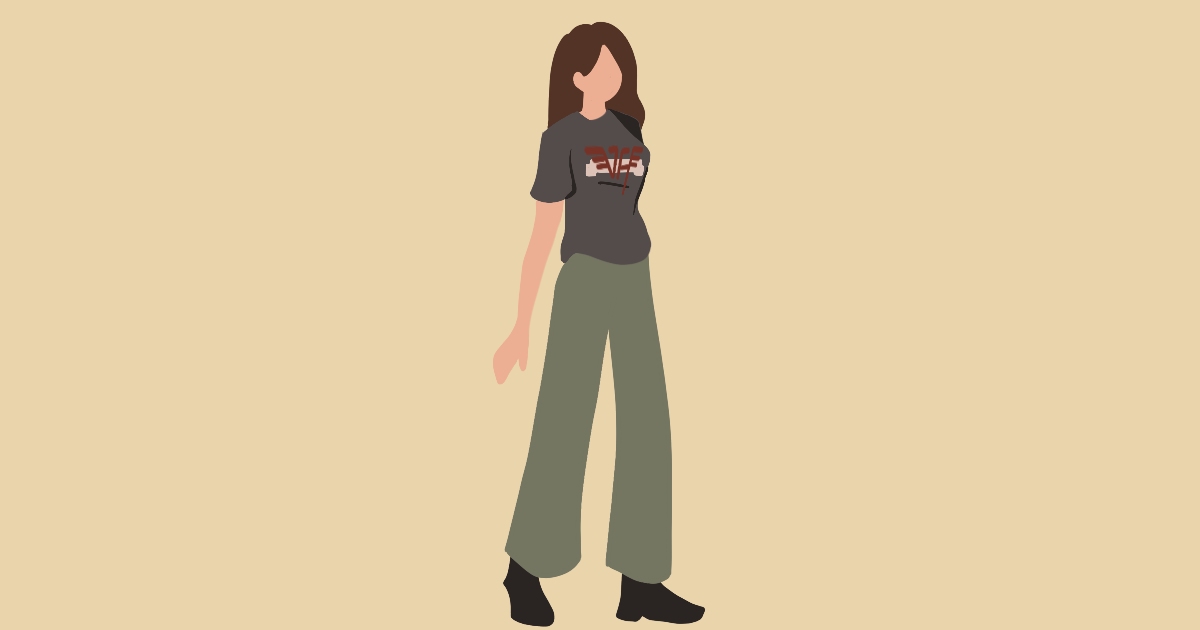 It’s time to stop shaming women for what they wear. Graphic by Haley Morkert.

If you’ve spent virtually any time on TikTok lately, you’ve seen the videos of guys with a tiny mic approaching random people and asking questions, specifically men asking women. While a lot of these videos are playful, there’s a particular brand of this video that’s left a particularly foul taste in my mouth. There is a recent trend of approaching people wearing band tees and aggressively asking them if they’re able to name three songs from the band on their shirt.

Now, it’s not the overall nature of this trend that bothers me. I recognize that it can be funny to see people who bought the merchandise simply because it looked trendy. The aspect that makes my eye twitch and my stomach churn just a little is that the majority of these videos are young men berating women on the street.

The unchecked male chauvinism that the men in these videos present is entirely sickening. Do some women wear merch just for the sake of wearing it? Of course. But the over the top, dramatic reaction that these men have when a woman actually can name three Nirvana songs just shows that they’re falling victim to age-old ideology that women are shallow, and are anomalous if they listen to rock music or do have the evolved music taste to enjoy it.

Misogyny is present in a lot of peculiar places, but TikTok is a place where it is particularly prevalent. I’d even argue that misogyny is trendy on TikTok with the success of Andrew Tate reposts and the “What would you rate her on a scale of one to ten?” videos continuing to get millions of views.

First-year marketing major Megan Campbell is wary of wearing band tees in public for fear of being put on the spot and publicly shamed.

“Just because someone is wearing a shirt based on a band or a song doesn’t mean they should be questioned about their knowledge of it,” Campbell said.

Women fear enough on the streets as it is; we don’t need random men accosting us for our listening habits. This trend makes it so the fear continues as women are flooded with comments on these viral videos that are so degrading it’s almost unbelievable.

The comments on these videos, from men, are tearing down these women for being “posers” at first. But, the comments have gotten increasingly worse as the trend has continued to the point of tearing down a woman’s intellect based on gender to simply just using female-targeted hate speech towards them.

Along with the dissecting of a woman’s intellect, the core of this trend centers around the idea that men think that women are shallow. Believing that women can’t listen to grunge music comes from this long-held notion that women are too shallow to appreciate musical excellence without stereotypically feminine visuals.

I spoke with Maya Rench, a first-year marketing major, about the logic she believes men make when they go after women.

“I just feel like their first instinct is to come to girls [in these videos] because they’re gonna be like, ‘Oh, she’s not gonna know that band,’” Rench said.

It’s an interesting word to use – “instinct” – which is what is happening here. It’s an instinctual action for these men to believe that women only enjoy what they believe to be “feminine music.” This is what’s leading to the hateful speech used in the comment section because these women are viewed to be lesser than for not listening to what’s viewed as masculine music.

The worst part about this trend is the platform itself is built to support these kinds of videos. TikTok has implemented the “TikTok creator fund” which allows creators with certain amounts of views and engagement to receive payment from the platform. The TikTok creator fund has, from what I can find, absolutely zero form of a filter in it to distinguish between problematic viral videos and harmless ones. Meaning: the more hate, the more views, which gives these men quite a lovely paycheck.

If men are recognizing that hate is what is making them money, then misogyny is one heck of a way to cash in. The band tee trend is where the bank is because it continues to get more and more views. But it’s scary to think that platforms are allowing men to profit from the belittling of women simply because they’re getting views and massive amounts of comments.

What’s even worse about this idea is that the men doing these trends don’t care who they’re hurting, as long as they’re getting paid. When these videos get this many views, the TikTok creator fund kicks in, and that’s where the money starts to roll in.

Even with the creator fund, TikTok is not doing anything to monitor what kinds of videos they are rewarding with monetary compensation. Kennedy McMahon, a first-year biology major, discussed her issues with TikTok as a platform in addressing misogynistic trends.

“If [TikTok] maybe spoke out about it a little bit, [it wouldn’t be so toxic].” McMahon said. “I just feel like they don’t really know what’s actually getting all the views.”

While misogyny may be harder to censor than physical violence or nudity, it should not be getting rewarded with financial benefits by the platform. It’s setting the precedent that hate towards women is something that sells, which is not ever an idea that should be allowed to flourish.

McMahon also talked about the fact that this treatment — that is exclusively towards women —  hasn’t just begun because of TikTok.

The fact that McMahon’s experiences are so far apart through her life just shows that men have carried this idea for far too long. Now, it’s just in the spotlight.

“Personally I feel embarrassed [by being put on the spot],” Rench said. “Everyone has the right to wear whatever they want, no matter if it relates to them or not.”

This line of thought coming from Rench just proves how this trend has vastly altered women’s way of thinking. The fact that she even has to feel embarrassed shows how men are conditioning women to think. There is nothing wrong with wearing something just to wear it. It doesn’t have to mean anything to you. If you like it, wear it.

Most of the women in the comments of these videos share this same feeling: embarrassment. They’re looking for comfort in the comment section, highlighting how if they were put on the spot, they wouldn’t know what to say either. We have no idea if the women in these videos know the songs or not; they might just be scared because some guys are shoving a camera in their faces.

It’s hypocritical of these men to expect everything we wear to be deeply meaningful to us. Men want the band to mean something to us, right? But I’ve seen some shirts on men that are absolutely appalling or downright absurd — like shirts with literal random naked women on them. How is it okay for them to wear that, but not for a woman to casually wear a Van Halen T-shirt? This emotional attachment argument holds no water when the tables are turned.

If they’re telling the world that your shirt’s words and pictures have to mean something important to you, then they are the ones that should probably change.

If we allow these things to keep happening, the trends are going to continue. As we’ve seen, the TikTok trends continue to get more problematic as they gain traction. Who knows what they’ll come up with if they think the more hate, the more views they get.

Something has to be done to stop the action first and the ideology second. It’s quite obvious that this thinking is not new, but maybe start telling men that women can enjoy music for more than some reductive stereotype of what men think women like. Maybe women enjoy the music, and maybe they don’t. Why do you care?