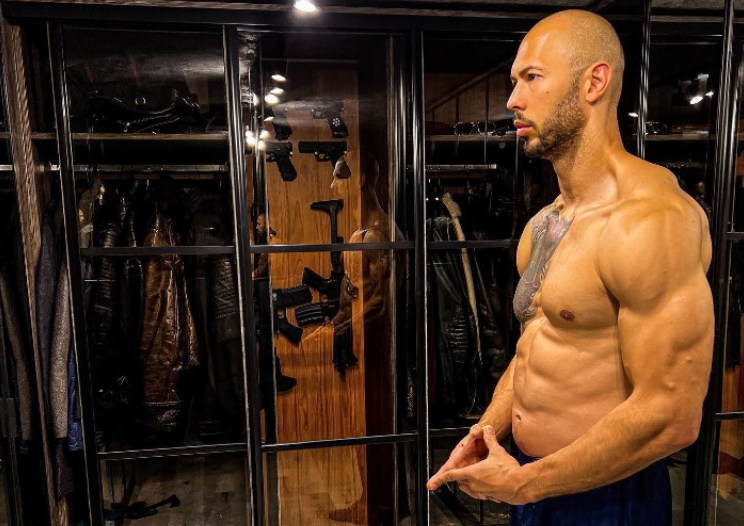 Tate, once a kickboxer, is facing criticism for his personal ideologies which have taken social media by storm for better or worse. Photo courtesy of talkSPORT.com.

“Rape victims should bare some responsibility against them.”

“My woman is very well trained.”

“If a woman is going out with a man, she belongs to that man.”

These are all statements made by Andrew Tate. This infamous internet personality has racked up millions of views for his hot-takes on dating and relationships. The ex-reality TV show participant, boxer and “trillionaire” has proven the power of patriarchy in conjunction with hypermasculinity. Hypermasculinity can be defined as the exaggeration of male stereotypical behavior, such as an emphasis on physical strength, aggression, and sexuality. Tate weaponzies his take on masculinity by confusing violence with asserting dominance.

From monetary gain to social currency and extravagant sports cars, his image seeks to capitalize on patriarchal power. His content is directed towards young men and errs on the side of alt-right, extremist views. Tate’s content is used as a segway into creators such as Alex Jones, a prominent conspiracy theorist. Both of whom have been associated with far-right organizations and political figures such as former president Donald Trump. Additionally, Tate is currently under investigation for sex trafficking and holding a young woman against her will in his house.

Tate’s appeal to the younger generation stems from playing into their insecurities about dating and monetary gain. As a result, Tate’s method blames women and markets them as inferior to men, promoting initiatives of “bringing masculinity back.” Critics say his online presence is doing more harm than good by objectifying women and promoting patriarchal violence.

“[His listeners seem like] women-hating, very easily influenced and gullible men who don’t have the ability to think really critically and look past what is being said in front of them.” Allen said.  “[Tate’s views are] very [misogynistic] and narrow minded. I think that he believes that he is right, and nobody else is. If a person disagrees with him, they are just a ‘hater’ or a ‘loser’ or someone who doesn’t know how to ‘grind like a G.’”

Critics say that Tate’s misogyny encapsulates more than a prejudice against women; it reeks of dominance-seeking and mirrors incel behavior. Incels, short for “involuntary celibates,” are a rising group of mostly men on the internet who believe women are inferior to them, yet owe them sexual encounters. They also believe in the degradation of women and will often act violently towards them. Their ideologies are rooted in similar values to Tate’s, creating a hazardous pipeline of extremist perspectives. Tate’s alignment with such ideals could radicalize impressionable individuals to equate violence — particularly against women — with dominance and riches.

“I’m disgusted that he views women in such a way as something to be used,” Eazell said. “[They are] subjugated almost, and it feels like he just wants them as a commodity.”

Tate’s appeal to young men appears to begin with his many cars or riches. However, once people begin to start watching his content, his beliefs about women and dominance encroach upon the impressionable and their worldviews. Lillie Foley, a senior race, gender and sexualities study major and president of Gender Equity Movement, is concerned about Tate’s rise to fame and audience.

“I definitely think there are people who sort of began to listen to what he had to say in an ironic sense, which is still hurtful,” Foley said. “They’ve [also] listened to him so much that they take what he’s saying seriously. To me, it’s just unbelievable.”

Fans of Tate interpret his word as gospel, proving the tangible effects of his appeal. While the mass popularity of figures such as Harry Styles who test the confines of gender roles and gender expression shift such concepts into mainstream conversations, characters like Tate remind us that the alternative ideas of radical violence and misogyny also find large platforms. If prominent figures like Tate continue to ascend the ladder of social hierarchy, people of all genders will feel the effects. Eazell believes the implications of figures like Tate will negatively affect men’s world views and women’s safety in the future.

“It’s gonna have an impact on how they treat women and women’s experiences with toxic men,” Eazell said. “These men who should know better are going to be putting his words into practice, and that’s sad for them.”