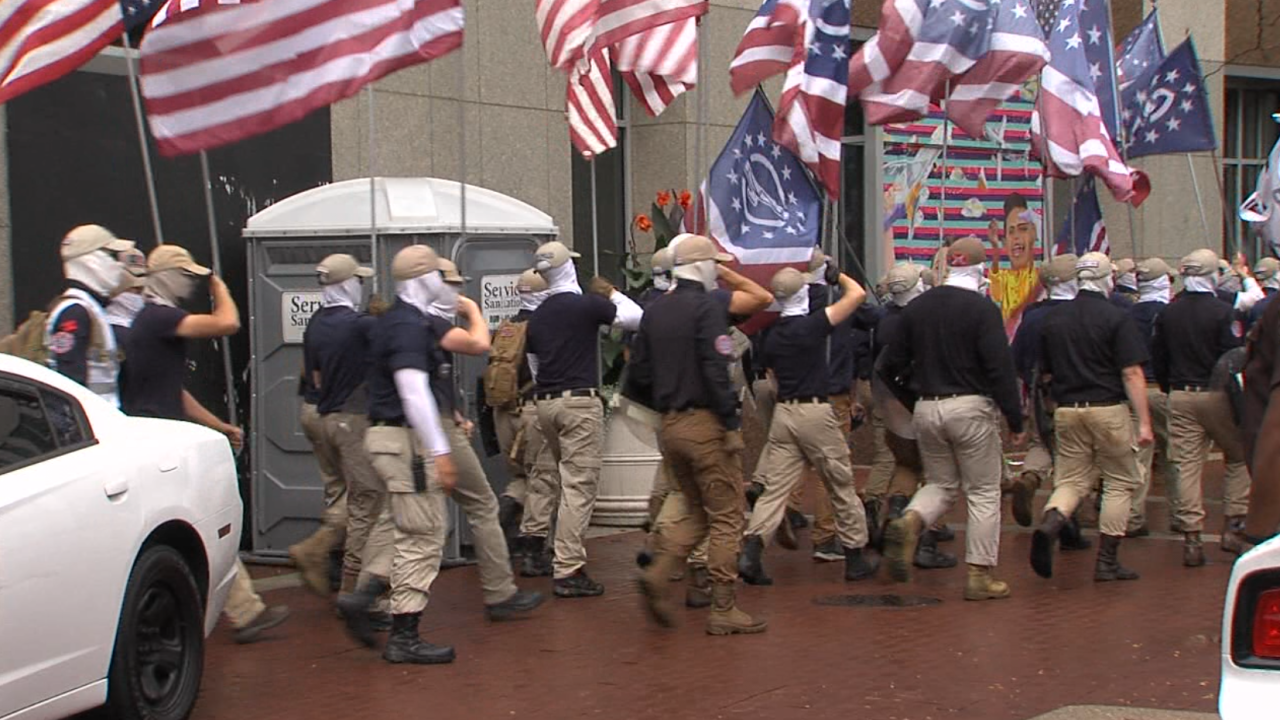 Last Saturday, Sept. 3, Patriot Front — a white nationalist group — marched through downtown Indianapolis with signs saying “Reclaim America” and “America for Sale.” The group chanted “life, liberty, victory” as they marched from the American Legion Mall to the Indianapolis Public Library and back.

Indianapolis Mayor Joe Hogsett denounced the march a day after it took place, and questions were soon raised on social media over whether the group had a permit to march or not. While some were quick to assume that the group was out of legal bounds, city officials said a permit was not needed.

According to the Southern Poverty Law Center, SPLC, Patriot Front is a nation-wide white nationalist group founded after the “Unite the Right” rally in Charlottesville, Va. in 2017. Patriot Front is an offshoot of Vangaurd America, a group prominent during the Charlottesville riots. The group’s anti-semitic and racist rhetoric led to its designation as a hate group by SPLC.

Sophomore theater major Samie New is Jewish, and she said that coming from her home state of New York, she expected more anti-semitism in Indiana. New said she was upset by the news of the march downtown but not surprised. One thing she did not expect, however, was the lack of response from Butler students.

“On Instagram, I always see people reposting a lot of social justice posts,” New said. “But I really did not see as many people posting stuff about this, which I was really surprised about.”

Liam Moore, a junior critical communications and media studies major, said he was also surprised by the lack of response from both the university and Butler students. He said the Patriot Front march reminded him of @proudamericabu, an Instagram account run by Butler students that sparked controversy last semester, along with stickers he has seen around campus.

“There’s that … organization [@proudamericabu from] last semester, which is kind of strikingly similar to Patriot Front … ,” Moore said. “And I think some of the sentiments shared by the protesters are kind of relevant to some people [at Butler] as well.”

“They’re doing something called abstract advocacy, which is saying, ‘We should take back the country,’ whatever that’s supposed to mean for these people,” Patrow said. “But they’re not saying these are the actions we’re gonna take … so that’s generally seen as more protected speech.”

Patrow said Patriot Front’s speech was protected, and those who oppose the group’s message are likewise allowed to criticize their message and counterprotest — as long as it is within the bounds of the First Amendment

Lake, who is running for Congress in Indiana, said in a statement to WFYI that plans for a counter-protest are underway.

Patrow said voting and speaking out against hate speech is the most effective strategy for students who are disheartened by the march to contribute.

“The best way that they can enact change is organize counter-speech and vote,” Patrow said.