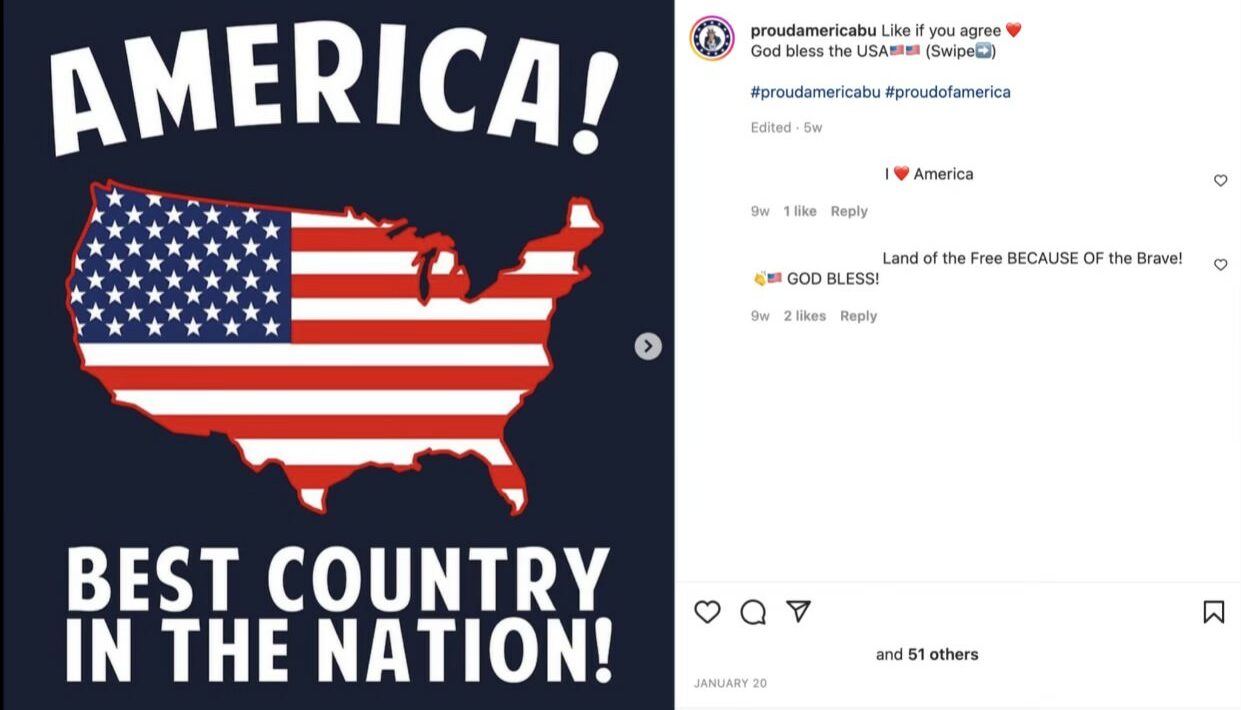 During winter break I started seeing posts from an account that was at that time called “patriotboundbutleru,” espousing beliefs like “Abortion is Murder,” “There are only two genders,” “ALL lives matter,” and other Fox News-esque drivel.

Several students, including myself, who took issue with the content shared on the account criticized the account on their Instagram stories and called on the university to denounce its hateful messages. Ironically, some of the students who presented fair criticisms were blocked by the account, thus shutting down the discourse the account claims to promote.

Sam Jones, a first-year vocal performance major, was one such student that was blocked by the account after criticizing one of their posts.

“One [post] that I know a lot of people got really upset by was one where they listed a whole bunch of values of the club,” Jones said. “A lot of them were either just misleading, false statements or borderline hate speech … I started [tagging] Butler after [the account] made [that post] and … I guess that’s what led to them blocking [me].”

After the initial wave of criticism, the account went private. The group has recently resurfaced under the name “proudamericabu” and continues to post a wealth of nationalist nonsense with a fun splash of transphobia, misogyny and capitalist bootlicking.

For the record, Proud America declined to comment on this story.

Although the account appears to be a club at surface level, their lack of central organization and activity on campus suggests that they are more of a fringe movement.

Despite their asinine rebrand, the content of the account has generally stayed the same. A recent post about “protecting women’s sports” is predictably transphobic and particularly vile. Posts like this go beyond the realm of idiotic but harmless to straight up hate speech. Let’s be clear: trans women are women and trans women are not dangerous.

The images posted on the account seem to imply that transgender women are men, which is ridiculously transphobic and has been shown to damage the mental wellbeing of trans individuals. The account also claims that trans women harm “the integrity of women’s sports,” even though there is no conclusive evidence that supports the myth that trans women have an athletic advantage. Furthermore, the claim that “women are special” and thus need protection is so patronizing and sexist it makes my skin crawl.

Nate Morgan, a first-year accounting major and a member of Proud America, feels that it is important that people be able to respectfully disagree with one another.

“I know that there have been some things posted on that account that are very debatable subjects, especially in this day and age,” Morgan said. “The main thing [is that] you should be able to express your opinion and if someone completely disagrees with you [that is] fine. But even if you completely disagree [with someone] you should just let it be.”

Disagreeing with one another is all well and good until we begin to put human rights up for debate. Hate speech like the transphobic venom Proud America disgorges puts a person’s fundamental human rights into question, and that is not fine.

Bill Watts, an associate professor of English, identifies another concerning theme in some of the Proud America posts.

“There is a strain of jingoism in [the posts] that I don’t like,” Watts said. “I think that if someone says they’re proud to be an American … I don’t really have a problem with that. But if they want to say that people who are critical of the United States don’t love the country and are somehow not patriots, that seems to me to be a formula for discrediting people.”

One of the many ironies of this group, which claims to be non-partisan and in favor of promoting discourse, is that the posts on the account are essentially far–right, nationalist propaganda. Whether intentional or not, this kind of content creates division on campus.

The blind devotion to America that is expressed within these posts pushes Proud America from the realm of patriotism and into that of nationalism. Statements like “support for an America first agenda” and the idea that other nations “Hate us cuz they ain’t us,” place the United States above other nations. That is literally the definition of nationalism. This kind of nationalism can lead to deeper political divisions and xenophobia and is therefore dangerous.

“I think [this] is people on this campus just trying to show that they’re pro America [and] they love the United States no matter what,” Morgan said. “I think a lot of people try to — especially on this campus — make it sound like it’s good versus evil when really, I think the purpose of it is just for people to express how much they love America no matter what.”

Why would a group that wants to express love for America from a non-partisan perspective create a President’s Day post featuring former President Trump instead of the current president? Why would this group use canned slogans ripped from Turning Point USA, an organization that has been widely criticized for its white supremacist ideas, transphobia, misogyny and homophobia?

Proud America’s Presidents Day post features former President Trump. It is worth noting that although Proud America claims to be non-partisan, there are no Democrat presidents featured in the post. Image courtesy of Proud America BU.

According to Watts, although Proud America alleges to be in favor of promoting discourse, they seem to be doing just the opposite.

“I guess one of the things that bothers me about this is that it takes arguable positions and represents them as the only correct one,” Watts said. “I think that the most alarming thing about these posts [is] that they are substituting mantras and canned sayings for thought and I think that’s always a dangerous thing.”

The use of phrases like “socialism sucks” and “abortion is murder” are reductive and lack any nuance whatsoever. Asserting that such phrases are the objective truth shuts down any potential for intelligent discourse because there is no actual critical thinking behind them.

Some students have tried to reach out to discuss the issues presented by the account with the group, but have been shut down. Prior to being blocked by the account, Jones said they unsuccessfully attempted to engage in a conversation with them.

“I tried DMing the account just to see [their] perspective … and [to] use this as a chance to educate,” Jones said. “But when someone’s coming back and just turning it into an argument, you can’t really do much.”

The DMs between Jones and patriotboundbutleru, now Proud America, which Jones posted on their Instagram story. Images courtesy of Sam Jones.

Fortunately, the presence of Proud America on Butler’s campus seems to be fairly minimal. According to Morgan, the group has not yet had an official meeting due to scheduling conflicts. Furthermore, Proud America has not been endorsed by SGA and therefore is not an official student organization. Because it is not endorsed by the university, Butler does not have the power to shut down the group.

While Proud America may have a small presence on campus, the content that it posts and the values that it stands for are deeply problematic. Therefore, it warrants our attention and condemnation. We need to be wary of this brand of thoughtless hate and nationalism on our campus so we can stop it before it grows any larger. In the meantime — if you disagree with white supremacy, transphobia, nationalism and misogyny — report them on Instagram.